It is best not to get between the organizers of "Domino Day 2005" and their precious tiles. The price? Death, as one sparrow found out. 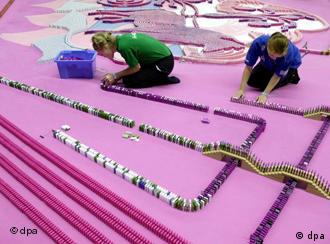 Don't mess with them

For a precious few seconds, the hard work a team of domino fanatics had put into painstakingly setting up more than 4.1 million dominos looked in danger of collapsing before their eyes.

A sparrow had somehow snuck into the hall where the Domino team would look to break the domino world record during a show broadcast live on private German TV channel RTL this Friday. The bird knocked down 23,000 tiles and there was nothing anyone could do.

After calling in an animal expert who tried unsuccessfully to catch the bird, the angry domino fans opted for heavy artillery. A hunter took aim and shot the sparrow, ending the threat to the World Record attempt.

"Regrettably it was the only option," said one of the team members. 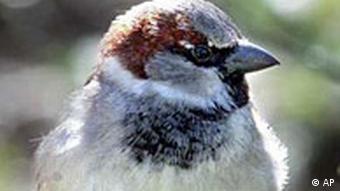 He should have stayed away from the dominos

RTL said the team did all it could before ending the bird's life. The world record attempt -- during which the domino team will try knock down 3,992,398 of the 4,321,000 tiles set up for the event -- doesn't appear to be in danger.

"We can rebuild everything with a few overtime hours," they said.

German soap opera and television institution "Lindenstrasse" celebrates its 20th anniversary in December by welcoming a certain Stetson-wearing guest star from across the Atlantic. (Nov. 14, 2005)

The best of DW-WORLD's "From the Fringe"

Fooling Around on the Farm

A new reality TV show launched by private network RTL has got farmers up in arms. It charts the efforts of a hapless group of ruddy-cheeked swains to find a wife, and farmers' associations say it's offensive. (Oct. 16, 2005)