Authorities in the Chechen city of Grozny have said that at least eight people were killed late Tuesday when three suicide attackers blew themselves up near the region's parliamentary building. 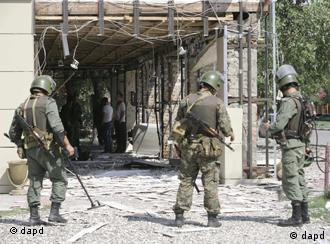 Several police officers were killed in the suicide blasts

At least eight people were killed and more than 20 injured when suicide bombers struck the city of Grozny in Russia's south-western Chechnya region late Tuesday.

An attacker blew himself up at a police post some 150 meters (around 150 yards) from parliament, killing two officers, an Interior Ministry official told news agency Reuters. Two more bombers followed with a second attack once more police and emergency workers had arrived on the scene.

At least seven police were among the dead. Twenty-two others were hospitalized after the blasts, five of whom were believed to be in a critical condition.

Chechen leader Ramzan Kadyrov told Russian news agency Interfax that one of the bombers was the brother of a man who carried out a suicide attack in Grozny last year. 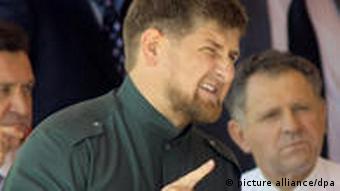 Kadyrov has been trying to encourage investment in Chechnya

The attack was the worst in years in the North Caucasus region, which has been the focus of significant reconstruction efforts after two post-Soviet wars against separatist rebels there.

Kadyrov has sought to portray the region as a safe-haven for investment and stability, but this has been undermined by sporadic violence.

But signaling this approach was unlikely to change, Kadyrov was quoted Wednesday by Interfax as saying he was convinced "that only tough, uncompromising measures can uproot this evil."

The Kremlin has announced the killing of al-Qaeda's top militant in the Caucasus following a security operation in Chechnya. "Moganned" is known as a religious authority and top coordinator of the Islamist insurgency. (22.04.2011)

Chechnya, where stability comes at the price of secularism

In the Russian republic of Chechnya, the clock is being turned back as Islamic law creeps into public life. The state's leader, Ramzan Kadyrov, is pursuing policies that promote polygamy and headscarves for woman. (07.04.2011)