A car bomb has hit the heart of Ankara in an area close to parliament and armed forces headquarters, killing at least 28. Leaders from the US, Germany and the UN have expressed their solidarity with Turkey. 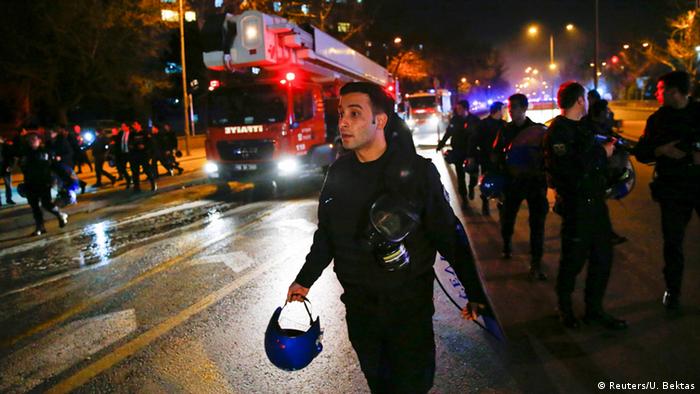 At least 28 people were killed with as many as 61 wounded in the deadly explosion in the Turkish capital, according to an official statement.

The majority of casualties were assumed to be military personnel, however, Deputy Prime Minister Numan Kurtulmus said that the attack did not exclusively target the armed forces but was planned to hit civilians as well.

"This not an attack against our military, but on our dear nation," Kurtulmus said, calling for national unity.

The blast was caused by a vehicle which reportedly exploded during rush hour traffic near a passing van carrying military personnel. The attack occurred in the vicinity of a military dormitory attached to the headquarters of the Turkish Armed Forces in central Ankara at about 6:30 p.m. local time (1631 UTC).

Davutoglu has cancelled his upcoming trip to Brussels where he was set to join the European Union summit to address issues relating to the migration crisis.

Turkish President Recep Tayyip Erdogan has also cancelled a visit to Azerbaijan and threatened to retaliate.

"Our determination to respond in kind to attacks taking place inside and outside our borders is getting stronger with such acts," Erdogan said in a statement.

"It must be known that Turkey will not shy away from using its right to self-defense at any time, any place or any occasion."

The attack sparked international condemnation and words of support for Turkey.

Ned Price, a spokesman for the White House National Security Council, said from Washington that "we stand together with Turkey, a NATO ally, a strong partner and a valued member of the counter-ISIL coalition in the face of this attack," using an alternative acronym for the so-called "Islamic State" (IS) terrorist group.

IS has not, however, claimed responsibility for the attack.

Chancellor Angela Merkel added her voice to the chorus of support, stating that Germany is "with Turkey in the fight against those responsible for such inhumane acts." German Foreign Minister Frank-Walter Steinmeier also sent his condolences.

UN Secretary-General Ban Ki-moon shared his commitment to finding out who was behind the blast, saying through a spokesman that "the perpetrators of this terrorist attack will be swiftly brought to justice."

The explosion occurred roughly 2.5 kilometers (1.5 miles) away from the Turkish parliament in the central district of Cankaya. The ruling AK Party's spokesman Ömer Celik condemned the attack as an act of terrorism.

"The fact that this attack was carried out in one of the busiest areas exemplifies the mean and treacherous nature of terrorism once more," he said. Turkey's Justice Minister Bekir Bozdag and a military spokesperson also referred to the explosion as a terrorist attack. 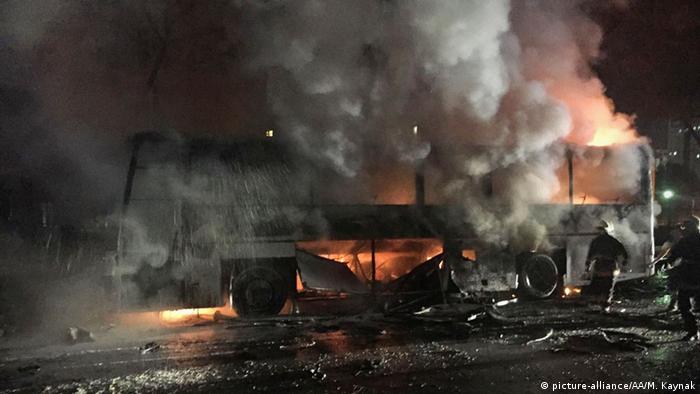 The fire after the explosion continued for at least an hour, sending a major plume of smoke into the sky

A statement from the military said the attack occurred while the military convoy was stationary at a traffic light.

"We strongly condemn this malicious and treacherous attack, wish God's mercy upon the lives of our lost heroes and military colleagues, send our condolences to their families and to the glorious Turkish nation, and wish a speedy recovery to our wounded heroes and colleagues in the armed forces," the statement read.

Turkish police have thrown a security cordon around the area. The Health Ministry said 32 ambulances were dispatched to the scene.

Roughly 30 minutes after initial reports came in about the attack, Turkey's broadcasting regulator RTUK banned any further reporting on the unfolding event outside of official statements.

There was no immediate indication about who had carried out the attack, but the self-declared "Islamic State" group has been blamed for a string of bombings in the country since the middle of last year.

However, after a fragile peace process with Kurdish rebels collapsed last summer Turkish security forces have also been engaging in large-scale operations against Kurdish militants in the southeast, displacing tens of thousands of civilians. The military action has also led to a sharp rise in attacks on soldiers carried out by members of the outlawed Kurdistan Workers' Party (PKK).

The Reuters news agency reported that, according to a Turkish security official, initial signs showed links to the PKK.

Explosions set off by two suicide bombers during a peace protest in Ankara on October 10 killed more than 100 people, the bloodiest attack in the country's modern history. Eleven people were also killed on January 16 when a suicide bomber blew himself up in the tourist heart of Istanbul. All of the victims in that attack were German tourists.