During a parliamentary debate German Defense Minister Thomas de Maiziere has defended his ministry’s controversial decision to halt a costly drone program. However, the drone plan is not the only cut to face criticism. 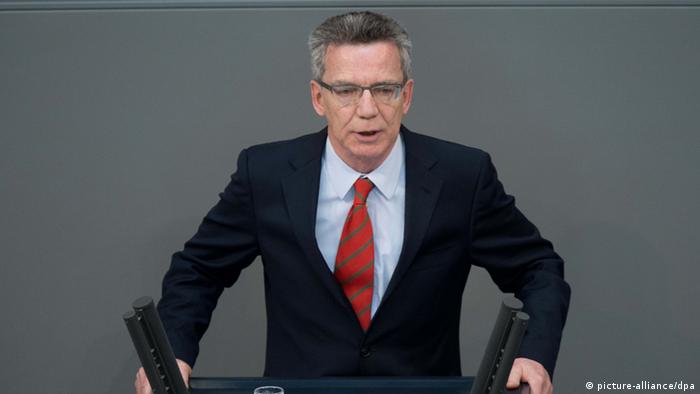 Germany's defense minister made an interim assessment of Bundeswehr reforms during a parliamentary debate on Thursday, defending recent controversial cuts.

"With the reorientation of the Bundeswehr we want to draw a line under the Cold War and its legacy," de Maiziere said.

The aim of the reforms was to increase the capacity for operations abroad and bring the German armed forces into the 21st century. The sweeping reforms included the suspension of conscription which has reduced overall troop size from 250,000 in 2010 to a maximum of 185,000 current soldiers.

By 2017, 32 Bundeswehr locations are set to be closed, with about 90 others drastically reduced. After implementation of the reforms, only 263 sites will be left. The Department of Defense will also be reduced by a third - from 3,000 to 2,000 employees.

Cuts are also set to be made in key defense projects and equipment. The number of Eurofighter jets, Tiger combat helicopters and NH-90 transport helicopters will be drastically cut, in some cases in half.

In his speech, de Maiziere defended the recent halt of the costly Euro Hawk drone project. In explaining his decision, de Maiziere said: "Better an end with horror than a horror without end.”

On Tuesday, Germany's defense ministry abandoned its plans to build the high-altitude, unmanned Euro Hawk reconnaissance drone. Flight clearance issues in European airspace were the key factor in the costly cancellation, however more than half a billion euros had been pumped into the plans already.

The opposition has accused de Maiziere of deceiving the public for years, as the airspace problems had allegedly been known to the government since late 2011. However, more money was channelled into the costly project - including the involvement of US defense contractor Northrop Grumman.

Criticism in the ranks

Following de Maiziere’s address, Rainer Arnold, defense expert and opposition Social Democrat (SPD) member, said the defense minister had not only left the Bundestag in the dark on the drone issue, but also the federal cabinet, which was up until a week ago, "downright deceived," he said.

Arnold also criticized the reforms as a whole. "People know that your reform is a sham," he said.

"You have let the army in this transition process literally bleed," he said, urging the minister to change course.

Even the Bundeswehr Association urged improvements. Before the parliamentary debate, on the ZDF broadcaster morning show, association chief Ulrich Kirsch criticized that troops are assuming too many orders with too few staff.

He said half of the soldiers are currently not able to meet the standards of a 20 month long leave after a four month deployment, leaving them with less recovery time.

Since conscription was suspended the armed forces have also had a low retention rate. In January, the Ministry of Defense reported that only about 30 percent of volunteers join the Bundeswehr after their 6-month-long trial period.

De Maiziere admitted that the restructuring has also been criticized internally. "It demands a lot from the staff. All this takes energy and leads to insecurity." He said the realignment has to be better communicated, but added the reforms will not change course.