What sets Munich apart from other large German cities is the nature on its doorstep. Less than an hour from the town center is some of the best skiing in Europe. 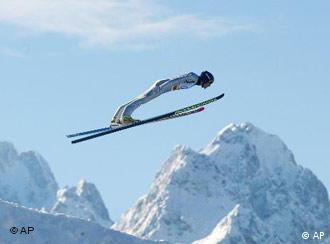 Do not try this at home: top German skier Sven Hannawald at the Zugspitze, near Munich.

A winter visit to Munich shows the best of German city life: chic yet quaint, worldly yet traditional. There's a lot to do in town, from a day at the Alte Pinakothek to an evening at the Hofbrauhaus.

But if you like the great outdoors, and you're looking for a different kind of experience, remember: those snow-capped mountains off in the distance are more than just a pretty backdrop. For the locals -- who tend to fall into the categories "athletic" or "very athletic" -- they are Munich's playground, a Bavarian style skiers paradise.

Visitors, too, can join in the fun. They just have to know where to go.

Heidi Grüger, a German-American who lives in Holzkirchen, 35 miles south of Munich, has been exploring the local slopes for over 20 years, ever since she came from the United States to stay with relatives in the Upper Bavarian resort town of Bad Tolz in the 1980s.

"The big skiing news -- the really high peaks -- are in Austria and Switzerland," Grüger notes. But, she says, "there's some really fun skiing for people who want to stay close to home."

The Südelfeld, Spitzingsee and Brauneck ski resorts lie less than an hour's drive south of Munich. None of these has an international reputation or jet-set clientele. They are smaller, cheaper and more likely to be frequented by locals than the bigger resorts in Germany, Switzerland, France or Austria.

Nonetheless, they're worth a visit, if only to watch the natives at play from the comfort of an après-ski hostelry. 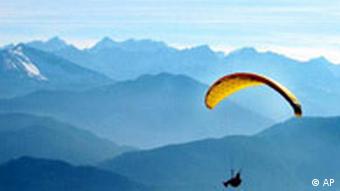 Reachable by car from Munich, not far from the picturesque Schliersee lake, is Südelfeld, a ski area in the town of Bayrischzell. The 22 different lifts and tows connect 25 miles of runs suitable for various abilities. Of the ski areas close to Munich, Südelfeld is the most family-oriented and the best for novices.

"Its not as spooky and steep as the others, and has gentle slopes where you can see from one run to the next," Grüger says.

Nostalgia on the slopes

To the west of Südelfeld, near the Tegernsee lake, is Spitzingsee. Here, the slopes are more challenging than Süderfeld's, and there are fewer runs for beginners.

But what makes the resort uniquely special is the nostalgic, old-world feel it has retained -- mostly by shunning modernization in favor of traditional features. Feel the years drop away by taking the old-style chair lifts, which offer more of a sense of yesteryear than the modern fiberglass gondolas found elsewhere.

To continue the nostalgia trip, head for the Tegernseer Braustüble, the in-spot for après-ski activity at Spitzingsee. It is a cozy, wood-panelled brew pub in the old-Bavarian style, and it's very popular. For a livelier, more modern après-ski experience, the town of Rottach-Egern, on the southern tip of the Tegernsee, offers an array of upscale restaurants and bars. An evening stroll along the lake is a must.

Spitzingsee can be reached by taking a train to the Tegernsee and catching a bus to the resort, or is a 45-minute drive from Munich by car.

Yet further west is the Brauneck resort, 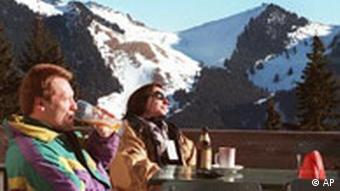 located in the town of Lenggries, near Bad Tolz. Like the other two resorts, Brauneck's season runs roughly from December through Easter. It is the most well-equipped and busiest of the three areas. "It can get a little bit crazy on the weekends," Grüger says.

Why so busy? For one thing, a train runs directly to Lenggries from Munich. Also, it has a lot of variety, with 16 drag lifts, three chair lifts and a new, high-capacity gondola. With a lot of steep runs, the mountain will mostly appeal to practised skiers. One of the runs is four miles long, and another is illuminated for night time descents -- set to music.

Nicest of all at Lenggries, according to Grüger, are the variety of alpine huts scattered across the mountains. "You can always stop in, warm up and have a drink somewhere. It's very typically Bavarian."

If you'd like to experience the mountains without flying down a hill at great speeds on two narrow strips of fiberglass, all three of the resorts also rent equipment and provide trails for cross country skiers, winter hikers and snowshoers.

Into more modern ski styles? The areas cater to snowboarders and carvers as well, with equipment for rent, and they offer classes for all levels.

And every good German ski resort has at least one Rodelbahn, or groomed sledding trail, that will thrill the kids and raise hairs on the neck of even the calmest parent.

The three ski areas mentioned above are certainly charming -- part of their charm being that they are close to Munich and affordable. But if you want an even more spectacular setting and a more international feel (at more international prices), check out the country's highest peak, the Zugspitze.

The Zugspitze is a bit further away from Munich, 65 miles to be exact, in Garmisch-Partenkirchen, but it can be reached relatively easily by train.

The Zugspitze is on a glacier at an altitude of 2,000 - 2,830 meters, so the resort has a longer season, offering skiing November through May. From the top of the Zugspitze, on clear days, there are breath-taking panoramic views of the distant Austrian, Italian and Swiss mountaintops.

At lower altitude and closer to the villages are the classic Wank-Echbauer, Kreuzeck and Alpspitz ski areas. Garmisch-Partenkirchen hosted the 1936 Winter Olympics, and you can visit the old Olympic park and the base of its ski jumps, or take on the Olympia and Kandahar ski runs, now included in the World Cup racing circuit.

After a day of skiing, you may want to relax in one of Garmisch's many pubs -- perhaps the landmark Inn Fraundorfer -- or check out one of the five restaurants at the Post Hotel Partenkirchen.

And if you're willing to turn in late, you can still make it back to Munich by bedtime.

On ski resorts at the Brauneck mountain, in English

Info on Spitzingsee skiing, some in English

Information on skiing the Zugspitze. Some English