A campaign called 'Dark is Beautiful' has gained popularity in India and is bringing an important debate to the forefront: the idea that beauty is equated with fair skin. 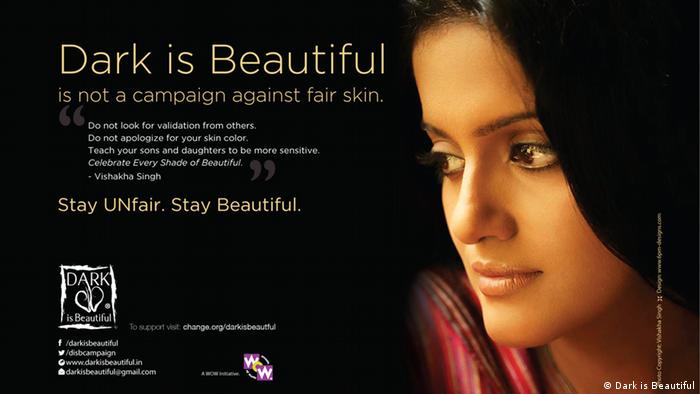 The "Dark is Beautiful" campaign originally started in 2009. Recently, though, it has become quite popular due to a controversial, and some would say prejudice, TV ad for skin lightening cream. The advertisement stars famous Bollywood star Shahrukh Khan who gives a pot of the cream to a darker-skinned man. The viewer is led to believe that the man's dreams will come true, now that he will soon have fair skin.

The people behind the Dark is Beautiful campaign are pushing for this advertisement to be withdrawn. They are also working to change the mindset of society and to create awareness about the deep-rooted prejudice that fair skin is better than dark skin.

"The idea that dark skin is not good looking is something that is deeply rooted in society and we are trying to create awareness about it," Kavitha Emmanuel, director and founder of the organization Women of Worth, which is behind the movement, told DW.

Emmanuel's NGO has been working with students from schools and colleges, training them in soft skills, teaching them to deal with self-esteem issues, peer-pressure and depression. As part of her work, she is constantly confronted with the problems faced by people of dark skin and the discrimination they face in their personal and professional lives.

Nandita Das is an actress who has starred in a number of successful films, such as Fire, Earth, Firaq. Hers is the face of the campaign. As a dark-skinned woman, she knows what discrimination dark-skinned Indians face, especially in Bollywood. "If you are dark then you are cast for roles such as a village women or a slum dweller but an urban affluent character always must be the fair faced person!" 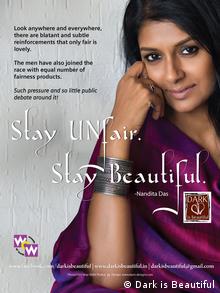 Is Bollywood to blame?

The Indian film industry coupled with the advertising industry continues to show a preference for light-skinned models and actresses. Famous film stars endorse beauty products and the fans follow the message in the hope of being able to imitate their role models.

"The industry has capitalized on it; they have encouraged it to an extent. But in their defense, they say that they have given people what they want or what people thought was beautiful," Emmanuel said.

According to Nielsen India, a market research company based in Mumbai, the fairness cream industry is currently worth 430 million dollars. But the industry has been around for a while. The company Hindustan Lever first launched its Fair & Lovely cream in 1978. The original target group has changed over time. A study conducted by the company showed that the fairness creams are even now popular among men in the southern Indian states of Tamil Nadu and Andhra Pradesh, where skin tones tends to be darker.

The skin bias in the sub continent goes back a long way in the history of the country. As Das points out, "This theory about fair skin being more beautiful and desirable stems from ancient caste hierarchy which overlaps with the class pyramid. For centuries, the upper class/caste has been fair and the lower caste/working class, dark. The former works indoors and has had the best nutrition while the latter toils in the sun and is under privileged in many ways."

The obsession with fair skin goes under Indian society's skin. An overwhelming amount of matrimonial ads in newspapers and online portals read "looking for a suitable match for tall, slim, fair girl from the same religious background" or along those lines.

Emmanuel recounts a story during her interview with DW. "A colleague had a marriage proposal from a doctor based in the UK. This doctor was in a wheelchair and my colleague still accepted the proposal, saying that she would look beyond the physical challenges of her potential partner. But after the doctor's family met my colleague, they rejected her on the grounds of her dark skin." 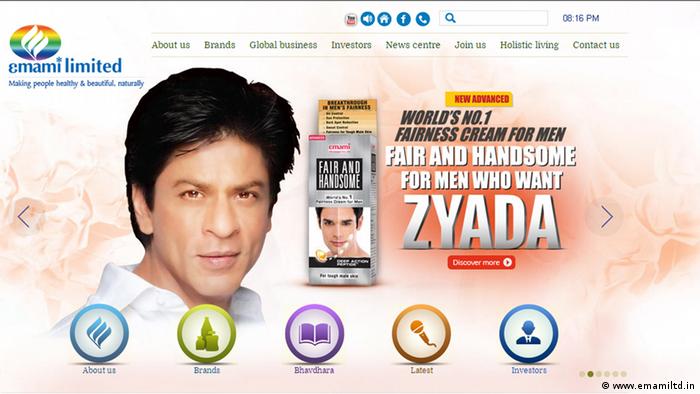 Most Indians opt for an arranged marriage - a traditional setup in India, whereby the parents pick out a suitable spouse for their children. Matches are found by word of mouth or through a matrimonial advertisements. The advertisement's basic elements include physical features, religion, salary and educational qualifications.

Dr. Kanchana Lanzet, an anthropologist and vice president of the German National Committee UN Women, told DW, "I have often heard parents and elders in the family say things like 'unfortunate dark skin girl! she has such fine features if only she was fair!' And this is followed by the million dollar question: who will marry a dark skinned girl, it will be difficult to find a good match for her."

Activists feel that there is an urgent need to change the mindset of the people. They are aware of the fact that this may not happen overnight but the success of the Dark is Beautiful campaign shows that people are coming forward and are willing to discuss and debate this sensitive issue.

Lanzet told DW that the mindset of society will change when it realizes that beauty is only skin deep. Or when "society starts accepting that girls and women are people in their own right, not only with physical attributes, but endowed with talents and the potential to be artists of their own lives - that people are more than the color of their skin."

A group of Indian widows has created waves by taking part in the annual Hindu festival of colors, Holi. A charity taking care of the women says it is a symbolic beginning of the end to an ingrained form of prejudice. (27.03.2013)

Victory turned sour for those calling for the United Kingdom to outlaw Indian-type caste discrimination, when it was revealed the rules won't come into force until 2015. Some British Indians say such a law isn't needed. (03.10.2013)

Thirteen Taliban leaders had been permitted to travel despite sanctions so that they could meet foreign officials abroad. Russia and China had argued this should be allowed to continue, but other countries disagreed.

One year since the Taliban took power in Afghanistan, bomb attacks continue from Islamic State affiliate, ISIS-K. We look at why. Plus, anger in India as the government frees men from life sentences for a gang rape of a woman and the murder of her daughter. And in Delhi, doctors are preparing for a possible surge in monkeypox cases.

The Tibetan community is concerned about its future after the dalai lama passes on. Tibetans who have fled to India wonder if the community will still receive support.