Dallek: 'The country hasn't got over this yet'

50 years after his assassination, historian and biographer Robert Dallek tells DW that John F. Kennedy's enduring status as the most popular president in US history can't simply be based on his political achievements. 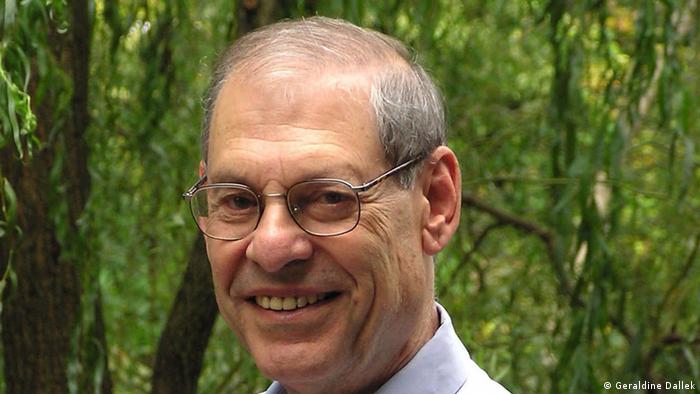 DW: Dallas, Texas. The three shots that rang out on November 22, 1963 changed US history for ever. Any American who experienced the day of John F. Kennedy's assassination still remembers what he or she was doing when the horrible news of the president's death broke. Where did you find out?

Robert Dallek: I was an instructor in the history department of Columbia University. And I had just finished teaching my class and I came out of the university. And as I walked down Broadway there was a small crowd gathered around an automobile listening to the radio and they seemed very agitated. And so I stopped and said: "What's going on? What's happening?" And they said: "The president has been shot." I said: "Oh my goodness." And I rushed home, went up to my apartment, turned on my television and it was announced that he had just died. And then I remember that weekend there was such a sense of sadness that so many people shared. It was a sense that the country had suffered a terrible blow and a terrible loss. And you know, to bring it up to the moment 50 years later: I don't think the country has gotten over this yet.

In your biography "An Unfinished Life," you write that the assassination of President John F. Kennedy was the biggest shock for your country since the attack on the US fleet at Pearl Harbor. What are the reasons that have allowed this president in particular to captivate the imagination of US citizens to such an extent, even to this very day?

One of course is that he was killed. And that he was so young. Only 46 years old. And - as I called my biography - it was an unfinished life and an unfinished presidency. He's frozen in our minds at the age of 46. Nobody could imagine that he would be 96 years old. Frozen in our minds - still young, vital, charming, witty. He's captured on television. He held live televised press conferences. And these can still be seen on the tapes that we have from those days.

In surveys, JFK is still the most popular president in US history. Only Ronald Reagan comes close. Why is that?

Because these are the two men who still inspire the country and give people hope. They remember their rhetoric, their language, their speeches. Kennedy: "Ask not what your country can do for you. Ask what you can do for your country." He promised to put a man on the moon by the end of the decade, and even though he was gone - it happened. His famous peace speech at American University in Washington in June of 1963, urging the country to rethink the way it looked at the Soviet Union. The escape from a nuclear war. He inspires a kind of hope that other presidents since him have not generated.

What did he actually achieve as president? What was his legacy to the American public?

John Kennedy as a domestic president achieved next to nothing. He had four major initiatives: a big tax cut, medical insurance called Medicare for the aged, federal aid to education which was an innovative idea, and a big civil rights bill. None of those passed during his presidency. You also can point to certain failures in foreign policy: The failure of the Bay of Pigs operation, invading Cuba, the exiles that the US and Kennedy sponsored, and Kennedy afterwards says: 'How can I have been so stupid [in listening to the advice of the military]?' His meeting with Khrushchev in Vienna in June of 1961, where Khrushchev beats upon him unmercifully. The Berlin Wall that goes up after that, and he is incapable of bringing it down. In fact he even accepts it as the way to avoid a confrontation over Berlin with the Soviets. Now there are some significant gains: The Cuban Missile Crisis, in which he averts a nuclear war. And the nuclear test ban treaty, in which they end testing of nuclear weapons in the atmosphere, which causes so much radiation and dreadful pollution.

In your recently published book "Camelot's Court" you emphasize just that: That Kennedy was fighting a constant battle against his own generals, who apparently had their finger on the button for years and were ready to lead the world into nuclear war.

His greatest concern, and in some ways his greatest success, was reigning in nuclear weapons. He was convinced that a nuclear war would be the greatest failure and disaster of any presidency. And privately he said to someone: "I'd rather my kids be red than dead." Now he never could have said that in public because than they would have said: "Oh, he's a fellow-traveler. He's ready to give up to the Communists" - so he never could have said that. But what he believed was that everything in his power must be devoted to the idea of avoiding a nuclear conflict. And if he had lived I think we would have seen detente with the Soviet Union sooner than it came about under Richard Nixon in the 1970s. And so, in many ways his greatest achievement was to be mindful of what the dangers of a nuclear war entail. Because many of the military around him were prepared to fight such a conflict.

And many of them weren't very kindly disposed toward their commander-in-chief. In your book it seems as if Kennedy's enemies in the Cold War weren't lying in wait across the Atlantic, but were actually across the Potomac River, which separates the White House from the Pentagon.

Kennedy had fierce tensions with American military chiefs. And he was very concerned about the fact that they were much too casual - in his estimate - about getting into a war and particularly getting into a nuclear war. They resented the fact that this young man who had been a patrol boat commander was replacing a five star general, Dwight Eisenhower, who had presided over the D-Day invasion in 1944 and the victory in World War II. And this Kennedy also seems to be leery about fighting and about using our arsenal of weapons which give us an advantage over our communist adversaries. What one has to understand is: these chiefs, they were part of World War II and the victory in the war they saw as the result of all out use of American power. You bombed Germany, smashing cities, smashing its industrial plan. You dropped atomic bombs on Hiroshima and Nagasaki to bring the Japanese adversary to its knees. Kennedy felt: This time has passed, when you fight an all-out war. You can't do it.

So Kennedy not only defied the generals, he also blocked their power?

He inhibited their power to make decisions. When he came into office local commanders had a certain measure of control over whether you launch a nuclear weapon. And he said: "That's impermissible." And for me it's all summed up in this anecdote that when his national security adviser McGeorge Bundy called up the general at the Pentagon that was in charge of the nuclear war plan and said we want to see this [plan]. And the general said: "I'm sorry, Mr. Bundy, we don't show this to people." And Bundy said to him: "You don't understand: I'm calling for the president of the United States." When Kennedy got a briefing from the joint chiefs in which they had the easels up and they showed him what they thought would happen in case of a nuclear war - that they would kill 170 Million Chinese and Soviets - and as Kennedy walked out of his room, he turned to Dean Rusk, the Secretary of State, and said: "And we call ourselves the Human Race!"

Robert Dallek is an American historian and biographer who currently teaches at Stanford University. He has written extensively on 20th century US political history and is one of John F. Kennedy's most distinguished biographers. His most recent book Camelot's Court was published on October 25.

Barack Obama's speech at the Brandenburg Gate won’t go down in history. But for DW's Jefferson Chase - an American in Berlin - there's much to like about a low-key US president. (20.06.2013)

'Trust and credibility have to be restored'

Barack Obama has been riding the tide of JFK's popularity both in the US and Germany, where the the former US President was once idolized. Endorsements from the Kennedys give Obama's candidacy even greater legitimacy. (29.08.2008)