Dalai Lama Stamp to be Auctioned in Duesseldorf | Germany | News and in-depth reporting from Berlin and beyond | DW | 11.06.2008

Dalai Lama Stamp to be Auctioned in Duesseldorf

An extremely rare Austrian postage stamp showing the face of the Dalai Lama is to be auctioned in the German city of Dusseldorf this week. It is said to be one of only 30 of its kind. 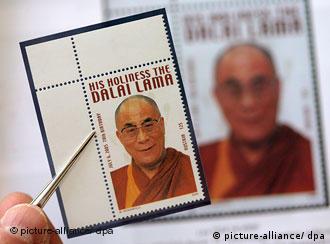 The stamp may not be old, but it is rare

The Austrian post office designed the stamp to mark the 70th birthday of the Tibetan leader in 2005, but the stamp did not go into large-scale production.

"There were only a few test prints made by hand, because a new color was being tested," a spokesman for the Austrian post office told German news agency dpa.

The Austrian post office denied reports that political pressure from China had prevented the stamps from going into production. "Many designs are tested and not pursued," the spokesman said.

Auctioneers Felzmann maintain there are only 30 of the stamps in existence. The stamp had never before been offered at auction, they said. The starting price for Thursday's auction was put at 4,000 euros ($6,200).

In a tale worthy of an Indiana Jones movie, German police were gingerly sorting and listing hundreds of pieces of nearly priceless Mayan, Aztec and Incan art after seizing the mysterious hoard worth $100 million. (01.05.2008)

The German Postcard Craze: Then and Now

An inexpensive souvenir that expresses thoughtfulness: The postcard has been a favorite purchase for many voyagers throughout history. Germany's fascination with the sign of affection started more than a century ago. (21.09.2007)