Dalai Lama Calls for Cultural Autonomy During German Tour | Germany | News and in-depth reporting from Berlin and beyond | DW | 15.05.2008

The Dalai Lama called Thursday, May 15, for more cultural autonomy in his native Tibet during his German tour but stressed that he did not want to see the territory become independent from China. 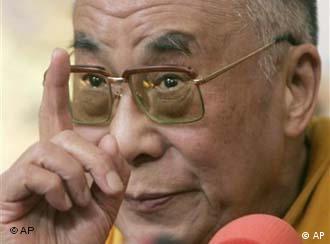 The Tibetan spiritual leader met with regional leaders at the start of his first visit to Germany since the outbreak of unrest in his homeland two months ago.

The Dalai Lama said he was deeply affected by Monday's devastating earthquake that officials fear could have killed 50,000 in the southwestern Chinese province of Sichuan.

The 72-year-old, who was awarded the Nobel Peace Prize in 1989 for his efforts to achieve a non-violent solution to the Tibetan problem, said he would pray for the victims.

Frankfurt was the opening leg of a five-day tour of Germany which will see the Dalai Lama speak on human rights and meet with a member of Chancellor Angela Merkel's cabinet in Berlin.

After a breakfast meeting with Roland Koch, the conservative premier of the state of Hesse, he traveled to Bochum where he conferred with Juergen Ruettgers, prime minister of North Rhine- Westphalia, Germany's most populous state.

Ruettgers said after the talks that the Dalai Lama had briefed him on the meetings between his representatives and the Chinese government held in the aftermath of the freedom demonstrations in March that left an undetermined number of dead.

The talks, in the Chinese city of Shenzhen, had failed to generate the trust that was necessary to resolve the issue, the Dalai Lama said. 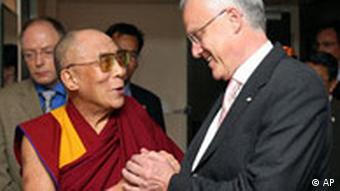 The Dalai Lama spent the first day pressing the flesh

The Dalai Lama also took the opportunity to lash out once more at the "suppression" of anti-Chinese unrest in Tibet.

"The Chinese political authorities' reaction, as before, was suppression. So it is very sad," the Tibetan spiritual leader said after arriving in Germany.

On Wednesday, China protested at the Dalai Lama's planned meetings with Development Minister Heidemarie Wieczorek-Zeul and legislators at the German parliament.

The "Dalai Lama is not a normal monk, but a political exile who carries out anti-Chinese and separatist activities abroad under the guise of religion, human rights and autonomy," a statement released by the Chinese embassy said.

The talks with Wieczorek-Zeul and members of the parliamentary foreign affairs committee are due to take place on May 19 when the Dalai Lama will also deliver a speech at Berlin's Brandenburg Gate.

The run-up to the visit was marked by a domestic row because no one in Merkel's government was prepared to meet him, apparently fearing it could upset China. The meeting with the economic assistance minister was arranged at the last minute. 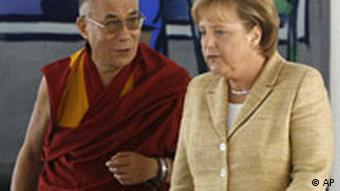 Merkel met with the Dalai Lama during a 2007 visit, but is in Latin America this week

The chancellor is in Latin America and her deputy, Foreign Minister Frank-Walter Steinmeier, turned down an official request for a meeting, saying he does not have time.

The Dalai Lama said he was not put off by this. Some "leading personalities find it uncomfortable to talk to me," he said, "but that is all right."

Merkel met the Dalai Lama at the federal chancellery last September, a move which led to a chill in relations between Berlin and Beijing that ended only in January after intense German diplomatic efforts.

Chinese communist forces invaded Tibet in 1950. Since the Tibetan resistance movement collapsed in 1959, the Dalai Lama has lived in India, where the Tibetan government-in-exile is based.

The Dalai Lama arrived in Germany on Thursday, May 15, at the start of a five-day visit that includes a meeting with a member of Chancellor Angela Merkel's cabinet in Berlin. (15.05.2008)

Dalai Lama to Get Weak Welcome During Germany Visit

The German government has been accused of snubbing the Dalai Lama in an effort to appease China. Contrary to its previous stance, a cabinet minister will meet the Tibetan spiritual leader during his upcoming visit. (14.05.2008)

Criticism is mounting in Germany over what appears to be the reluctance of high-ranking German officials to meet with the Tibetan spiritual leader when he pays a four-day visit to Germany at the end of this week. (11.05.2008)

The Secret of the Dalai Lama's Popularity

The Dalai Lama's Links to Germany