Düsseldorf are set to take a step up to the Bundesliga after a promotion-relegation match against Hertha Berlin. There were chaotic scenes at the end, as fans invaded the pitch before the final whistle. 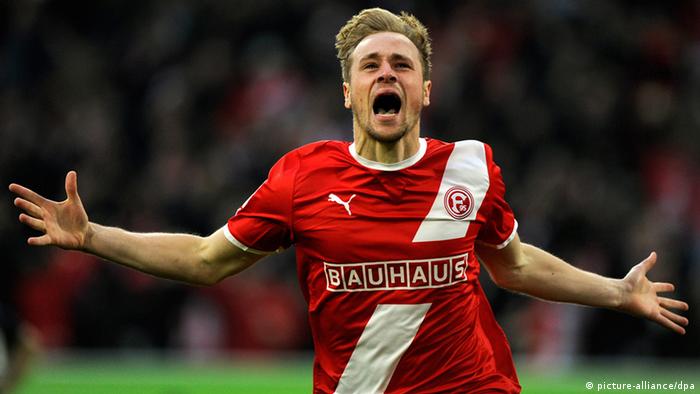 Fortuna Düsseldorf sealed their return to first-class football for the first time since they were relegated from the Bundesliga at the end of the 1996-97 season.

In a 2-2 draw at home in the second leg of their two-game playoff, they relegated Hertha Berlin 4-3 on aggregate.

The match on Tuesday evening pitted the third-best team from the second division (Düsseldorf) against the third-to-last team in the Bundesliga this past season (Berlin). However, it will go down in history for some ugly scenes that forced long delays, particularly near the end of the game, threatening to make referee Wolfgang Stark abandon the match.

The game couldn't have started any better for Düsseldorf - or any worse for Berlin.

Just seconds after kick-off in front of a capacity crowd of 51,000 spectators at Düsseldorf's Esprit Arena, Maximilian Biester took a pass from Ken Islö and went on a solo run towards Hertha’s goal, before unleashing a shot from 25 yards out and beating Thomas Kraft between the sticks. 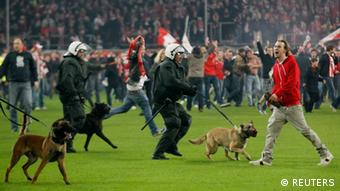 This gave Düsseldorf a 1-0 lead in just the first minute of play and it gave Hertha an even bigger mountain to climb if they were to earn the right to play in the Bundesliga next season. Düsseldorf were now in the driver's seat with a 3-1 advantage on aggregate, due to their 2-1 in last week’s first leg played in the capital.

Hertha get back into it

In the 22nd minute Hertha got back into the tie, with Änis Ben-Hatira escaping his marker, Tobias Levels, and heading the ball home for the equalizer off a free kick. The goal must have been doubly painful for Levels, who had given away the free kick after fouling Ben-Hatira just outside of the box only moments earlier.

Düsseldorf keeper Michael Ratajczak was forced into a great save in the 43rd minute, as he push Ronny's perfectly placed strike from 20 yards out safely around the outside of his left-hand post.

The second half almost began as the first period had when, after two minutes, Beister caused the Berlin defense trouble again - taking a pass and making space for himself in the box. This time, though, he blasted the ball well over the bar.

Berlin’s goal-scorer, Ben-Hatira got himself into a similar position at the opposite end of the pitch six minutes into the second frame, but his effort was blocked by a Düsseldorf defender.

The would-be hero turned villain in the 54th minute with a reckless two-footed challenge with his studs showing. Referee Wolfgang Stark was left with no choice but to produce a second yellow, reducing Berlin to 10 men, with well over half an hour to play.

Four minutes later Hertha paid the price and Düsseldorf took a big step towards the Bundesliga as Ranislav Jonavovic got on the end of a perfectly weighted corner to make it 2-1.

The celebrations of one set of Düsseldorf fans forced the restart to be delayed for several minutes, with small fires and smoke caused by flares thrown onto the pitch.

With 10 minutes left, the plucky Berliners made it interesting again. Ramos got the ball into the box and despite being completely outnumbered by Düsseldorf defenders, managed to play a square ball to Raffael who netted the equalizer.

The second league's top team took Borussia Dortmund down to the wire in the round of 16 German Cup match, but Fortuna Düsseldorf's luck ran out in a penalty shootout. (21.12.2011)

This put the match on a knife's edge, with Fortuna clinging to a one-goal advantage on aggregate. The second Hertha goal also nullified Düsseldorf’s away-goals advantage.

Again though, fans forced a delay - making for a spine-tingling seven minutes of injury time.

Then, seconds after Jovanovic failed to put the game away for Düsseldorf, hundreds of their fans streamed onto the soccer pitch, and the players fled towards the dressing rooms. Referee Stark had a difficult decision to make, as the man on the stadium loudspeaker and the security personnel pleaded with the supporters to leave the pitch.

The restart, to play the final minute of injury time was delayed for a good 20 minutes before Stark was satisfied that it was safe to carry on.

That last minute was uneventful and as soon as the ref blew the final whistle, the pitch invasion resumed, with Düsseldorf supporters "celebrating" by setting off fireworks, digging up pieces of the pitch and ripping away pieces of the goals for souvenirs.

Tuesday night's fan trouble was just the latest in a series of ugly incidents to hit Germany's top flight over the past couple of seasons. It wasn’t immediately clear what sanctions either club might face as a result of their supporters actions.