A memorial plaque was unveiled Sunday in the Czech town of Usti nad Labem for the 50 Germans civilians massacred shortly after the end of World War II.

While many were expelled, the Germans of Usti were not so lucky

Exactly 60 years ago on Sunday, on July 31, 1945 the German men, women and children who lived in the town in the north of what was then Czechoslovakia, were attacked, beaten and thrown into the river.

After the war Czechoslovakia expelled some 2.5 million of its German citizens in retaliation for their support of Hitler's annexation of Czechoslovakia.

Until recently, the Czech government has been unwilling to stage any commemoration of the event, preferring to honor the many Czech nationals who died at the hands of the Nazis during the war. An estimated 75,000 Czechs died in forced labor camps under the Nazis.

The decision to dedicate a plaque to the Germans killed at Usti nad Labem came "like a flash", according to the magazine Respekt which commented: "Until now this event has been edged out of the minds of Czech society by the trauma of its own citizens." 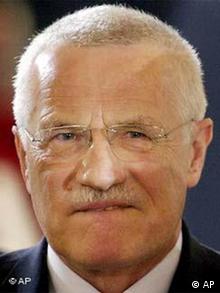 The decision to commemorate the massacre had also led to a spat in the upper echelons of the Czech government with President Vaclav Klaus reprimanding Jiri Paroubek, the prime minister, for wanting to honor the victims of the massacre. Klaus (photo) was quoted as saying that Paroubek must be "out of his mind."

The issue of the Sudeten Germans is a thorny one which still causes tension between the Czech Republic and Germany. Prague has so far refused to repeal the 1945 Benes decrees ordering the expulsion of 2.5 million Germans from Czechoslovakia despite calls for it to do so as a mark of respect and admission of responsibility.

The decrees stripped Germans of their property and expelled them for their support for Hitler's annexation of the Sudetenland area in the run-up to World War II. Some 25,000 to 30,000 people died during the expulsions.

A token of grief and acknowledgement

In spite of the sensitivity of the subject and the opposition to the memorial, the ceremony on Sunday went ahead. Unveiling the bronze plaque, Usti mayor Petr Gandalovic emphasized that the victims had been innocent people killed after the end of the war.

"This plaque should be an expression of our grief towards these unnecessary victims and at the same time it should be an acknowledgement of what happened," he said. 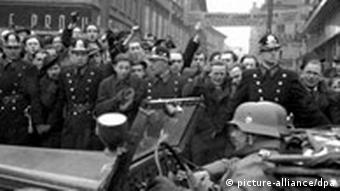 "We can't compare the suffering of German citizens to that of Czechoslovak citizens under the German occupation but it's important to emphasize that those who lost their lives here exactly 60 years ago did so several weeks after the war ended."

He added: "The Czech Republic's accession to the European Union and NATO is a guarantee that the horrors of the last century cannot be repeated." Gandalovic is in favor of further steps to officially remember the Sudeten Germans including a proposed museum in Usti nad Labem.

Walter Erhart, whose father Gustav was killed that day, recalled how he had escaped to Germany shortly before the attack. "We Germans were without rights so I ran away to Germany but my parents were too old to leave. My father was beaten to death and then thrown into the river," Erhart, 86, told AFP.

"What happened was completely wrong. The Germans were people like us Czechs," Jaroslav Musial, chairman of the Usti region of the Czech Freedom Fighters Association, told AFP.

Usti nad Labem becomes the second Czech town after Brno to mark the suffering of the Sudeten Germans. Four years ago, the town issued a formal recognition and expressed regret for the expulsion of 20,000 Germans shortly after the end of the war. Many of those expelled died during the so-called "death march" when the outcasts were forced to return to Germany by foot.

Expulsion Not Just a German Issue

Plans to build a center in Berlin to remember Europeans expelled from their homelands in the 20th century have been shot down by the German government. (Aug. 15, 2003)

Germans and Czechs Turn a New Page on Troubled Past

Chancellor Schröder was in the Czech Republic on Friday to mend strained relations with Prague. The nation's looming EU entry and the delicate issue of a new European constitution topped talks with his Czech counterpart. (Sept. 5, 2003)