Despite all the EU trappings which give the Czech Republic the impression of a fully-integrated member state, the old divisions from the country's early post-communist days still remain engrained in its political fabric. 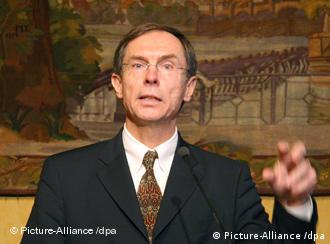 The Czech Republic may have been an EU member for four years and is currently still enjoying the flush of joining the bloc's passport-free Schengen Zone at the end of 2007, but old rivalries, like that fostered by bitter arch-foes and former presidents Vaclav Havel and Vaclav Klaus, hark back to a darker time.

Highlighting the divides in the country is the upcoming presidential election which pits incumbent president Klaus against the Czech-US economist Jan Svejnar.

Klaus is of the old guard -- a conservative representative of the pragmatic yet somewhat provincial Czech patriots. Svejnar is a cosmopolitan idealist, who appeals to the somewhat elitist Havel-style liberals. It is a familiar contest of conflicting views and style which has endured behind the scenes of the Czech Republic's march of progress.

"We all know from the start that Mr. Svejnar is Vaclav Havel's candidate," Klaus recently said of his rival, a former Havel adviser, in a thinly-veiled insult.

Challenger accused of being an outsider 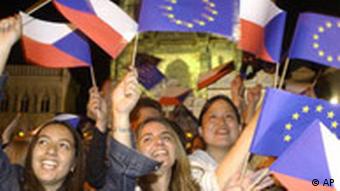 The Czech Republic joined the EU in 2004

Not surprisingly, Klaus' supporters in the Civic Democratic Party (ODS), which he once co-founded and chaired, were among those who attacked Svejnar for being an outsider, whose US wife does not even speak Czech.

Many on the right and left have attacked Svejnar for being an emigrant; a status frowned upon in the post-communist Czech Republic. After communism fell in 1989, Svejnar has split time, if unevenly, between teaching economics at US universities and running an academic institute in Prague.

Havel has defended Svejnar, who has been so surprised by the attacks that he has promised to give up his US citizenship if he was elected. 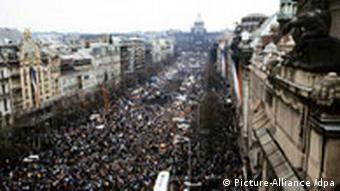 The Velvet Revolution of 1989 brought the Communist government down

"I thought we are almost 20 years after the (1989 Velvet) revolution ... so I expected that actually there would be something attractive about a person who has roots here, lived here, then gathered education and experience abroad," the underdog candidate said.

As a teenager in 1970, Svejnar emigrated from the then Czechoslovakia. He and his younger sister boarded a train to Geneva to join their parents, as their father was representing Prague at the International Labor Organization there.

The young man then settled in the United States, where he is now an economics professor at the University of Michigan.

Since his campaign kicked off in the fall, Svejnar has been the first to openly say what Havel has so far only hinted at.

In desperate need of the communist vote, this communist-era exile spoke out against the hypocrisy, with which politicians have treated the outcasts of the Czech democratic politics -- the Communists.

"Virtually everybody is doing deals with them and sometimes behind closed doors, because there is this unease (about) what this party is," Svejnar said.

The Czech Communists have not shed their name and still have some dogmatic Stalinists in their ranks, but shutting them out has caused the country to have too many weak governments.

Svejnar, however, said that he would not break the taboo and bring the Communists back to the government.

"I think that we are not in that situation yet," he said. "They are not interested in joining the government and I think they have not carried out the transformation yet."

Unlike euroskeptic Klaus and like pro-European Havel, Svejnar supports a strong civil society, measures to curb global warming and the speedy adoption of the euro.

Still he prefers not to be seen as a Havel man.

"He clearly was a terrific moral leader," Svejnar said. "But obviously we are not identical twins."

German Chancellor Angela Merkel hosted Czech leader Mirek Topolanek Sunday as part of a diplomatic drive to remove obstacles to an accord on a new institutional treaty for the EU. (17.06.2007)

Is it time for the Czech Republic to approach its Communists again in the hope of forming a stable government? Please include your full name and country with any reply.