Czech PM to step down over corruption scandal

The Czech prime minister is to resign over a spying scandal involving his top aide. His party is expected to try to cobble together a new government with a new premier. 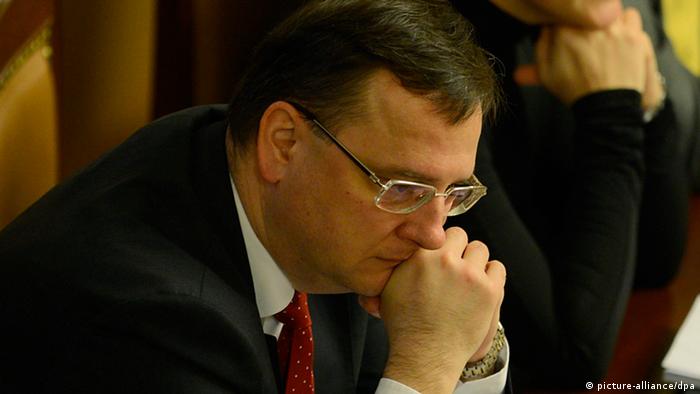 Prime Minister Petr Necas announced his decision to step down at a meeting of his Civic Democrat party late on Sunday.

"I will step down as prime minister tomorrow. I am aware of my political responsibility," Necas told reporters in Prague following the meeting.

The move came just days after public prosecutors charged his chief of staff, Jana Nagyova, with bribing members of parliament and ordering intelligence agents to spy on specific people. One of the alleged targets of the spying is reported to have been the prime minister's wife. There has been much media speculation in the Czech media that Necas and Nagyova may be having an affair. This was also fueled by Necas' recent announcement that he was set to divorce his wife after 25 years of marriage.

Nagyova, who remains in police custody, has only denied some of the allegations against her, while attempting to explain the others away by saying she had acted in good faith.

The prime minister has denied any knowledge about the alleged spying orders.

Seven others have also been indicted on corruption and other charges since a police raided government offices, a villa and a bank last week.

Until Sunday, Necas had resisted calls to resign, despite signs that support for him within the coalition was shaky at best.

"The scandal is so serious that Prime Minister Necas can't simply sit it out," Social Democrat party leader Bohuslav Sobotka had said on Saturday. One other coalition partner had signalled its ongoing support for the premier.

Under the the Czech Republic's constitution, this means that the entire government will be forced to step down along with him.

Necas, whose government is to stay on in a caretaker role for the time being, has said his Civic Democrats would seek to lead a new government under a new prime minister, to lead the country until next year's election.

However, it wasn't immediately clear whether the party's coalition partners or President Milos Zeman would support this. Under the constitution there can be up to three attempts for a new coalition to win a parliamentary vote of confidence. If all three attempts fail or parliament votes to dissolve itself, the next move would be for the president to call a snap election.