Czech center-right parties are beginning talks on forming a coalition government, after their surprising success in the polls this weekend. They have promised severe budget cuts to trim the country's growing deficit. 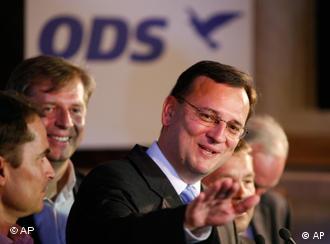 Petr Necas, chairman of the Civic Democratic Party, could well be the next prime minister

What a difference a day makes.

For the past six months, the center-left Social Democrats - led by the abrasive Jiri Paroubek - had been riding high in the opinion polls, heading for what most surveys predicted would be a clear victory: 30 percent, maybe more.

On the actual day, though, it was rather different. And on Sunday, Czechs woke to the prospect of having the strongest government in years after one of the biggest political shake-ups since Czechoslovakia split in 1993.

There were gasps of surprise at the party's Lidovy Dum headquarters on Saturday when Czech television released exit polls showing the Social Democrats tied in first place with the Civic Democrats, both at 20 percent. But surprise turned to despair as the results came in. 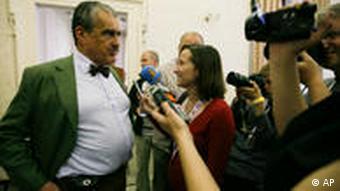 In the end, Paroubek's party scored 22 percent - still the largest party, but a Pyrrhic victory if ever there was one.

Paroubek resigned almost immediately, conceding it was clear the country was heading for a center-right coalition. Plans to create a minority Social Democrat adminstration propped up by the Communist Party lay in tatters. Voters, it appears, had rejected his plans to tax the rich and preserve generous social benefits.

"It seems that people have chosen the direction the country should go in and it is a different direction than the one the Social Democrats were offering,” Paroubek told reporters, his new wife standing by his side.

Czech media reported that waiters at the Lidovy Dum later circulated with trays of champagne bought to celebrate victory. No one would touch them.

Across town, however, the champagne corks were popping at the headquarters of two brand new parliamentary parties: TOP09, which was formed out of disgruntled Civic Democrat and Christian Democrat members and led by the aristocrat Karel Schwarzenberg; and Public Affairs, a rather mysterious centrist party promoting direct democracy and promising to wage war on corruption. 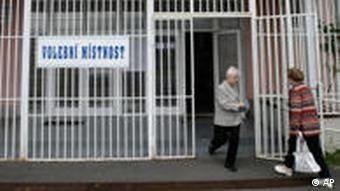 They came out of nowhere and now control a third of the seats in parliament.

"I'm hugely pleased with the Czech people," Schwarzenberg, whose full title is His Serene Highness The Prince of Schwarzenberg, Count of Sulz, Princely Landgrave in Klettgau, and Duke of Krumlov. A former chancellor to ex-president Vaclav Havel, he's popular with urban, right-wing voters, and enjoys something of cult status among the young.

"Czech voters have rejected demogoguery, rejected the extremists, and have given their votes to us, who didn't promise them anything but who gave them a clear vision of the future."

That vision is built on fiscal responsibility – slashing public spending to reduce the Czech Republic's debt and reforming key expenditures such as pensions and healthcare.

A slap for Civic Democrats

Schwarzenberg is already holding talks with the man most likely to become prime minister – Petr Necas, the interim leader of the conservative Civic Democrats.

They came second in the poll but unlike the Social Democrats, they have the potential to put together a majority center-right coalition and will lead efforts to form a new government, together with the centrist Public Affairs. 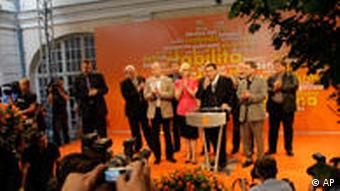 But even though the Civic Democrats - founded in 1991 by Vaclav Klaus, now president - will play a leading role in the new government, it was not a great election for the party. They did particularly poorly in Prague - a bastion of Civic Democrat support since the early 1990s.

It used to be said that even Vaclav Klaus' tennis racquet could win a seat in Prague. One commentator said that phrase should now be amended: even Karel Schwarzenberg's pipe could stand for office and win in the capital, he said.

"There's not much to celebrate," Civic Democrat deputy leader David Vodrazka told Lidove Noviny newspaper. "The voters – especially in Prague – didn't just wave a warning finger at us. They slapped us round the back of the head."

Indeed it was something of an earthquake for Czech politics, as voters punished the two big parties - and several smaller ones as well.

Paroubek was not the only party leader to resign. Ondrej Liska, head of the Greens, immediately announced his resignation after his party lost all its seats. Cyril Svoboda, leader of the Christian Democrats, followed suit after his party was unceremoniously kicked out of parliament.

But in many ways his was the real success story of the evening – he had developed a personal animosity towards Social Democrat leader Paroubek. In the end Zeman's party won 4.3 percent – almost all of them Social Democrat voters, helping to deprive Paroubek of the victory he so craved.

Results from the Czech Republic's general election on Saturday suggest that center-right parties together may form the next coalition government. (27.05.2010)

A Czech court has banned the country's far-right Workers' Party, which plans to appeal. The judge ruled the party's program to be xenophobic, racist, chauvinist, homophobic and anti-Semitic. (20.02.2010)