Powerful Cyclone Fani has left a trail of destruction after thrashing India's east coast. In Bangladesh, more than 2 million people have been evacuated as the storm moves northeast.

A deadly cyclone ripped through India’s east coast on Friday, unleashing torrential rains and gale-force winds as hundreds of thousands of people fled its destructive path.

Cyclone Fani made landfall near the eastern Indian holy city of Puri at 8 a.m. local time (0230 UTC) as an "extremely severe" cyclonic storm packing wind gusts of up to 205 kilometers (127 miles) per hour, the India Meteorological Department said.

It projected "total destruction" of thatched houses, uprooting of power and communication poles, damage to roads and the loss of crops and orchards. Local airports, train lines and roads and schools were closed.

In Odisha, around 1.2 million people were evacuated from low-lying areas before the storm struck and were staying in nearly 4,000 shelters. Hundreds of thousands were moved out of the storm’s pathway in West Bengal.

Local media reported five deaths, but officials only confirmed one.

The National Disaster Response Force has sent 54 relief teams to flood-prone areas along the coast and stocked up food, water and medicine. Meanwhile, the Indian navy, air force, army and coast guard were on standby for relief operations.

Fani, the strongest storm to slam into India's east coast since a 1999 cyclone in Odisha killed almost 10,000 people, weakened to a “severe cyclonic storm" with winds up to 110 kilometers per hour as it moved inland, the Meteorological Department said late Friday. 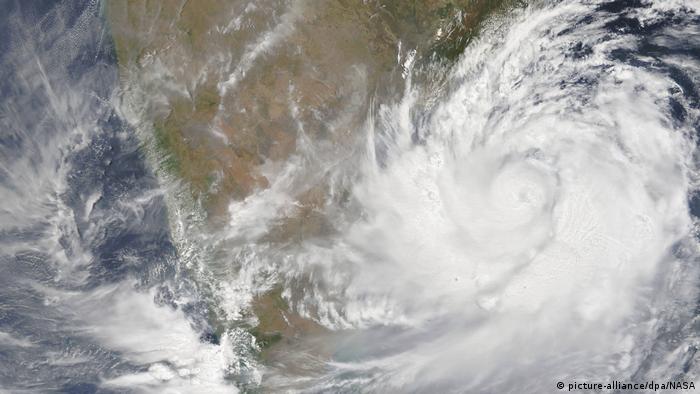 The cyclone is projected to weaken as it moves northeast into West Bengal and Bangladesh on Friday night. By Saturday, it is expected to be a depression over Bangladesh.

In Bangladesh, authorities said up to 2.5 million people would be evacuated by Friday evening. The densely populated, low-lying nation of 165 million is prone to floods and landslides.

Cyclone Fani has made landfall in northeastern India and is expected to unleash extensive destruction. Nearly a million people were evacuated ahead of the storm. (03.05.2019)

Cyclone Fani, one of the biggest storms to come off the Indian Ocean in recent years, has struck the east coast of India in the state of Odisha. The winds and fierce rains have already caused huge damage to the region. (03.05.2019)