Curtain comes down on Frank Castorf′s era at the Volksbühne | Culture| Arts, music and lifestyle reporting from Germany | DW | 29.06.2017

Unconventional and provocative: As the artistic director of Berlin's Volksbühne - the "People's Theater" - Frank Castor wrote theater history. Here's why his productions were so unusual. 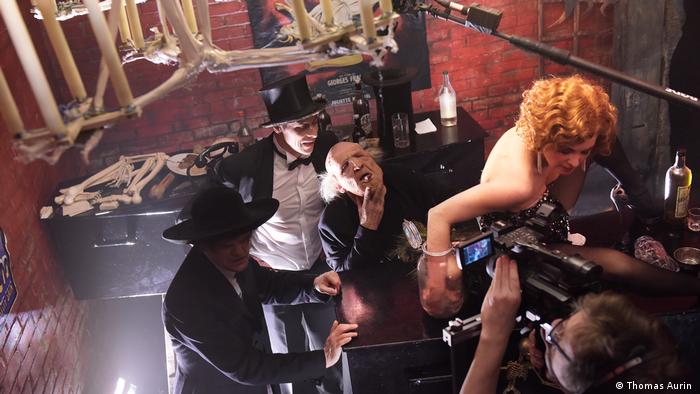 Castorf's farewell production at the Volksbühne: a seven-hour "Faust"

Frank Castorf's final play at the Volksbühne that premiered in March was Faustian: Martin Wuttke as Doctor Faustus, Marc Hosemann as Mephisto and Sophie Rois as a witch, all scream and improvise their parts. Live cameras offer close-ups of hidden parts of the stage.

Castorf sets his "Faust" in France during the Algerian War. He provocatively loads the play with quotes from Frantz Fanon's liberation theory and Paul Celan's "Death Fugue." Goethe's tragedy and parable on humanity is turned into a seven-hour tour de force. And once again the master of the theater on Rosa-Luxemburg Square uses all the ingredients that make his theater, his witches' brew, so unique. It is without a doubt one of Castorf's strongest stagings ever.

Son of an ironmonger

The son of an ironmonger born in East Berlin's district of Prenzlauer Berg, Castorf started directing theater in former East German cities - in Aklam, Gera, former Karl-Marx-Stadt (today Chemnitz), and Halle - before landing in East Berlin at the Deutsches Theater, and the Volksbühne just before the fall of the Berlin Wall.

Invitations to the theater festival Berlin Theatertreffen followed. From 1999 to 2003, the award-winning theater director Castorf was almost always part of the program, returning in 2014 after a creatively weaker period. "After 10, 15 years, I felt weary. I didn't feel like continuing," Castorf admitted. 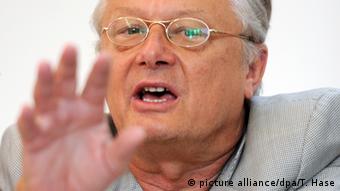 'Either famous or dead' within three years

Now aged 65, the theater director always gave the impression he was unapproachable and publicity-shy. Wearing jeans, a T-shirt, simple glasses, and with his thinning hair, he'd always greet the applause at premieres while chewing gum.

His productions were always peppered with self-references and inside jokes for the initiated. They became cult, winning many fans after he became the artistic director of the Volksbühne in 1992. He then aimed to be "either famous or dead" within three years.

His direction of the theater was triumphal, changing how theater was made in the entire German-speaking world.

His beginning was fiery, with "King Lear" and "Rheinische Rebellen" (Rhenish Rebels). Castorf had already offered a brash adaptation of Schiller's "The Robbers" two years earlier. That's when stage designer Bert Neumann created a metal sculpture called the "Räuberrad" (Robber's Wheel) installed in the square in front of the theater - and which has become a symbol for the robber's aesthetics of the Volksbühne and of its resistance "against mainstream conformity," said Castorf. The icon is printed to this day on T-shirts and matchboxes. 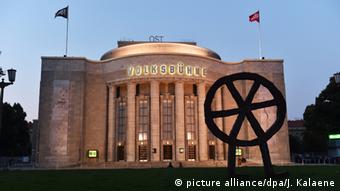 The Volksbühne theater in Berlin

Castorf's approach was based on the revolutionary tradition of the Volksbühne, which opened in 1914. Literally the "People's Stage," the theater was financed by the workers with a program for the workers.

The longtime director paid tribute to eminent theater directors such as Max Reinhardt, Erwin Piscator and Benno Besson, who had already combined styles, adapted novels and used film in their stagings at the Volksbühne.

Castorf perfected the use of video on stage; he made classic works collide with harsh scenes from reality. Traditionalists saw him as a "theater smasher," while young people would go the Volksbühne as they would to a party. At the beginning, Castorf was underground, then he became pop. The actors he worked with, such as Henry Hübchen, Kathrin Angerer, Milan Peschel, Silvia Rieger, Martin Wuttke and Sophie Rois also gained cult status.

Drinking and smoking on stage

In his early years as director of the Volksbühne, Frank Castorf caused a furor with plays such "Pension Schöller/Die Schlacht" and "Die Nibelungen - Born Bad."

"Like Heiner Müller, we think that one can be operative with art - intervene, change, disturb and unsettle the landscape of the German soul through the pleasure of contradiction," the provocative theater director once explained.

On stage, actors would smoke, drink and cook. Buckets of potato salad were distributed. 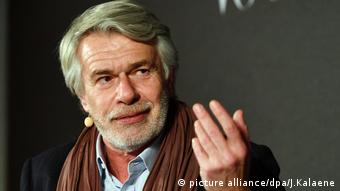 Opinions on the future director of the theater, Chris Dercon, are divided

The anarchic furor was complemented by guest productions by other directors, such as Christoph Marthaler's melancholic-toned farewell to the GDR, "Murx den Europäer" (Murx the Europeans), which established new standards.

Castorf saw the Volksbühne as the last bastion of defense against the pervading materialism of Western consumer society.

Cultural battle for its legacy

Meanwhile, the theater's contributors and audience are rebelling against Castorf's designated successor, former Tate Modern director Chris Dercon. Some fear the "death of the political ensemble theater"; others believe it will become an "event booth submitted to the global cultural jet-set."

A cultural battle surrounding the future of the Volksbühne is being fought. The huge luminous letters "OST" (East) have already been removed from the theater's roof. Castorf himself didn't get involved in the controversy. He will be working as a guest director at the Berliner Ensemble. The Castorf era at the Volksbühne is over.

German theater director Frank Castorf is known for scandalous productions. Now he's being sued by Bertolt Brecht's heirs for not sticking to the original script. Is theater about trying new things or staying authentic? (04.02.2015)

The premiere of Johann Kresnik's adaption of the graphic novel "The 120 Days of Sodom" for stage at Berlin's Volksbühne has courted much controversy, with its graphic portrayals of pedophilia, incest and brutal torture. (28.05.2015)