In Poland, more wiretapped conversations with government members surfaced at the weekend. Prime Minister Donald Tusk, supported by party members, is not ruling out fresh elections. 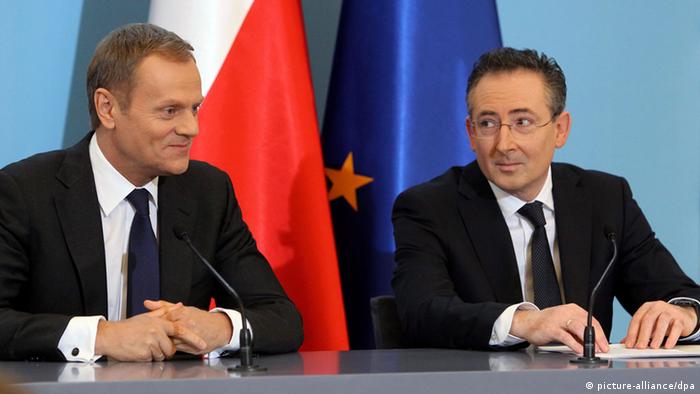 It all began with the weekly news magazine Wprost. In its June 16 edition, it revealed several illegally taped conversations of politicians and business people that showed the government in a less than favorable light.

They center around a conversation Interior Minister Bartlomiej Sienkiewicz had with central bank chief Marek Belka in the spring of 2013. Belka demanded that the then-finance minister be fired and offered his support in the upcoming budget consolidation round. A few months later, Finance Minister Jacek Rostowski left his post.

Since then, new revelations of this kind just keep on coming, putting pressure on Prime Minister Donald Tusk. The most recent example is a conversation between Foreign Minister Radoslaw Sikorski with ex-Finance Minister Rostowski at the beginning of this year. 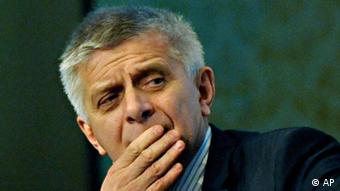 He apparently criticizedPoland's relations with the US in the most undiplomatic way, swearing all the way through and calling Poland's alliance with the US "worthless" as it gave a false sense of security. Sikorski, meanwhile, calls the revelations an "organized attack of a criminal group on the government."

As more and more conversations are being leaked, Poles are asking themselves who tapped these conversations and why are they being published now? Some suspect Russia could be behind it.

Even seasoned commentators think that because of the crisis in Ukraine, the overhaul of the EU's energy policy and the rejigging of the EU Commission it's possible that Moscow is trying to destabilize Poland.

There were reports at the weekend of business connections of the restaurants, where the conversations were recorded, and Russian business people whose contacts apparently stretch to intelligence circles. Prosecutors are, apparently, following that lead, too.

The illegally recorded conversations are supposed to have taken place in three different restaurants in Warsaw last year. Politicians, business people and other officials are said to have talked about sensitive affairs, both of the state and private.

According to the latest media reports, a group of journalists, restaurant employees and business people are suspected of being behind the wiretapping operation. Their motives are unclear.

When the newsroom of Wrpost magazine was being searched, however, prosecutors, police officers and intelligence officers crossed a line by trying to forcefully remove the laptop of editor-in-chief Sylwester Latkowski. When that did not work, they abandoned the operation. It prompted outrage among the Polish public, who saw this as an offense against the freedom of the press. 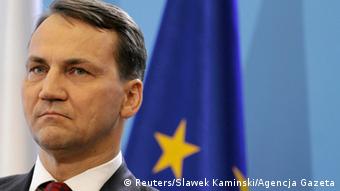 Sikorski's alleged comments on the US have ruffled feathers

There has also been criticism of the magazine that published the conversations, Wprost. Latkowski justified the publication by saying "we don't see our role in protecting those in power, we aim to uncover the state's shortcomings and mistakes."

But Latkowski himself is one of Poland's most dazzling media personalities, who came to journalism in rather roundabout way. In the 1990s, he tried his luck as a car salesman, selling cars from Germany on the Polish market.

In 1994, he was one of two main suspects in a murder trial in the western Polish town of Szczecin. He fled to Berlin, where he is said to have been involved in dubious loan schemes. After the murder investigation had been abandoned, he turned himself in and went to jail for fraud and extortionate robbery. He was released in 2000, when he started his career as a documentary maker and author.

Fresh elections on the cards

Wprost is one of the leading magazines in Poland, known for its controversial title stories. For years, the publication has honored famous personalities. Its "Person of the year" award has been handed out to people like Lech Walesa, Viktor Yushchenko and Bronislaw Komorowski. When Latkowski became editor-in-chief, Angela Merkel received the award, which she has never acknowledged.

Since the wiretapping affair has not just been picked up in the domestic and European press, but also in the US media, it is putting Tusk under enormous pressure. Many fear it will inflict lasting and irreparable damage on the government.

While in the early days of the affair, it was mainly the opposition calling for new elections, the ruling party has now come round to the idea. Tusk is not ruling out fresh elections, but he has also emphasized his priorities. "No consequences for those that were tapped, but the identification of the group" that led the operation.

Tusk called the affair "the first attempt since 1989 to topple the government using illegal methods."