It all started as a musical in 1973. It was then adapted into a film two years later that became a cult phenomenon like no other. Now, Fox has produced a TV remake. Are viewers ready to do the "Time Warp" again?

There's a wedding on the screen: Moviegoers throw rice in the theater.

In the film, a blonde woman gets out of her car. She holds a newspaper over her head to protect herself from the rain. Meanwhile, in the cinema, water guns spray water all over while others hold newspapers over their heads too.

The woman then starts singing. When she sings "There's a light," hundreds of cigarette lighters are held lit up in the audience.

The woman and her boyfriend then enter a castle where a party is taking place. On screen, people are dancing the "Time Warp": moviegoers join in.

When Dr. Frank N. Furter's creature Rocky is unwrapped from its bandages, moviegoers throw around toilet paper while singing the film's songs. 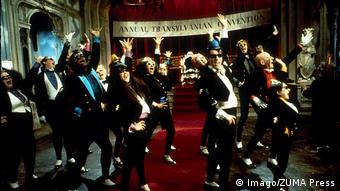 A wild party on the screen - and the audience joins in

After the movie, the theaters always look like a mess. Still, the next presentation of "The Rocky Horror Picture Show" will soon follow.

In the early 1980s, people were crazy about "The Rocky Horror Picture Show." They loved the characters, the music and the happenings in the theaters. They dressed up as transvestite Frank N. Furter, or as the housemaids Magenta and Columbia.

The film was shown for years in repertory cinemas. It still runs in a movie theater in Munich, which therefore found its way into the Guinness book of records.

The cult musical "Rocky Horror Show" was performed for the first time in 1973 by actor Richard O'Brien. He got the idea while he was bored waiting for a job in his London apartment. He wanted to create a parody of trashy American  B-movies of the 1950s such as those directed by Jack Arnold, the master of monster, horror and sci-fi classics such as "Tarantula" and "It Came From Outer Space." 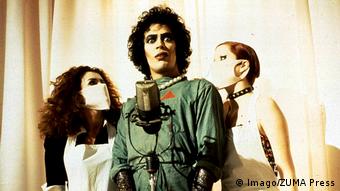 A wild party on the screen - and the audience joins in

The "Rocky Horror Show" celebrated its premiere on the tiny stage of the London Royal Court Theater on June 16, 1973. Although the budget of the production was very tight, both audiences and critics loved it.

Originally planned to run for five weeks, it was actually shown for seven years without interruption. Fans started to turn the theater show into a happening. And it was so much fun. The musical was also presented by other theaters, including one in New York. It kept attracting more and more people in costumes, who'd throw around rice and other props.

A year after the premiere of the musical, O'Brien got together with film director Jim Sharman to write the screenplay for the film "The Rocky Horror Picture Show." It premiered on August 14, 1975, in London. In 1977, the film started to run in Germany.

At first, it wasn't particularly successful. But soon, some cinemas got the idea to market the film as a "Midnight Movie." That attracted a lot of weirdos who loved to party - and the rest is film history.

The musical stage show has remained in continuous production to this day. Fans still participate by throwing around rice and toilet paper.

And now, there is a remake of the cult film produced by the US television broadcaster Fox. It was directed by choreographer Kenny Ortega, who also choreographed the dance scenes in "Dirty Dancing," as well as choreographies for Madonna and Michael Jackson and the Michael Jackson documentary "This is it" (2009). Ortega is now expected to provide a modern outfit to the flashy travesty show. 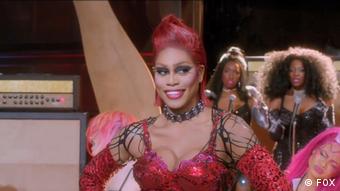 Laverne Cox is the perfect choice for Frank N. Furter

A real transsexual is starring in the remake. Actress Laverne Cox, born as a man, known as the jail hairdresser Sophia Burset in the TV series "Orange is the New Black," now depicts the megalomaniac Frank N. Furter.

R&B singer Christina Milan is the housemaid Magenta. Adam Lambert, who sings in the rock band Queen since 2011, plays the unlucky fellow Eddie who is murdered and ends up as part of a dinner.

The original Frank N. Furter, actor Tim Curry, is also part of the remake, this time in the role of the storyteller.

The soundtrack has been completely reworked. It all sounds pretty good. But will the remake really be able to repeat the huge success of the 1970s original? Will the current young party generation be as enthusiastic about the movie as their parents?

For the time being, it's just a two-hour television film. It still remains to be seen if it'll find its way into theaters.

"The Rocky Horror Picture Show: Let's Do the Time Warp Again" will air in the US on Thursday, October 20.

A drag queen's quest to save Dresden

Transvestite DJ Lara Liqueur has launched a campaign to become mayor of Dresden. She plans to mend the political rifts plaguing her home town with free schnapps and free advice: lighten up. David Crossland reports. (16.03.2015)

As the reboot of "Ghostbusters" hits cinemas in the UK on July 11, here's a nostalgic look back at some unforgettable movies of the 80s and their soundtracks. Do you know them all? (11.07.2016)