CSSD calls on Sobotka to quit after disappointing Czech election

The Czech Social Democrats have called on their leader to resign after disappointing election results. Seven parties won seats Friday and Saturday. 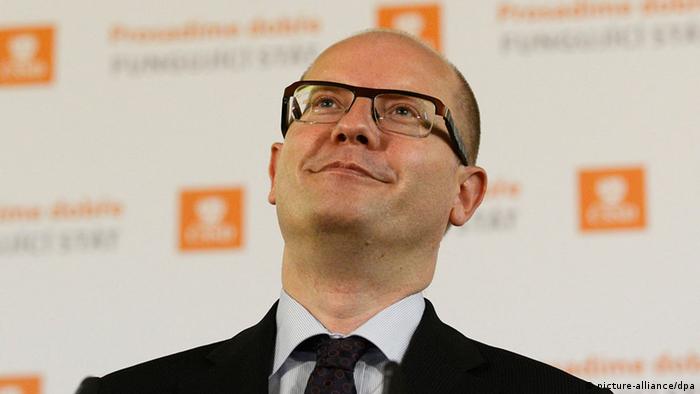 A nonbinding vote by the CSSD's leadership went 20 to 13 to call on party chairman Bohuslav Sobotka, thought Sunday morning to be the Czech Republic's likely next prime minister, to quit after the party won only 20.5 percent of the vote. CSSD deputy chairman Michal Hasek, an ally of center-left President Milos Zeman, has led the coup effort. Sobotka has refused to step down as leader, insisting his party "took the wrong decision."

"I won't resign on the basis of today's call approved by a majority in the CSSD leadership," Sobotka told reporters Sunday.

Sobotka's CSSD won 50 seats in the 200-member lower house versus 47 seats for ANO (whose names stands for Action for Alienated Citizens, but is also Czech for yes), the party led by the Slovak-born billionaire Andrej Babis. The Christian Democrats (KDS) won 14 seats.

Hasek and his CSSD allies secretly met with Zeman on Saturday evening without letting Sobotka know, Czech media reported. The deputy chairman will now lead efforts to form any coalition.

At street protests in Czech cities, neo-Nazis shout hate slogans to spread fear amongst the Roma population. They seem prepared to use violence. But Roma in the town of Duchcov have responded with peaceful measures. (01.09.2013)

"Voters do not need to worry for a second about the mandate they gave the Social Democrats," Hasek said. "Our promises and commitments remain in place."

In his plans to form a coalition, former Finance Minister Sobotka had said he would talk to all parties, but added that ANO and a traditional small centrist faction, the KDS, seemed logical partners. Sobotka had hoped to assemble a coalition that would control 111 seats. The turmoil in the Social Democrats may have already hurt prospects for forming a coalition.

"I am shocked by what is happening in the Social Democrats," the news agency CTK quoted Babis as saying. "This party, the election winner, is destabilizing the political situation."

The CSSD's central executive committee, which nominated Sobotka as party candidate for prime minister in August, also holds the power to sack him. However, he vowed to fight on, saying his rivals, led by deputy chairman Hasek, would fall under the influence of Zeman, Sobotka's longtime rival and a former CSSD prime minister.

"I will not resign because I want to keep defending values I believe in within the [party]," Sobotka said. "Among them is an independent Social Democratic party."

The Social Democrats won the most votes in the elections held Friday and Saturday, but finished only 1.8 percentage points ahead of Babis' breakout populist ANO party. In the vote, Sobotka also lost his place on the party's negotiating team for talks with potential coalition partners.

The CSSD had sought a strong majority after the elections to form a minority government backed by the Communist Party of Bohemia and Moravia, but neither faction scored enough votes to succeed. Analysts say any future coalition must have the support of Babis's populists to be viable.