Senator Ted Cruz named businesswoman Carly Fiorina as his pick for vice president after suffering fresh losses against Donald Trump in the race for presidential nomination. Trump described the move as a "waste of time." 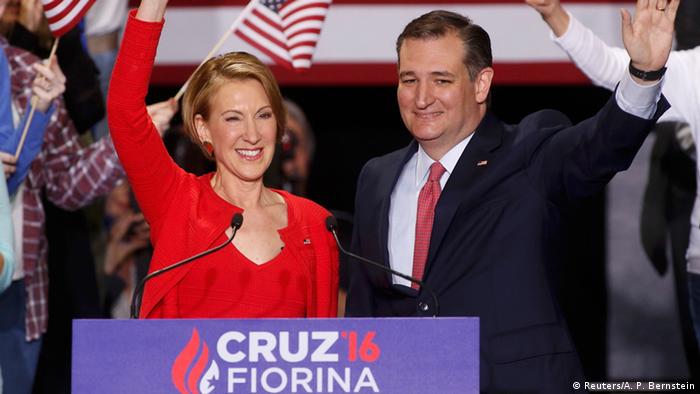 The Texas senator said he picked Fiorina after much "consideration and prayer," while praising his new running mate at an Indiana rally on Wednesday.

"She is careful. She is measured. She is serious," Cruz said. "She doesn't get rattled."

Usually, US presidential candidates announce their prospective vice presidents only after clinching the party nomination. However, Cruz has been struggling to keep pace with front-runner Donald Trump, especially after losing five states to Trump on Tuesday.

Many observers believe his announcement is an attempt to jolt his campaign.

In her acceptance speech, Fiorina said she was "very proud and very humbled" by Cruz's offer.

"This is a fight for the soul of our party and the future of our nation," she said.

"I know two girls that I just adore, I'm so happy I can see them more. 'Cause we travel on the bus all day; we get to play," she intoned, prompting bewilderment on social media.

Fiorina is an outspoken critic of both Trump and the Democratic front-runner Hillary Clinton, and one of Cruz's most vocal allies. Although she has never held public office, Fiorina made a reputation as a senior executive at AT&T and one-time CEO of Hewlett-Packard.

"Carly isn't intimated by bullies," Cruz said at the rally. "Over and over again, Carly has shattered glass ceilings."

Fiorina's business career, however, is not without controversy: she was forced to resing amid weak earnings in 2005, and some 30,000 people had been fired during her six-year tenure.

The 61-year-old Fiorina had also sought the Republican nomination alongside Cruz and Trump, but dropped out in February after disappointing results in New Hampsihre.

Republican front-runner Donald Trump slammed Cruz's announcement as a "pure waste of time" and "a desperate attempt to save a failing campaign."

"Cruz has no path to victory. He is only trying to stay relevant," the New York billionaire and former reality TV star said.

Trump supporters echoed his remarks on social media, describing the Cruz-Fiorina duo as a losing proposition.

Many US Democrats also criticized the move, jabbing at Cruz's immigration policy and Fiorina's record as CEO.

"The best way to describe that ticket is mean and meaner," said Senator Barbara Boxer from California, who beat Fiorina in the 2010 elections. "He wants to throw people out of the country, and she threw thousands of jobs out of the country. Perfect match."

Other infuential voices, such as neoconservative commentator William Kristol, greeted the decision.

Cruz faces a tough struggle to secure the nomination, as Donald Trump already has 77 percent of the delegates he needs to become the Republican candidate. The path forward for Cruz would involve persuading a sufficient number of delegates to vote for him in the event of a contested Republican convention in July.