The Croatian Parliament on Saturday backed the new government of Prime Minister Ivo Sanader, who said that further European integration and economic development would be top priorities. 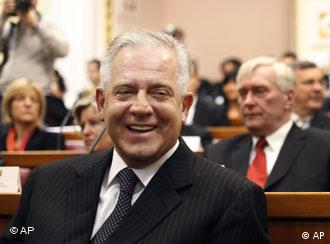 Sanader said that Croatia would do everything it could regarding reforms and negotiations to speed up its efforts to join the European Union by 2010, adding that he expects Croatia to join NATO as well in April.

"We are entering a period during which Croatia, led by this government, will achieve its main strategic goals," Sanader told deputies.

He also said that the country's internal priority would be economic growth and stability, adding that an emphasis would be put on tourism and agriculture.

Sanader began his second consecutive term thanks to the victory of his Croatian Democratic Union (HDZ) in November elections. His new cabinet, passed Saturday evening with 82 votes in favor and 62 votes against, has a four-year term.

President Stjepan Mesic designated Sanader two weeks ago to form a new cabinet after the conservative HDZ received 66 of the 153 parliamentary seats.

Though the opposition Social Democratic Party (SDP), which claimed 56 seats, tried to form a majority coalition to challenge HDZ, Sanader beat them to the punch, forming a coalition with four other parties.

The deal with the SDSS gives an ethnic minority a top government post for the first time since Croatia gained independence in the Yugoslavia war of the early 1990s.

Serb official Slobodan Uzelac of the SDSS was designated a deputy premier. Four deputies were appointed in total to satisfy the demands of the large coalition.

When Slovenia takes over the European Union presidency on Jan. 1, 2008, it will focus on issues close to home: Kosovo's independence and the efforts of neighboring Balkan countries to join the bloc. (24.12.2007)

Croatia took another step towards EU membership Thursday when ambassadors from the existing 27 member states agreed in Brussels to open two new membership negotiation chapters with the Balkan nation. (11.10.2007)

Balkan States Have High Hopes of Joining the European Club

Southeastern Europeans expect more political stability and economic benefits from joining the EU but are also wary of inflation and their job prospects, an opinion poll has shown. (14.03.2006)

What can Croatia offer the EU and NATO? Please include your full name and country with any reply.