The minority Muslim Tatar community in Crimea have taken the first steps toward seeking autonomy. An assembly vote follows Crimea's annexation by Russia. 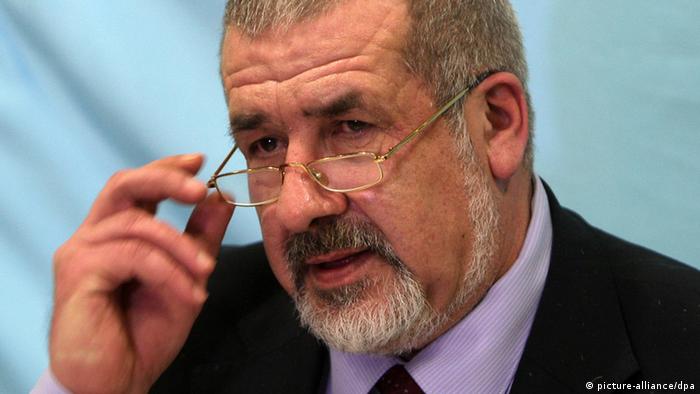 An assembly of 200 Tatar delegates on Saturday, held in the Crimean Tatars' historic capital of Bakhchisaray, voted in favor of the proposal put to them by assembly leader Refat Chubarov (pictured above).

"I ask you to approve ... the start of political and legal procedures aimed at creating ethnic and territorial autonomy of the Crimean Tatars of their historic territory of Crimea," Chubarov said. "In the life of every nation there comes a time when it must make decisions that will determine its future."

The Crimean Tatars make up about 12 percent of the peninsula's population. There was a widescale boycott by the Tatar community of the March 16 vote to split Crimea from Ukraine and become part of Russia.

Two senior Russian Muslim officials with close ties to the Kremlin attended the assembly and tried to persuade delegates to side with Moscow. One of them, Grand Mufti Ravil Gainutdin, also an ethnic Tatar said: "I pray to Allah that you make the decisions that will be helpful to the Crimean Tatar people."

Tatars are historically wary of Russia. In 1944, Soviet leader Josef Stalin ordered them to be deported en masse from their homeland to Central Asia. Half reportedly died en route. They were not allowed to return to Crimea until the late 1980s.

Russia and US diplomacy

Separately, Russia said on Saturday it had "no intention" of invading eastern Ukraine. Speaking on Russian television, Foreign Minister Sergei Lavrov said,"We have absolutely no intention of - or interest in - crossing Ukraine's borders."

US Secretary of State John Kerry is reportedly due to meet Lavrov in Europe on Sunday to discuss the situation in Ukraine.