Crimean officials have unveiled a statue of an armed soldier in celebration of Russian troops that took control of the peninsula from Ukraine. Governor Sergey Aksyonov pledged to keep developing the troops' "brand." 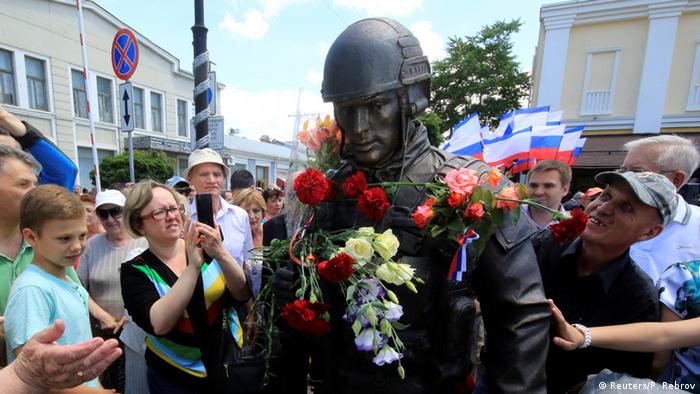 The monument marks the "strength, calm, confidence and politeness of our Russian soldiers," said Moscow envoy Oleg Belaventsev at the Simferopol ceremony.

Crimean officials unveiled the sculpture one day ahead of Russia Day on Sunday. It shows a serviceman with a Kalashnikov, a little girl giving him flowers, and a cat rubbing against his legs.

The bronze statue celebrates the 2014 annexation of Crimea, when unmarked Russian soldiers appeared on the peninsula ahead of a vote to join Russia. Local residents dubbed them "polite people" due to their reserved demeanor.

The mostly peaceful annexation of the region served as a prelude to the violent conflict in eastern Ukraine. Some 9,400 people have died during the 26-month conflict in Ukraine.

A Russian soldier who took part in the takeover also posed for the statue in downtown Simferopol, sculptor Salavat Shcherbakov told the AFP news agency.

The cat, according to the sculptor, shows "that peaceful life has not been interrupted."

"There was one aim: to defend people, so there was no bloodshed," he said of the soldiers.

Crimean leader Sergey Aksyonov expressed his belief that the monument would become popular among residents and tourists.

"These soldiers have created the image of 'polite people' so now we have our very own Crimean brand," he said, according to "Noviy Krim" newspaper.

Aksyonov also vowed to keep developing the brand on the peninsula.

The statue was funded by private donations, and cost around five million rubles ($76,500 or 68,000 euros) to create and install, according to the sculptor.

Over two years have passed since Russia annexed Crimea. Tatars are feeling increasingly insecure in their homeland on the Black Sea peninsula. Juri Rescheto reports from Simferopol. (22.05.2016)