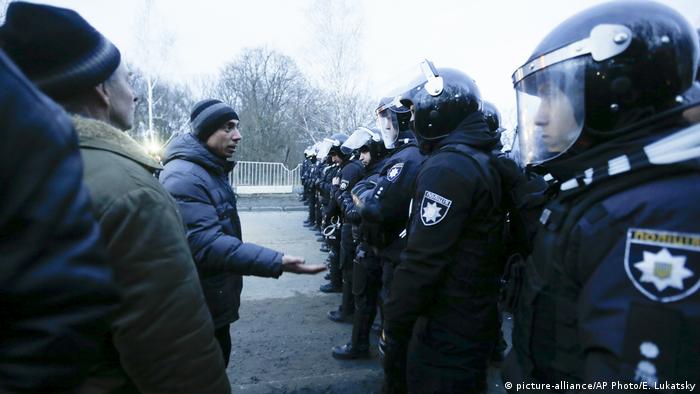 A central Ukrainian town was the scene of clashes on Thursday as outraged residents protested against the arrival of evacuees from China, who were set to be quarantined for the coronavirus.

Some 45 Ukrainians and 27 foreign nationals were evacuated from the Chinese city of Wuhan, the epicenter of the COVID-19 outbreak, and brought to a sanatorium in the town of Novi Sanzhary, east of Kyiv, for a two-week quarantine period.

So far, no confirmed cases of the virus have been registered in Ukraine. But fears of a possible spread of the virus drove locals to confront the convoy of buses that were transporting the evacuees.

In a daylong standoff, residents clashed with authorities, burned tires, attempted to block a bridge and hurled projectiles at the buses. Two of the vehicles' windows were smashed while the evacuees were inside. Protesters shouted "shame on you" at hundreds of helmeted police that had been deployed to maintain order.

"Isn't there any other place in Ukraine that can host 50 people, that is located in more or less remote villages or in far off areas where there is no threat to population?" resident Yuriy Dzyubenko was quoted by Reuters as saying.

Read more: Coronavirus and other dangers: How to stay healthy on the plane

Despite the riots, the evacuees were successfully brought to the clinic, which was promptly sealed off by police. 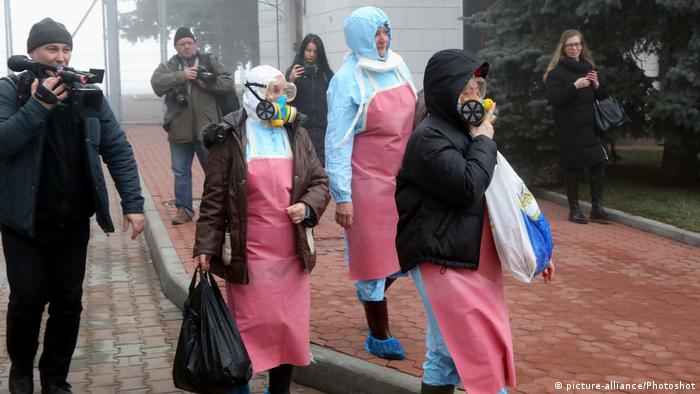 Health minister to be quarantined

In a show of solidarity with the evacuees, Ukraine's health minister announced she will join the quarantine.

"I will spend the next 14 days with them, in the same premises, under the same conditions," Health Minister Zoryana Skaletska said late Thursday in a statement addressed to the residents of Novi Sanzhary.

"These people are our compatriots," she wrote on Facebook. "We live in one country and have to take care of their health and safety." She added that she was "shaken" by the widespread panic and aggression.

Authorities said the group had been screened twice for the virus before being allowed to fly. President Volodymyr Zelenskiy pled for calm, saying the evacuees presented no danger to the community.

"But there is another danger that I would like to mention. The danger of forgetting that we are all human and we are all Ukrainian," Zelenskiy said.

Ukrainians are deeply mistrustful of their government, as the country is plagued by corruption and has a weak healthcare system. The country has also struggled with a measles epidemic, amid reluctance by some to vaccinate themselves and their children.

More than 620 passengers aboard the cruise ship Diamond Princess were infected with the COVID-19 virus. Japanese authorities have been criticized for their handling of the outbreak on the vessel. (20.02.2020)

Chinese health officials are optimistic as the number of new cases of COVID-19 has tentatively stabilized. Health experts think the disease could be less deadly, with many people only showing mild symptoms. (18.02.2020)