While sportspeople around the world train in home gyms under coronavirus lockdown, darts has found a way to hold a tournament. World champion Peter Wright tells DW about the "strange" but innovative PDC Home Tour. 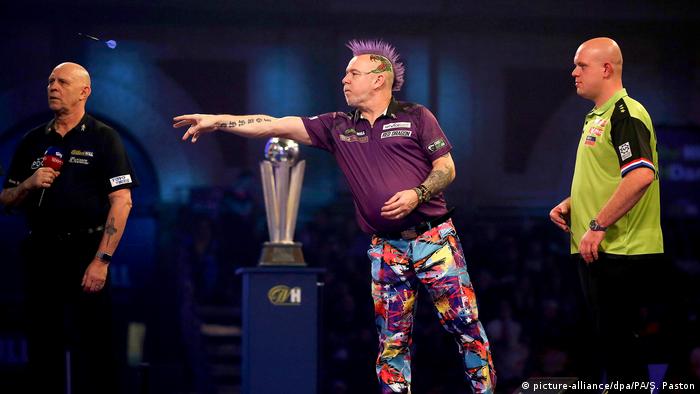 Three darts, a 2.36-meter (7-foot, 8-inch) oche, the throwing line, and a will to win. Aside from a few faces, that's about all that will be familiar to darts fans at the PDC (Professional Darts Corporation) Home Tour, which begins on Friday.

Instead of packed arenas, full bars and chanting crowds, there will be spare rooms, webcams and Skype as the organizers aim to offer live sport to a public deprived of it, and so much else, due to the coronavirus pandemic.

Over 32 nights, 16 players will face each other in round-robin groups of four to determine who reaches the knockouts at a later date. Each player will position a camera between themselves and the board and take it in turns to have their throw and announce their score, while a commentator provides context and oversight.

Wright, who won what's generally considered the more prestigious of the sport's two world titles in front of thousands at London's Alexandra Palace on New Year's Day, believes the absence of spectators will be the most significant change for players.

"The crowd can definitely help out in games and can also sometimes go against you, though that can also help you in a way as well. But it's just good to be playing darts at a competitive level," he says.

"We'll have to see how it goes and, who knows, we could be playing at home from now on! But we'd miss all the crowds. They make the darts." 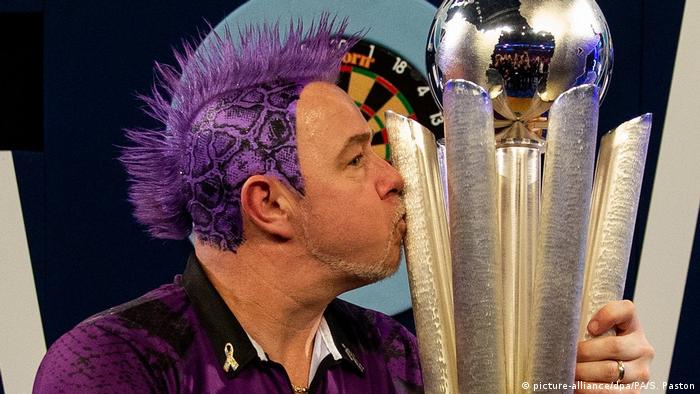 The 50-year-old represents Scotland but will play from his house in England. He counts himself fortunate to have a room dedicated to the sport, despite most of a professional player's life being spent on the road, playing o stage and practicing in hotel rooms.

"It means I don't have to go to a club or pub to practice. I've actually got the room that looks like a pub; it's got a [television] in it and a pool table and the all-essential dartboard as well. It's laser-leveled, so it's millimeter perfect," Wright says.

"It helps me because it's like an escape room. I can pretend I've gone down to a club to practice. It's good for me. It gets me mentally correct."

But the man nicknamed "Snakebite" after his affection for the animals that often feature on his flamboyant, ever-changing hairstyles was tight-lipped on what his wife Joanne — a hairdresser — has in store this time around.

"Apparently, my wife has planned something special for the first one, but you'll have to wait and see on that," he jokes.

The tournament will be broadcast for free on the PDC website, as a series of trial matches were. The CEO of the organization, Matt Porter, tells DW that rather than revenue generation, they hope the tournament will give sports fans missing live action something to watch and perhaps win a few more people over to the sport in the longer term.

"I've not seen anyone else try it. It's just a unique circumstance that has given a unique opportunity to darts. It's not the fault of other sports, but they just can't be played at this time."

With vast swathes of the world under lockdown and the nature of large sporting events meaning thousands of people pack into small spaces, it remains impossible to know when, if ever, the sporting world will return to what was once considered normal. While Porter believes that the PDC Home Tour fills a gap in the market, he doesn't see it as a long-term option for those at the top.

"It's probably not the sort of thing you'll be seeing in five years' time, but that doesn't really matter because it's been designed specifically for this environment, " he says.

"It is the sort of format that could possibly work for social players, but for professionals, it's not what they would expect to be doing. They'd miss out on that close quarter combat they have on the stage and the ability to express themselves in front of a crowd and to get pumped up for a big match."

Wright also accepts that it won't quite be the same and that the lack of a crowd could play into the hands of a few underdogs in what will not be an official ranking event. But whatever the circumstances, and wherever the venue, he remains a sportsman to the last.

"I think there'll be shocks, people might be more comfortable in their own home, with their own dartboard, but obviously I think I can win it — and I want to win it."

With the coronavirus pandemic stopping nearly all live sport, bookmakers are looking to online casino games and virtual sports. Though the football matches and horse races may be virtual, the dangers are all too real. (14.04.2020)

Bundesliga: What are coaches doing during the coronavirus?

In a world gripped by the coronavirus, there is no room for sport as we know it, but football coaches in Germany are trying to find ways to be innovative during this unprecedented period. (06.04.2020)