The US will attempt to prevent new variants of COVID-19 from entering the country by demanding tests from incoming travelers, but not until late January. Follow DW for the latest. 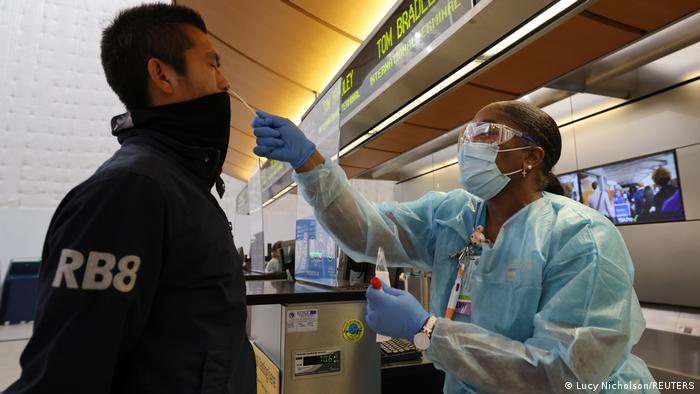 The testing requirement will enter into force on January 26

The US Centers for Disease Control and Prevention (CDC) announced on Tuesday that all passengers flying into the country will need to provide written evidence of a negative coronavirus test within the previous three days.

The new measure will come into effect on January 26 and expands the measures put in place for travelers entering from the UK after the emergence of the new, more-infectious variant.

The CDC will also recommend that travelers stay home for seven days and get another test three to five days after their arrival.

"Testing does not eliminate all risk, but when combined with a period of staying at home and everyday precautions like wearing masks and social distancing, it can make travel safer," said CDC Director Robert Redfield.

Epidemiologists have warned that the new variant discovered in the UK, as well as two others reported in South Africa and Brazil are probably already spreading in the USA.

The announcement came as the US registered a record number of coronavirus deaths on Tuesday with 4,470 people dying from the virus in 24 hours.

Almost half of all UK staff working in intensive care units during the coronavirus pandemic have suffered from severe anxiety, depression or post-traumatic stress disorder, a study published on Wednesday said.

The pressure on health workers had resulted in mental health issues that would likely impact their quality of life and ability to work, with some even reporting having contemplated self-harm or suicide.

Belgium will extend its lockdown measures until March 1, according to a ministerial decree published on Tuesday, the Brussels Times reported.

The rules which closed shops, imposed a night-time curfew and strictly reduced personal contacts were originally planned to end on January 15.

Germany's Robert Koch Institute (RKI) recorded 19,600 new COVID-19 infections and 1,060 deaths on Wednesday. The RKI also reported on Wednesday that over 758,000 vaccinations have been administered thus far in Germany.

China saw its largest increase in infections for five months on Wednesday, recording 155 new confirmed cases, up from 55 the day before. The record surge occurred amid increased restrictions and testing in parts of the country.

Heilongjiang province in the far northeast of the country has entered a state of emergency after recording 16 new cases on Wednesday.

China has also been battling a new outbreak of COVID-19 in the Hebei province near to the capital city Beijing.

The president of Indonesia, Joko Widodo, was vaccinated on Wednesday with the country's first administered dose of the Chinese Sinovac vaccine.

An investigator working for the Brazilian Fiocruz institute confirmed on Tuesday that the new variant, discovered in four Japanese travelers who had passed through the country's Amazon region, derived from a strain which had probably been in the country since December.

India: At least 5 dead after blaze at world's largest vaccine maker 6h ago