Pubs and restaurants have opened with full service, and large gatherings are again allowed across the UK. Meanwhile, cases are spiking in Taiwan. Follow the latest with DW. 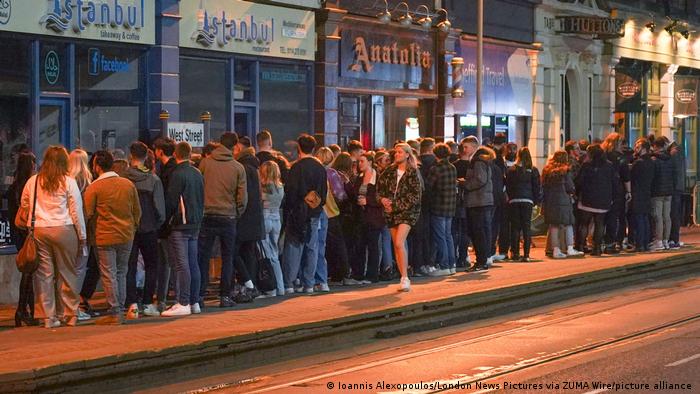 Most of the United Kingdom further eased coronavirus restrictions on Monday, as full indoor service in pubs, restaurants and cafes is now allowed for the first time since January.

In England, large gatherings are now allowed outdoors with relaxed social distancing, and masks are no longer compulsory in schools. Cinemas, theaters and sports venues can also reopen.

The country has also lifted a ban on international travel, although only 12 countries and territories are on a list of permitted destinations.

Rules on close personal contact have also been eased.

However, officials are still urging vigilance, as the so-called Indian variant of coronavirus is circulating in the UK.

"Together we have reached another milestone in our roadmap out of lockdown, but we must take this next step with a heavy dose of caution," Prime Minister Boris Johnson said in a statement.

Although 70% of Britain's adult population has received at least one vaccine dose, Johnson has warned that the planned complete lifting of restrictions on June 21 could be put in jeopardy by a jump in cases.

"We are keeping the spread of the variant first identified in India under close observation and taking swift action where infection rates are rising," Johnson said Sunday.

Here is an overview of the latest coronavirus news from around the world...

France is set to partially loosen coronavirus restrictions on Wednesday, as vaccinations pick up steam and cases continue to fall.

The latest step in France's gradual reopening would allow groups of up to six people to eat together on restaurant terraces, which will open at 50% capacity. A curfew will be pushed back from 7 p.m. to 9 p.m.

Cases in Germany are also falling, with 5,412 new cases reported Monday by the Robert Koch Institute. Germany's overall rolling 7-day case average is now at 83 new cases per a population of 100,000.

EU foreign affairs chief Josep Borrell highlighted the impact of the pandemic on lesbian, LGBT+ people, as the world observes the International Day against Homophobia, Transphobia and Biphobia on Monday.

"The COVID-19 pandemic has led to even higher levels of violence and discrimination against LGBTI persons, including domestic violence, hate speech online and offline, and hate crimes," Borrell said.

All schools in the capital, Taipei, have been closed, and the island has banned all foreigners from entry or transit for a month unless they hold a residency card.

The country's health minister said the suspension will last from Wednesday until June 18.

Taiwan has confirmed a total of just over 2,000 COVID cases throughout the pandemic.

New Zealand and the Cook Islands initiated a travel bubble to go into effect on Monday, a year after the South Pacific island closed its international borders.

The arrangement allows New Zealanders and Cook Islanders to travel between the countries without quarantining.

Thailand has reported a daily record of 9,635 new COVID infections, with 6,853 of the cases breaking out in prisons.

A new poll shows more than 80% of Japanese residents are against hosting the Tokyo Olympics this year, as Japan expanded its state of emergency last week to contain a spike in cases.

The latest survey, by the Asahi Shimbun newspaper, found that 43% of respondents want the games canceled, and 40% want them to be postponed further.

Saudi Arabia will allow vaccinated citizens to leave the kingdom without prior permission, easing a travel ban that was in place for over 14 months.

Saudi nationals who have been vaccinated with at least one dose two weeks ahead of traveling, and those who have recovered from COVID within the last six months, will be allowed to travel.

In March 2020, Saudi Arabia imposed a ban on international travel.

South Africa has kicked off a massive vaccination campaign to inoculate nearly 5 million people over the age of 60 by the end of next month.

"We will begin to vaccinate citizens 60 years and older, who are the most vulnerable for becoming ill or dying of COVID-19," Health Minister Zweli Mkhize said during a webinar, explaining that the goal can be achieved if vaccine orders were delivered on time.

Despite being one of Africa's hardest hit countries by COVID, South Africa has vaccinated less than 1% of its population, mostly health workers.

UNICEF Executive Director Henrietta Fore urged G7 countries and the European Union to donate vaccines to the COVAX vaccine-sharing scheme to bridge the gap in supplies caused by the curbs imposed by India as it battles a deadly second wave.

Rich countries "could do this while still fulfilling vaccination commitments to their own populations," she said.

The vaccine will now move to a late stage trial, and drugmakers hope to see it approved later this year.

The Indian Premier League cricket season has been halted indefinitely after several players tested positive for the virus. The country has surpassed 20 million confirmed infections.

For the first time in over a year, people can travel to New Zealand from Australia without having to contend with a strict quarantine. The countries' leaders hope to expand the arrangement.

Will a summer vacation still be possible despite the pandemic?

Strict travel restrictions still apply in Germany, and the traditional spring vacations have largely been canceled. The chances for the summer are much better.