The airline wants Australia's vaccination program to be "effectively complete" before it resumes global travel. Meanwhile, Hungary is facing its worst two weeks since the onset of the pandemic. Follow DW for more. 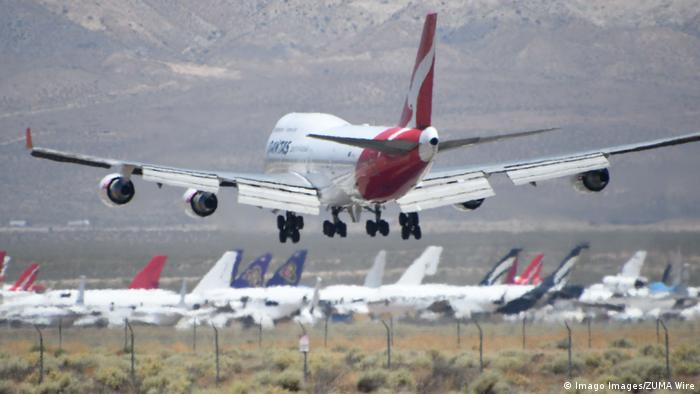 Qantas was hoping to resume global travel in July

Qantas Airways does not expect to resume intercontinental travel until late October, the Australian airline's chief executive said on Thursday.

In January, Qantas began selling seats for international flights from July 1. But recent surges in coronavirus cases, aligned with more infectious variants, has put a halt to those plans, Joyce said.

Those who purchased tickets for flights after July 1, and before October 31, are now being given refunds.

As European Union leaders gather to discuss the notion of vaccine passports, the WHO said the continent needs to do more to help patients suffering from the long-term effects of the coronavirus, the head of the health body's European office said.

"The burden is real and it is significant. About one in ten COVID-19 sufferers remain unwell after 12 weeks, and many for much longer," Hans Kluge of the Copenhagen-based agency said.

He added that countries should pool data and study protocols so as to "improve longer term outcomes for patients" suffering from what is known as "Long Covid" or "Post Covid syndrome."

Hungary is entering its toughest period since the start of the pandemic, Prime Minister Viktor Orban said.

"I have only bad news," Orban said in a Facebook video. "We are facing the hardest two weeks since the start of the pandemic. The number of infections is rising sharply and will continue to rise due to the new mutations."

Ukraine has registered an almost 40% increase in cases over the past 24 hours, Health Minister Maksym Stepanov said, just as the country began its COVID-19 vaccine rollout.

A total of 8,147 cases have been recorded, the highest figure since mid-January, Stepanov said on Facebook.

On Wednesday, Ukraine started its inoculation program, with 159 medical workers getting the first dose of the AstraZeneca vaccine, the first batch of which came to the country from India the day before.

Greece will not be lifting lockdown restrictions in the wider Athens area next Monday as planned, following a sharp increase in infections, Prime Minister Kyriakos Mitsotakis has announced.

Athens metropolitan area, where half of Greece's 10.7 million population lives, has been under strict lockdown measures that had been set to expire at the end of the month.

The Czech Republic will get 100,000 doses of the BioNTech-Pfizer vaccine from France by mid-March, Czech Prime Minister Andrej Babis has told CTKnews agency.

The Czech Republic has endured one of the highest COVID-19 rates in the world, in terms of infections and deaths per million people. As a result, the government is seeking to toughen lockdown measures and speed up inoculations to ease the burden on overstretched hospitals.

Hit by supply issues, the Czech Republic is lagging the EU average in vaccination rates, according to the Our World in Data website.

Neighboring Slovakia, which has been hit hard by a new wave of infections, has also called on EU partners for help in acquiring vaccines.

Germany's Robert Koch Institute (RKI) has reported 11,869 new cases and revealed the country's seven-day incidence rate has risen slightly to 61.7, from 59.3. The figure indicates how many people per 100,000 inhabitants have contracted the coronavirus in the past seven days.

The federal and state governments want this figure to reach a sustained level of 35 or below before it considers opening the country up.

India has recorded its highest number of infections in almost a month. The country reported 16,738 new infections, health ministry data showed, for the highest daily jump since January 29.

The Japanese government will end a state of emergency in five prefectures west of Tokyo at the end of this month, a week earlier than planned, according to the Kyodo news agency. Osaka, Kyoto, Hyogo, Aichi and Gifu prefectures will all have their emergency measures lifted.

Also in Japan, organizers of the delayed Olympic torch relay said fans could line the route when it kicks off next month, but cheering will be strictly prohibited.

Philippine soldiers will be required to get coronavirus vaccines, the military said, as the country prepares to receive its first doses and begin its inoculation process.

The African Union has urged drugmakers to waive some intellectual property rights on COVID-19 medicines and vaccines in order to speed up their rollout to poor countries, the head of its disease control body has said.

John Nkengasong, director of the Africa Centers for Disease Control and Prevention, told reporters that IP transfer was a "win-win for everybody" that would address the huge inequalities in worldwide public health.

Stretching timing of second shot 'could save lives'