Israeli researchers found that a fourth dose of a COVID-19 vaccine provided "only partial defense" against omicron. Meanwhile, Moderna plans to have a vaccine ready for the variant this spring. Follow DW for more. 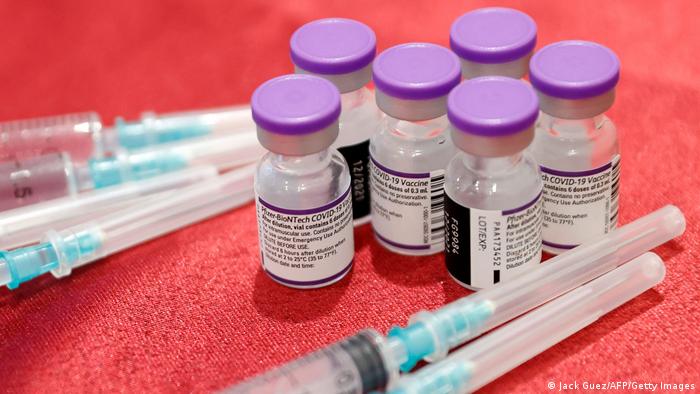 An Israeli study found that a fourth shot of the COVID-19 vaccine was able to boost antibodies to higher levels than the third shot, but researchers found that it is still not enough to prevent omicron-variant infections, researchers at Israel's Sheba Medical Center said on Monday.

This is the first trial worldwide studying a fourth vaccination with combined vaccines, the Israeli hospital said, adding that the findings were preliminary and have not yet been published.

"The rise in antibody levels that we saw with both Moderna and Pfizer are slightly higher than what we saw after the third booster vaccine," said lead researcher and director of the infectious disease unit, Gili Regev-Yochay.

However, "despite increased antibody levels, the fourth vaccine only offers a partial defense against the virus," she added.

Meanwhile, US drugmaker Moderna said its vaccine candidate against the omicron coronavirus variant will enter clinical development in the next few weeks. The company expects to be able to share data with regulators around March, CEO Stephane Bancel said.

The company also aims to roll out a combined COVID-flu-RSV booster vaccine in late 2023, hoping a joint jab would encourage people to get an annual shot.

RSV (respiratory syncytial virus) is a common virus that causes the cold that can be more serious for infants and elderly people.

The European Union said it would tighten COVID-19 travel rules for unvaccinated arrivals from Australia, Argentina and Canada.

The bloc reached an agreement to remove those three nations from a list of countries where easier travel restrictions apply regardless of vaccination status, which include countries like Bahrain, Chile, Colombia, Indonesia, Kuwait, New Zealand, Peru, Qatar, Rwanda, Saudi Arabia, South Korea, among others.

EU citizens arriving from Australia, Argentina and Canada are exempt from the new rule, along with their family members, as well as long-term residents of the bloc. Health care and transport personnel are also exempt.

In Germany state health ministers met on Tuesday evening to mull relaxing PCR testing requirements to ease the burden on laboratories when caseloads are high.

The ministers have reduced the period that counts as COVID-recovered from 6 months to 3, citing the omicron variant.

"Data from Switzerland shows again: Hardly any people who have been boosted die from COVID and very few people who have been vaccinated," Lauterbach tweeted on Monday evening, as he endorsed a "vaccine obligation for all" as it will mean avoiding "renewed restrictions" later.

He also said Germany should expect the variant to be a major burden on hospitals and critical infrastructure, even though omicron results in half as many hospitalizations as the delta variant. This is due to the higher number of infections, according to recent studies coming from the US.

Meanwhile, the country on Monday recorded another high in its seven-day incidence rate of coronavirus infections, according to the Robert Koch Institute (RKI), while reporting 30 new deaths related to the virus. The health authority registered a record 528.2 new infections per 100,000 people, surpassing the 515.7 reported on Sunday.

The figures were much higher than the 375.7 new infections per 100,000 people per week seven days ago.

Teachers in France called for a second national strike, saying class disruptions have become unmanageable due to the highly contagious omicron coronavirus variant.

French teachers' unions are asking the government to hire enough substitutes to replace absent teachers, who are out sick with COVID-19. They are also demanding more protection equipment and greater investments in the French education system, where average teacher pay lags behind that of many other European nations.

The strike comes as France saw the biggest one-day increase in hospitalization since early November 2020.

Poland has now entered its fifth wave of COVID-19 infections, the health minister said, warning that the spread of the omicron variant could send daily case numbers soaring to levels not yet seen in the country.

While daily case numbers have fallen since early December, Poland has had little respite since the fourth wave, regularly reporting over 10,000 new infections per day amid low vaccine take-up and limited restrictions on public life.

"We predict that the peak of infections will be in mid-February and that peak is about 60,000 cases a day," Health Minister Adam Niedzielski told a news conference.

South America's hospitals are under pressure due to the omicron variant, as employees falling sick, leaving facilities understaffed to cope with COVID-19's third wave.

A major hospital in Bolivia's largest city stopped admitting new patients due to lack of personnel, while one of Brazil's most populous states canceled scheduled surgeries for a month. Argentina's federation of private healthcare providers told the AP that some 15% of the country's health workers currently have the virus.

It all comes as some two-thirds of roughly 435 million residents of South America are fully immunized, the highest percentage for any global region, according to Our World in Data.

Canada approved drugmaker Pfizer's anti-COVID pill, Paxlovid, for adults at high risk of progressing to serious disease. The government approved it after an "expedited review," Health Canada said in a statement on its website, adding that it would continue to monitor its safety and effectiveness.

"No drug, including PAXLOVID TM, is a substitute for vaccination," the statement added. The drug, which comprises two types of tablet, is the first coronavirus therapy which can be taken at home.

India's Gennova Biopharmaceuticals said it is working on an omicron-specific mRNA COVID-19 vaccine candidate. A person with direct knowledge of the matter told Reuters the product could be ready within two months.

"The Omicron-specific variant of the vaccine is under development and will be ready for human clinical trials, subject to regulatory approvals," a company spokesperson told Reuters.

China said it will not sell Olympic game tickets to the general public. Only "selected'' spectators will be permitted at next month's Beijing Olympics due to the coronavirus pandemic, organizers confirmed. Beijing had already banned fans from outside the country.

The announcement comes as China has seen the highest number of coronavirus cases in nearly two years, just weeks before it is set to host the winter Olympics.