Cooking with the power of the sun | Environment | All topics from climate change to conservation | DW | 03.02.2010

Cooking with the power of the sun

Some three billion people worldwide rely on dung, wood and charcoal to cook their food - with catastrophic effects on the environment. Cookers powered by the sun provide a cheap and clean alternative. 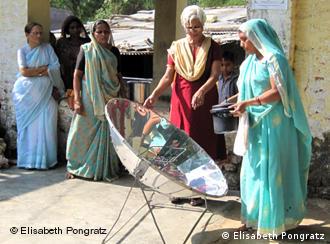 In the aftermath of the devastating earthquake that hit Haiti recently, thousands of people need food and drinking water. But clean water in particular remains a problem.

The quake damaged water pipes in many places and health experts warn that alternative water sources run the risk of being contaminated by bacteria. Boiled water is the only safe option but cooking involves several hardships in Haiti, because firewood used for cooking fires is either expensive or requires painstaking gathering. 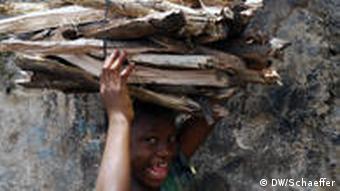 In many parts of the world, people walk miles to gather firewood

But it's not just Haiti that stands to profit from the appliances. In many developing countries, solar cookers can potentially raise living standards and help combat climate change. It's estimated that cooking fires fuelled by dung, dry grass, charcoal and, above all, wood are responsible for 17 percent of global carbon dioxide emissions.

An estimated three billion people are dependent on such fuels but cooking with wood leads to the erosion of forest cover, in turn silting up rivers.

And gathering firewood also involves trudging for miles and consumes time that could be better used to work and earn money. In addition, cook stoves spew soot into the atmosphere, polluting the air. The thick clouds of smog seen over much of South Asia each winter can largely be traced back to open cooking fires, according to a Swedish study.

Worse, the "black carbon," as the soot is known, also has devastating health effects. The World Heath Organization (WHO) estimates that 1.5 million people die each year of respiratory illnesses linked to inhaling wood smoke. 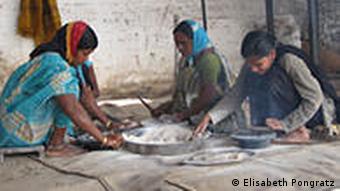 The problem is now seen as a major climate killer and hundreds of organizations, many of them in Switzerland, Austria and Germany, have begun campaigns to distribute solar cookers worldwide. Governments too are pushing the appliances in numerous climate-friendly projects.

"The technology has been refined and the potential to mitigate climate change is huge. But what's missing is a wider acceptance," said Marlies Kees of the GTZ in Germany, a state-backed international organization for sustainable development.

"People need a contact person, someone who has spare parts and who encourages them to continue using the solar cookers, " said Hans Milchbauer.

He added that too often, people are initially convinced of the cookers but quickly switch back to conventional wood-fired cooking stoves.

Solar cooking technology has come a long way. There are almost 200 different models ranging from large parabolic cookers that use reflectors to concentrate sunlight to a simple solar cooker called a "Kyoto Box."

The Kyoto Box is made from cardboard and can be used for sterilizing water or boiling or baking food. It uses reflective foil and black paint to maximize absorption of solar energy.

Most solar cookers work on basic principles: sunlight is converted to heat energy that is retained for cooking. One or more mirrors or shiny surfaces concentrate sunlight on a dark pot within the cooker. The pot usually has a tight-fitting lid to hold in heat and moisture.

However, the technology doesn’t work everywhere. The cookers cannot be used in places with little sunlight, where cooking is usually done indoors or where there is no acute shortage of firewood.

"In such cases, it probably makes sense to combine solar cookers with energy-efficient ovens for example, " explained Willington Ortiz from the Wuppertal Institute, which researches the use of solar cookers. 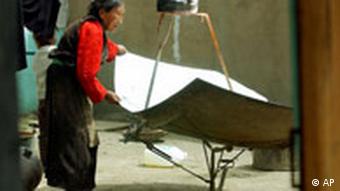 A woman in Tibet uses a solar cooker to boil water

The appliances work best in regions with high treeless plateaus which receive lots of sunshine. Some 600,000 cookers are in use in the Andes, Tibet, Nepal, Mongolia and parts of China.

A big hit in India

But it is in India where solar cookers have proved to be the biggest hit, according to the SCIA. The Indian government is promoting the use of the cookers, particularly in villages in the countryside, as part of a national solar energy drive.

Solar companies have recognized the huge potential a market like India offers for solar cooking to become a sizeable economic force. The company Gadhia Solar, the world's largest producer of solar cookers, is transforming whole villages in India. One such place in the northern state of Uttar Pradesh has cleaned up its act by completely switching to solar cookers. Some 20 other villages have signaled interest in signing up for similar projects.

Gadhia Solar also builds large solar systems for temples and hospitals. It has set up 18 large solar facilities so far, which combined is estimated to slash greenhouse gas emissions by 4,000 tons by 2012. That is equivalent to the carbon emissions of 3,600 Indians each year.

One of the most promising solar projects in India is the Muni Seva Ashram in the western state of Gujarat attended by hundreds of school children. Food in the school's canteen is prepared entirely in solar cookers.

Experts say this is just the kind of initiative that's needed to push solar cooking into the public sphere.

"It's so important to strengthen the role of solar cooking in schools and universities," said Marlies Kees. "It's going to take a generation to change our behavior. You need to begin with it as early as possible."

For relief organizations in Haiti, understanding the earthquake's full damage is difficult. Workers only see what is immediately in front of them. A German institute now provides satellite-based maps as a solution. (22.01.2010)

After the earthquake hit Haiti, millions needed immediate help. Medeor responded quickly to the disaster because it has been specializing in providing emergency health kits to developing countries for over 40 years. (22.01.2010)

Blog - Ideas for a Cooler World