Controversial Stuttgart 21 rail project to go ahead | Germany | News and in-depth reporting from Berlin and beyond | DW | 28.11.2011

After months of protests and attempts at reconciliation between the sharply divided political camps, the people of Baden-Württemberg have voted in favor of the controversial renovation of Stuttgart's main train station. 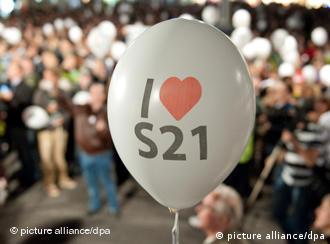 Nearly 60 percent voted in favor of the project's continuation

The controversial Stuttgart 21 rail project, which has polarized political discourse in the German state of Baden-Württemberg and sparked months of protests, is set to go ahead.

Voters in the southwest state backed the project, which will see a major renovation of Stuttgart's main train station, in a popular referendum on Sunday.

The rising costs of the 4.5-billion-euro ($5.9 billion) project triggered a wave of demonstrations in September 2010, leading to clashes with police in which many were injured. Later attempts to reach a compromise between supporters and opponents of the project through a publicly televised mediation process largely failed, ultimately leading to the first popular referendum in Baden-Württemberg in four decades.

Nearly 60 percent of those who went to the polls were against pulling the plug on the state government's 930-million-euro share of the financing for Stuttgart 21, voting in favor of the project's continuation. The German federal government, the European Union and the city of Stuttgart are also picking up part of the bill.

Stuttgart's main train station is set to be largely replaced by underground infrastructure that aims to support a high-speed rail network stretching from Paris to Budapest.

State Premier Winfried Kretschmann, head of Baden-Württemberg's center-left coalition government, conceded defeat in the referendum. His Green party had staked out a position of staunch opposition to Stuttgart 21.

"The people have spoken," Kretschmann said on Sunday evening. "I accept the results, even if it does not conform to my wishes." 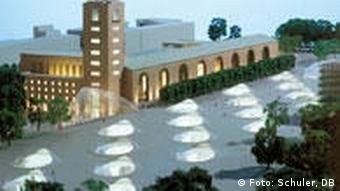 Within the political establishment, Kretschmann's Greens had isolated themselves through their opposition to Stuttgart 21. Even their junior coalition partners, the Social Democrats, were largely supportive of the project.

"It was a burden for the coalition," said Kretschmann. "Now it's been decided. But we shouldn't deceive ourselves - overseeing Europe's largest construction site will always be a challenge."

Thomas Strobl, head of the conservative Christian Democrats in Baden-Württemberg, called on Kretschmann to calm the project's opponents. Hans-Ulrich Rülke, leader of the liberal Free Democrats in parliament, said the legitimacy of Stuttgart 21 could no longer be placed in question.

"Whoever still questions this project, whoever still protests and believes that it can be impeded, is undemocratic," said Rülke.

Hannes Rockenbauch, the spokesman for the alliance against Stuttgart 21, expressed disappointment at the result but said the rare referendum was an achievement for direct democracy.

Several thousand protesters have turned out in Stuttgart to express their opposition to disputed and costly plans to completely overhaul the city's main railway station. (09.07.2011)

Germany's normally conservative southwestern state of Baden-Württemberg gets a Green premier - a first for one of Germany's economic powerhouses. (12.05.2011)

The Green party and the Social Democrats in the German state of Baden-Württemberg have presented their coalition agreement. For the first time ever, a Green politician is set to become state premier in Germany. (27.04.2011)