Croatia's conservative opposition has narrowly won the country's first general election since it joined the EU in 2013. They now face the challenge of negotiating with smaller parties to form a coalition government. 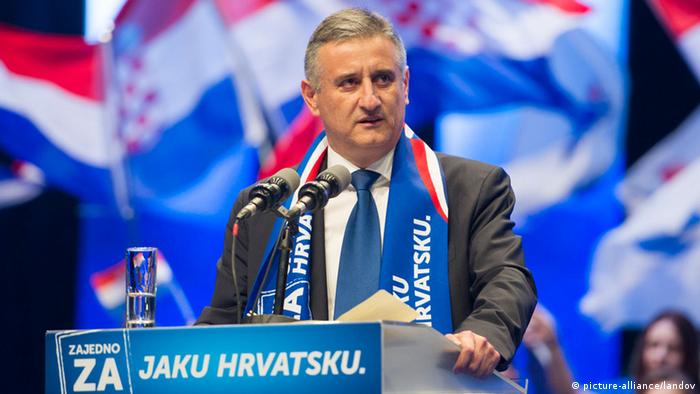 The state electoral commission said Monday that the conservative Croatian Democratic Union (HDZ) had won 59 seats in the 151-seat parliament.

"We won the parliamentary elections... The victory brought us responsibility to lead our country, which is in a difficult situation," HDZ leader Tomislav Karamarko (pictured above) told cheering supporters. "Whoever wants to fight with us for the quality of life in Croatia is welcome."

The preliminary result means both blocs have failed to win an outright majority. The forming of the new government will now depend on several small parties that entered parliament.

The kingmaker could be the third-placed party, Most ("Bridge" in Croatian), with 19 seats.

Prime Minister Milanovic called on the party, which was founded just three years ago, to start talks on a new coalition.

"Croatia has decided for a change," Milanovic said. "We cannot do it alone."

Most leader Bozo Petrov said during the campaign that his party would not enter into an alliance. However, he also said Most would only support a future government if it took steps to improve the business environment, and reform the judiciary and public administration.

"For each of those reforms we would set deadlines and if deadlines were not met, we would demand a parliamentary no-confidence vote," he told national broadcaster HRT. "We know that, as things stand now, we control the majority in the parliament."

Whatever its makeup, the new government will have its work cut out for it. Sunday marked the Balkan country's first parliamentary election since joining the European Union in 2013. It is currently emerging from six years of recession and remains one of the EU's poorest performing economies.

The country of 4.2 million is also grappling with a migrant crisis, which has seen 330,000 people crossing its borders on their way to northern Europe.

The nationalist HDZ, which steered Croatia to independence from Yugoslavia in 1991, has accused Milanovic's government of being too soft on migrants. They've pledged to take tough measures like erecting fences and deploying the army to manage the flow.