Conservative Gaffe Enrages East Germans | News and current affairs from Germany and around the world | DW | 11.08.2005 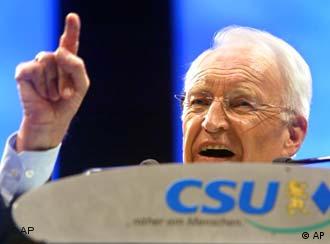 It was the second time in as many weeks that Merkel, who has a strong but shrinking lead in the polls, was sideswiped by a fellow leading conservative in the depressed east ahead of the national election next month.

Bavarian state premier Edmund Stoiber, who ran on the Christian Union ticket against Chancellor Gerhard Schröder in 2002 and narrowly lost, told a small group of supporters and journalists that the east had too much power over the poll's outcome.

"I do not accept that the east will again decide who will be Germany's chancellor. It cannot be allowed that the frustrated determine Germany's fate," Stoiber said, in comments made last week and first reported late Wednesday. 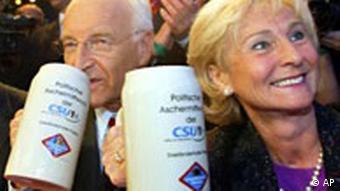 Edmund Stoiber and his wife, Karin

"If only everywhere else were like Bavaria, we would not have any problems at all. But unfortunately, ladies and gentlemen, we do not have such intelligent members of the population everywhere like we have in Bavaria," he said.

"The strong must sometimes carry the weak a bit. That's the way it is... I do not want the election to be decided in the east yet again."

But the latest broadsides come at a time when nerves are raw in the eastern states, where unemployment is twice as high as in the west nearly 15 years after national reunification.

The interior minister of the eastern state of Brandenburg, Jörg Schönbohm of the CDU, enraged voters in the region last week by blaming a lingering breakdown in social values under communism for fostering a horrific case in which a local mother was accused of killing nine of her newborn babies. Angela Merkel has had a few less-than-ideal interactions with journalists of late.

Merkel, who has made a few missteps of her own in recent speeches and interviews, was forced to reprimand the outspoken minister but not before his remarks drew a hail of criticism from offended easterners.

The gaffes have suddenly revived an election campaign that looked all but decided, costing Merkel's CDU/CSU alliance a point or two in some polls and robbing her of momentum ahead of the September 18 poll.

They have also put a new spring in Schröder's step after the charismatic chancellor, in power since 1998, had all but been written off.

But above all, pollsters say the conservatives' outbursts have helped a new breakaway alliance called the Left Party, comprising the ex-communist Party of Democratic Socialism and members of the disaffected left-wing of Schröder's Social Democrats. 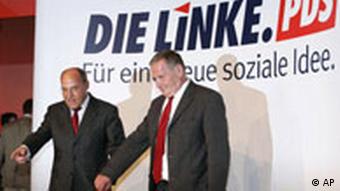 PDS chairman Lothar Bisky, right, and top candidate Gregor Gysi on stage during the party congress of the former East German communists, the Party of Democratic Socialism, PDS, in Berlin

The Left Party, which has ruled out a role in a governing coalition, is currently polling at more than 30 percent in the east ahead of the CDU/CSU and looks set to scupper the conservatives' goal of winning outright in the region.

Its rise has also reshuffled the electoral deck as analysts attempt to predict the next ruling coalition, increasing the likelihood that Merkel will be unable to win a ruling majority with her preferred coalition partner, the Free Democrats.

The new arithmetic may mean that Merkel is forced into the highly rare political constellation of a "grand coalition" with the Social Democrats, forcing the arch rivals to form a government.

The alleged killing by an east German mother of nine of her newborn babies became an election issue Friday as candidates lambasted an official who blamed attitudes in the former communist states for fostering the crime. (Aug. 5, 2005)

Nazi Jibes a Recipe for Disaster

German politicians know that using words loaded with Nazi ideology or making comparisons to people or things from the Nazi era will land them in hot water and possibly end their careers. So why do they keep doing it? (July 19, 2005)

German conservatives meet in Berlin to discuss election strategy on Wednesday before Angela Merkel sets out on her 40-day nationwide tour. Meanwhile, Gerhard Schröder is cutting a confident figure on the campaign trail. (Aug. 10, 2005)