Baby Deaths Become an Election Issue | News and current affairs from Germany and around the world | DW | 05.08.2005

The alleged killing by an east German mother of nine of her newborn babies became an election issue Friday as candidates lambasted an official who blamed attitudes in the former communist states for fostering the crime. 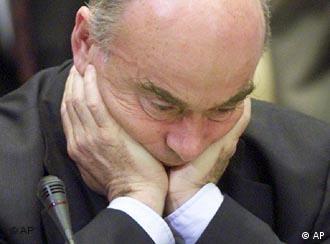 Jörg Schönbohm has been widely condemned for his comments

Conservative candidate for chancellor Angela Merkel was forced to reprimand Brandenburg state interior minister Jörg Schönbohm after he argued that "forced proletarianization" by the communist regime had led to a lasting breakdown in traditional values and a prevalence of violence.

"Such a horrible crime cannot and must not be explained with generalizations of this kind," said Merkel, who is the first major contender for the chancellery to come from the depressed east, where Schönbohm's comments drew a hail of criticism.

"I spoke with Jörg Schönbohm (who belongs to Merkel's Christian Democratic Union party) and expect him to end this discussion as soon as possible."

Chancellor Gerhard Schröder, sensing an opportunity to score points in a region where a new breakaway political grouping, the Left Party, has been gaining ground, said that Schönbohm had "insulted the people of the east" with his "pseudo-psychology" and confused his historical facts. 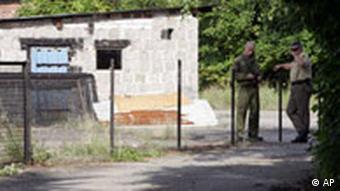 The nation was shocked to learn Monday that a 39-year-old unemployed dental hygienist in Brandenburg identified as Sabine H. had been charged with killing nine of her newborn babies over an 11-year period and burying their remains in and around a storage shed.

Schönbohm apologized for his remarks Friday but said he was trying to offer reasons why no one in her circle of friends, relatives and neighbors had noticed the astonishing cycle of pregnancies and deaths.

The strong lead enjoyed by Merkel's Christian Union alliance and her chosen coalition partner, the liberal Free Democrats, has slipped slightly in recent weeks, a drop which could rob them of a governing majority on election day. Germany is to go to the polls September 18. 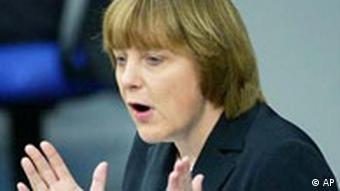 Merkel has not helped matters with a series of blunders this week while explaining key planks of her economic program, leading the normally staid Berlin daily Tagesspiegel to splash the headline "It's the Economy, Stupid!"

Meanwhile, the east is considered to be a crucial battleground where shifts of a few percentage points could have an impact on the final outcome.

The ex-communist states, with a population of about 16 million in a country of 82 million, are often seen by political scientists as a region where the national election cannot necessarily be won but can certainly be lost.

In other words, steep losses or strong gains in the east can tip the scales in a close vote, as they did in 2002 when Schröder narrowly won re-election. 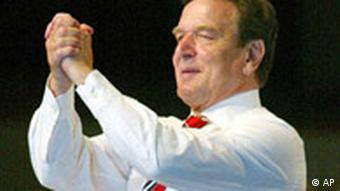 A poll released Friday showed Schröder's Social Democrats (SPD) with 28 percent support, up two points from last week, versus 42 percent for Merkel's CDU/CSU, down one point.

The junior partner in the ruling coalition, the Greens, tallied nine percent against eight percent for the Free Democrats.

The Left Party scored nine percent in the poll by the Forschungsgruppe Wahlen, and was the most popular party in the east.

Separately, the Left Party's chief candidate from the east, Gregor Gysi, ruled out forming a coalition with the SPD after the election, despite polls indicating that an alliance of the two parties plus the Greens could win a governing majority.

Schröder and Greens leaders have already rejected the idea of a coalition with the Left Party.

As Germany marked the 15th anniversary of the fall of the Berlin Wall, the country's politicians took stock of the state of the nation -- and concluded that East-West discrepancies are still cleaving the country. (Nov. 10, 2004)

Police investigating the suspected worst case of infanticide in German postwar history said they were searching Wednesday for further possible remains, days after the discovery of nine dead newborns. (Aug. 5, 2005)

A Land of Differences

While the core of German president Horst Köhler's remarks on differences in living and employment standards focused on eastern and western states, figures published on Tuesday show discrepencies across the whole country. (Sept. 14, 2004)