Conditions Set On EU Candidate Status for Serbia | Europe| News and current affairs from around the continent | DW | 03.09.2008

Serbia wants EU candidacy status next year, but needs to hand over more war criminals to the UN tribunal first, the bloc said. Other differences between Brussels and Belgrade run from trade to Kosovo. 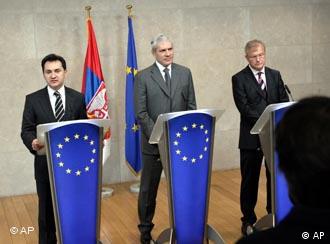 Belgrade stressed the need to ratify a trade agreement with the EU, but disagrees with EU on Kosovo.

"It would be possible to give candidate status to Serbia, but this is not a commitment," Barroso said. "It depends on conditions being fulfilled."

Among the conditions is Serbia's cooperation with the UN's International Criminal Court in The Hague, where former Bosnian Serb leader Radovan Karadzic is being tried for wartime crimes.

Serbian leaders had hoped that Karadzic's arrest in July after 13 years in hiding would be a first step towards EU membership. However Karadzic's close aide and wartime general Ratko Mladic still remains at large. 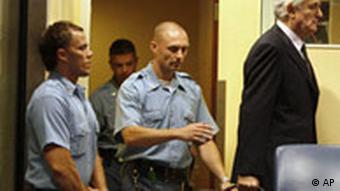 The EU said it would wait for war crimes prosecutor Serge Brammertz to report on whether Serbia was fully cooperating with the UN tribunal, before taking any concrete steps towards Belgrade's aspirations for EU membership.

"I encourage this new government of Serbia to continue its efforts in order to clear the hurdles from the European Union road completely," Barroso said. "It is important to ensure full cooperation with International Criminal Tribunal for the former Yugoslavia (ICTY)

He added that Karadzic's arrest was an "historic moment and a milestone for Serbia's European aspirations."

Since being sworn in for a second presidential term in February, Tadic, a pro-Western leader who is a strong proponent of Serbia joining the 27-nation bloc, has been rapidly moving his country in the path towards EU integration. The Serbian government hopes to qualify for EU candidacy by early next year, a path it hopes will conclude with full membership by 2014.

"Serbia is going to do everything possible to speed up this process," said Tadic on his first visit to Brussels since being re-elected. "We are going to continue our cooperation with The Hague tribunal." 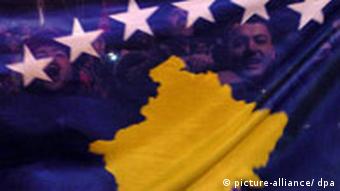 Most EU nations recognise Kosovo, but not Belgrade

Tadic said his administration was "doing everything possible to find Mladic, and I promise that we're going to continue our cooperation with the tribunal."

The AFP news agency, however, cited a Bosnian daily newspaper report last month in which Mladic was already in talks with Serbia's secret services about his surrender.

EU and Serbia divide over Kosovo

Tadic also stressed his country's need to ratify the Stabilization and Association Agreement, which was signed with the EU in Belgrade last April. The trade and political pact, which fosters closer ties with the EU, has been frozen pending Serbia's cooperation with the Hague tribunal.

Barroso said the progress Tadic's government had made "should be reflected on" by member states in implementing the trade-related part of the agreement.

However, one matter which remains non-negotiable for the Serbian leadership is independence for the breakaway province of Kosovo. Most EU nations and the United States have recognized the predominantly ethnic Albanian enclave that unilaterally declared its independence from Serbia in February after nearly a decade under UN administration.

Belgrade sees the region as an integral part of Serbia.

The European Union said it will keep a close eye on developments in Serbia following the arrest of war crimes suspect Radovan Karadzic. But the bloc is not going to rush to pursue trade talks with the Balkan nation. (29.07.2008)