Combined anti-Islam groups no match for united Cologne | Germany| News and in-depth reporting from Berlin and beyond | DW | 25.10.2015

As a few hundred people rallied against migrants on a dirt lot in eastern Cologne, several thousand rocked out at a street fair blocks away. It would be hard to call them rival demonstrations, Milan Gagnon reports. 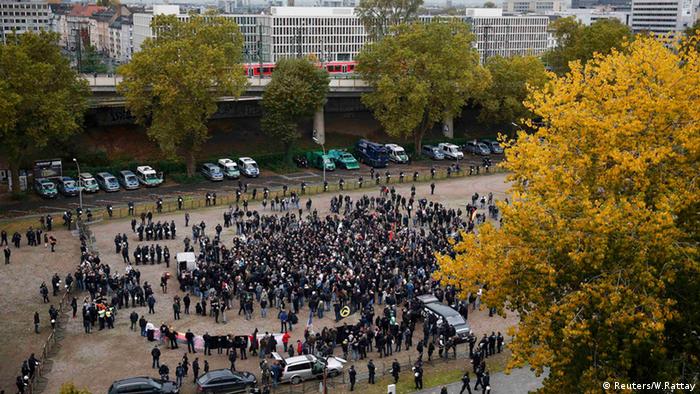 On Sunday, hoping for a repeat of 2014's street fights in the city center, the extremist Hooligans Against Salafists joined forces with Cologne Against the "Islamization" of the West. The two groups showed up to find a street party - one they couldn't attend. Instead, a relatively united HoGeSa and Kögida, as they are known under their respective German acronyms, drew a paltry few hundred people, a thousand at the most, to their pen in a dirt lot wedged between Cologne's Deutz station and the city's massive trade fair compound, which was empty this last Sunday of October.

Thirty-five hundred police stood vigil. Many of those ringed the anti-migrant rally; however, many, many more watched the counter-protest, where anti-racist Carnival songs competed with chants of "No human is illegal." Separated by this mass of riot police from the people they had come to confront - and forced to hold their event off any natural foot route to anywhere of interest in the city - HoGeSa and Kögida had only one another for company.

Police kept water cannon trucks on hand at both demonstrations, which were held just a few hundred meters apart, but completely out of sight and earshot from one another. Officers patrolled the "demilitarized zone," which they used as their de facto break room, puffing cigs before holding the line, though, for the most part, no one tried to cross it. In that sense, the water cannon seemed more of an intimidation device. 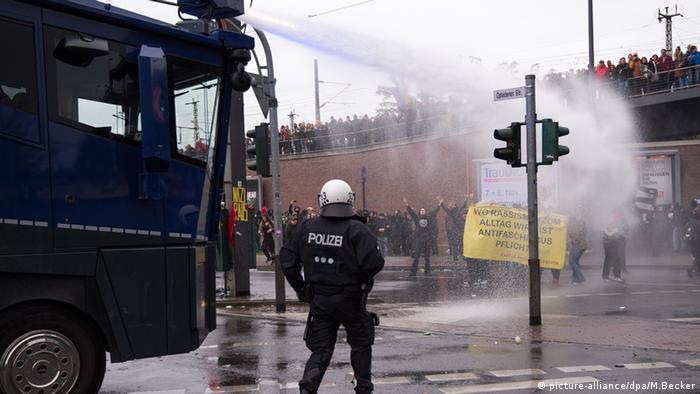 Water cannon were used briefly at the counter-protest

HoGeSa and Kögida, an offshoot of Dresden-based extremists Patriotic Europeans Against the "Islamization" of the West (PEGIDA), had planned to hold complementary rallies on either side of the Rhine River, with start times staggered to allow right-wingers to attend both. However, with low numbers expected, Kögida canceled its party and called on attendees to cross the river and join their comrades in the pen behind the Deutz station.

A year ago, HoGeSa stormed the downtown side of the Rhine, an intentionally provocative action in a city where one in three residents is considered to have a "migration background." (The complicated demographic category means, among other things, a person who was born abroad, has at least one parent who was, or has a parent who was born as a noncitizen within Germany.) Police had sought to ban the group from returning, citing four dozen officers injured at last year's rally, and there was general worry throughout the city over a new march by a couple of thousand avowed right-wing extremists, especially just over a week after a mayoral candidate was stabbed for her perceived friendliness to migrants. 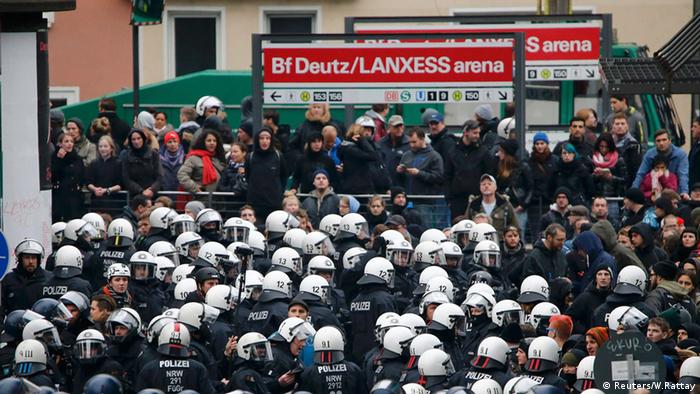 But, this time, HoGeSa and Kögida couldn't even marshal a thousand supporters. Indeed, HoGeSa could barely marshal marshals: before the event began, police required organizers to put forth 50 stewards to maintain order, so the group put forth an open call for people who "ideally weren't intoxicated and didn't have criminal records." Even when the group had met all official requirements, though, its rally appeared to peter more than pop. Fierce-looking young men waited in line behind bored-looking middle-aged men for their turn at the pink portable loos and more than a few looked like they'd rather have spent the Sunday watching football.

Several thousand turned out for the counterdemonstration, getting a free multiband street concert and series of speeches against racism into the bargain. Behind the stage, hundreds of avowed antifascists linked arms in a symbolic gesture to keep right-wingers from breaking the lines and catching up with the HoGeSa and Kögida crowd, though only a few seemed to attempt to. In the long intervals between attempted crossings, the crowd occasionally taunted the police, for example complimenting their hair when they removed their riot helmets. The only pepper spray of the day was, however, deployed on that side of the line, a couple of times, when a few people pushed at the fence or told the police to get out of there, too. There was a quick scatter as dozens of people were hit in retaliation, and the police pushed the water cannon truck a few feet forward into the crowd, but, perhaps chastised by the chant of "we're all peaceful - except you," they rolled it back . 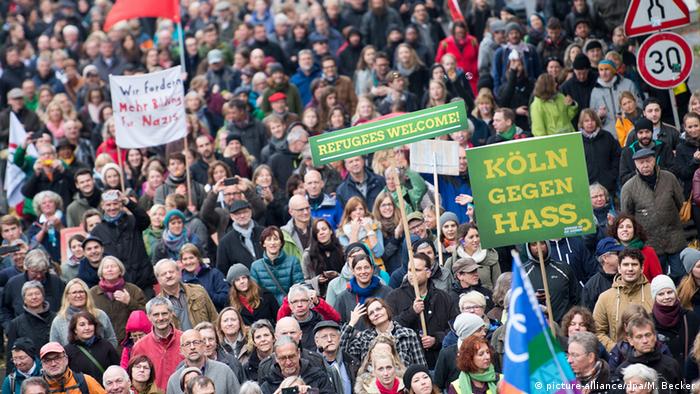 Thousands of Cologne residents came out to protest against racism

Soon after, news circulated that the police would put HoGeSa and Kögida on trains and escort them from the demonstration. The opposing rally had been too big, and even with official protection, the right-wingers weren't going to get through. With that, the crowd returned to its victory chants - "we're all antifascist" among them - as the police removed their helmets and looked set to stand down. Blocks away, an earlier evening set in with the changing of Europe's clocks the night before, but the bands played on as children and their parents and grandparents swayed to the tunes.