Colombia's Marxist ELN rebel group has freed two Dutch journalists it snatched and held captive. The pair were kidnapped near the Venezuelan border four days ago. 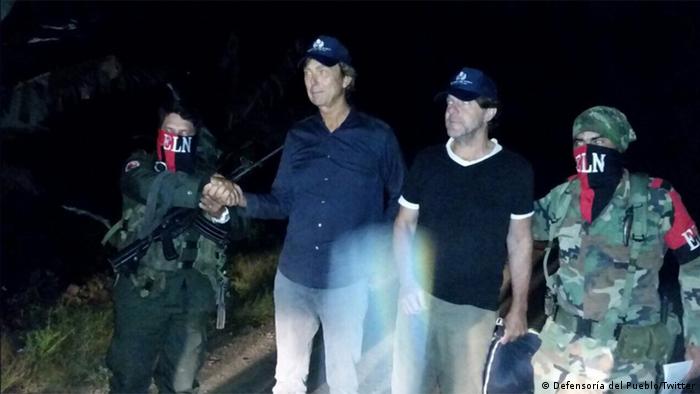 Dutch Foreign Minister Bert Koenders confirmed the news Saturday that two reporters had been freed by the rebel group in Colombia, saying it was "very good news."

The Dutch ambassador has been in contact with both men, the minister added, also thanking the Colombian government for their support.

Colombia's ombudsman office, which deals with human rights issues, wrote in Spanish on Twitter that Bolt and Follender had been freed in a rural area of Norte de Santander state, in the north of the country, near where they had been detained.

Confusion initially surrounded the men's release when Colombia's ELN rebel group said Friday it had released the two men, but later retracted the statement saying it had made an "error" when making the announcement.

"The two foreigners captured by the ELN in Catatumbo have been released in perfect condition," the National Liberation Army (ELN) wrote on Twitter.

The group's radio station, ELN Ranpal, later posted an update on Twitter in Spanish admitting it had made a mistake.

The kidnapping is the latest in a series of incidents which officials fear could disrupt peace talks between the ELN and the Colombian government. The government's chief negotiator with the ELN guerrillas, Juan Camilo Restrepo, warned earlier in the week that the kidnapping could complicate negotiations with the ELN that began in February.

The 2,000-strong ELN frequently kidnaps Colombians and foreigners for ransom and political leverage. The ELN, the second-largest rebel group after the Revolutionary Armed Forces of Colombia (FARC), is in talks with the government to put an end to more than five decades of war.

FARC signed a peace deal last year and is currently demobilizing its guerillas. The group is due to complete its historic disarmament on Friday. UN observers, however, have yet to confirm the formal end to the disarmament process.

More than 220,000 people have been killed in a decades-long conflict that pitted the Colombian military against the FARC, ELN and right-wing paramilitary armies.

The Marxist insurgents have claimed that the journalists "are in good health and will be released." Observers have expressed concerns that the kidnappings could undermine peace talks launched in February. (23.06.2017)