Conservative candidate Ivan Duque has prevailed in Colombia's presidential election with 39 percent of the vote, though he fell short of the margin needed to avoid a runoff. Gustavo Petro landed in second place. 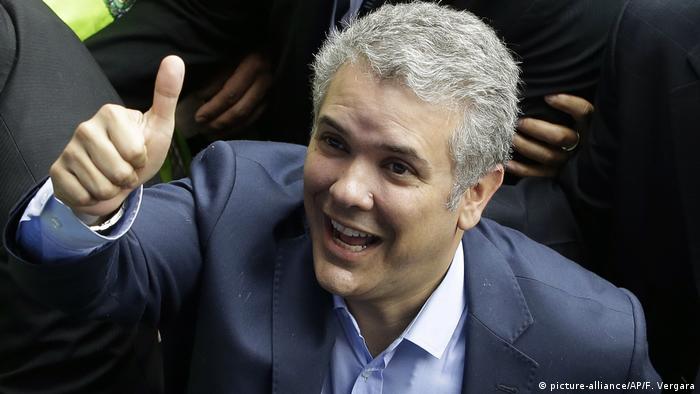 With nearly all precincts reporting, conservative front-runner Ivan Duque has been declared the winner in the first round of Colombia's presidential election.

Duque prevailed over five other candidates on Sunday, garnering 39 percent of the vote. But it wasn't enough to win the contest outright, as he failed to pass the 50 percent mark.

Leftist candidate Gustavo Petro came in second with roughly 25 percent of the vote. In a very close third place was center-left candidate Sergio Fajardo, with nearly 24 percent. The race for second was tight until the very end, but it was ultimately Petro who eked out the win.

Duque and Petro will meet in the runoff contest on June 17.

Voters flooded the polls, with 53 percent of the 36 million Colombians registered to vote turning out on Sunday. It was the highest presidential election turnout in two decades.

The election will be crucial to decide the fate of the nation's 2016 peace deal with the FARC rebels, which saw the end of Latin America's longest-running conflict.

Candidates presented differing views on whether the deal should be maintained as is, or whether it should be changed.

Fight between left and right

Duque, who has close ties to former President Alvaro Uribe, has pledged to rewrite the accord, which he sees as too lenient on a group that waged a decades-long war of terror on Colombia. Critics warn that Duque could turn out to be a puppet of the former president.

Uribe's presence in Colombian politics has loomed large. He openly quarreled with the current president, Juan Manuel Santos, who was once his ally and seen as someone who would carry on his legacy. Instead, Santos opted for peace with the FARC, a break with Uribe's more hard-line approach. Since then, Uribe has maintained his hold on Colombian politics by forming a new party, Centro Democratico, and supporting candidates like Duque. 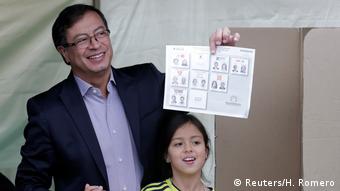 Petro supports the peace deal with the FARC rebels

Gustavo Petro, a leftist former mayor of the country's capital, Bogota, was the second option for Colombian voters in public opinion polls a week before the race. Petro backs the peace deal with the FARC rebels.

Himself a former member of the disbanded M-19 rebel group, Petro caused surprise with his candidacy as Colombian presidential elections have traditionally been dominated by right-wing candidates.

Voters have focused on issues such as corruption and income inequality, which has played in Petro's favor. But many critics have warned that Petro could bring Colombia to a similar fate as Venezuela's leftist regime, which is suffering a severe economic crisis. The ex-guerrilla has responded by distancing himself from Venezuela and labeling its president, Nicolas Maduro, a "murderous dictator."

The upcoming clash between Duque and Petro is set to be contentious, as both candidates stand on opposite sides of nearly every policy issue. While Duque performed well in the countryside with his more traditional base, an area that was hard hit by guerrilla-related violence, Petro won in the poorer coastal sections of the country.

But center-left Fajardo came out ahead in Colombia's influential Bogota district, winning over urban voters. The question will be whether these voters will back Duque or Petro in the runoff, and courting them could influence the candidates' campaign messaging over the next two weeks.

Colombia has opened a new chapter in its history, with a former leftist rebel sworn in as president. Gustavo Petro has pledged to fight inequality, achieve peace and rethink the war on drugs. Colombia's new vice president also represents a new start.