Cologne proposes bike-friendly main drag — to a point | Germany| News and in-depth reporting from Berlin and beyond | DW | 23.10.2017

Cologne's city planners have proposed a pilot program that could alter a major north-south thoroughfare for cars. It's a nod toward cyclists that critics say literally doesn't go far enough. Opened as Cologne's grand boulevard in 1886, the Ring has become the clogged artery that connects the city's north and south to the heart of downtown. Switching names 10 times over 7.5 kilometers (4.5 miles), it's an aggressively hectic roadway that is disorienting for pedestrians, frustrating for drivers and dangerous for cyclists.

On much of the Ring, cyclists get less than a meter (3.3 feet) of designated space. Tires catch on the loose red bricks laid to mark the bike lane or slide over piles of muddy leaves that accumulate year-round in the drippy western city. When it's not blocked by delivery vehicles, the bike lane is crisscrossed by suits on the way to work and parents pushing baby strollers, and at various points stepped into by servers at sidewalk cafes and tourists taking selfies.

Now Cologne's transit office is pledging to do something about that — at least on one heavily trafficked stretch of the Ring between Friesenplatz and Zülpicher Platz that is especially bad for biking. 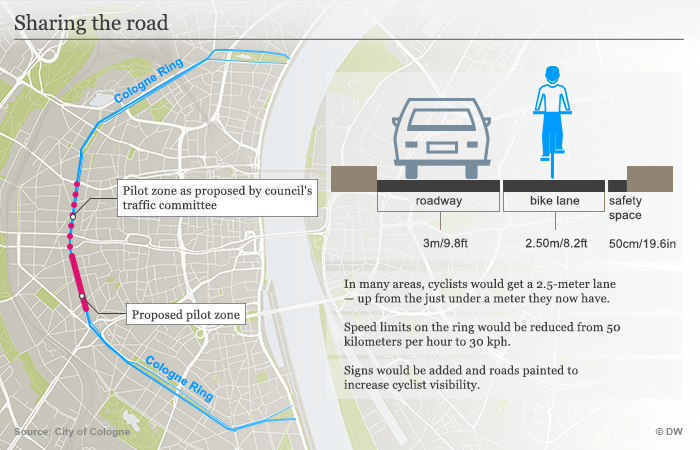 The office has proposed a pilot program to close off one lane of traffic in each direction to cars on a section of the Ring and open it up to cyclists, which would also broaden the sidewalks for pedestrians. Starting in 2018 and likely to last a year or more, cyclists would get 2.5 meters of pavement previously designated for cars and the city would remove 43 parking places and increase the visibility of designated bike lanes with signage and road painting.

"We are seeking measures that can be quickly put into place and in parallel planning the conversion of the entire city," Klaus Harzendorf, who heads Cologne's streets and transit department, said when announcing the program last week.

Cyclists would welcome nearly any improvements in Cologne, which ranked 37th out of 39 German cities in its size category in a poll by the national cycling association. The survey asked respondents 12 questions about cycling in their cities, including the cleanliness of bike lanes, harmonization of traffic signals and parking. Cologne scored especially poorly on lane width and surface material,the amount of obstacles for bikersand the general feeling of security on two wheels.

"It's certainly a step forward," said Reinhold Goss (pictured at top), who founded the #RingFrei initiative to increase the options for nonautomotive mobility on the road. "It's just going way too slowly and hesitantly. You worry that they could go back on it." 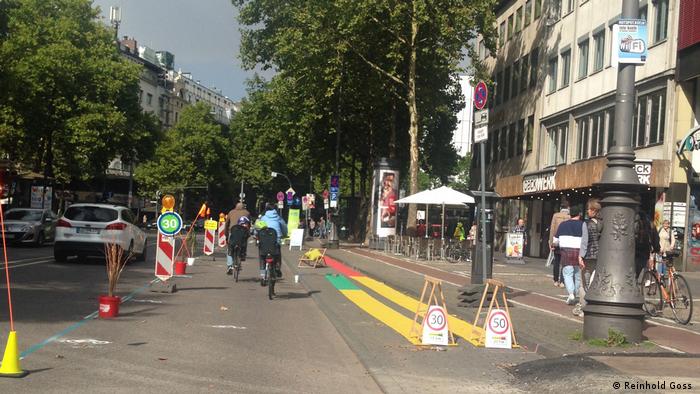 Though the idea received generally uncritical coverage, an article written by Robert Baumanns warned on the front page of the daily newspaper Express that "radical plans will shut drivers out."

In an op-ed, Baumanns accused the administration of "advancing on downtown with a crowbar" with such plans as lowering speed limits and converting some non-Ring roads into cycling streets for two-way two-wheeled traffic, even if that means reducing parking.

Local cycling advocates maintain that the city is still not doing enough to tame the Ring and have called the test zone far too short.

"What's that? Four hundred meters?" Goss said just north of the planned trial area — which officially measures about 350 meters — at an intersection where cars turned right across cyclists and pedestrians filled the bike lanes because drivers clogged the crosswalks.

Goss said the plan was less a pilot program than "an alibi" that allows city planners to say they are making progress on helping Cologne's cyclists, 1,880 of whom were injured last year.

"Public transit is overwhelmed like in all of Europe, so they're trying to get people to walk or bike for short trips, but you have to offer the infrastructure," Goss said.

Comprising the Greens, Social Democrats and Left party, a majority on the city council's transit committee suggested that planners lengthen the pilot program's zone 600 meters to Friesenplatz, which would cover the entirety of one of the most trafficked sections of the Ring. The committee's center-right parties, the Christian Democrats and liberal Free Democrats, oppose extending the proposal. The committee will next debate the issue on December 5 before it moves to the full council for a vote.

Goss said there was no reason for cycle-safety measures to be so controversial.