Cologne: A day on the Domplatte

Tourist magnet, stage, workplace: Cologne's Domplatte - the space around Cologne Cathedral - is an intriguing microcosm for both natives and visitors from around the world. 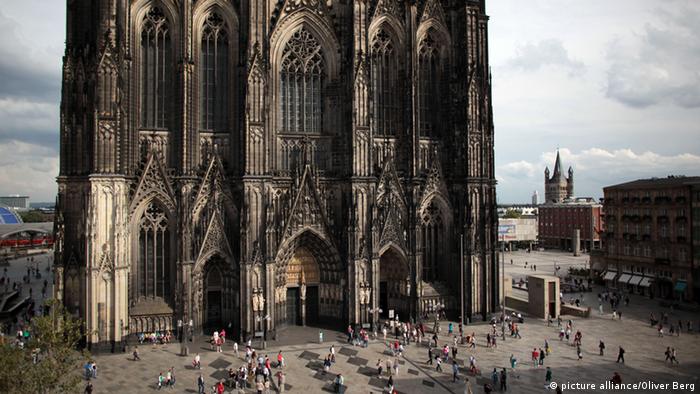 The drizzle's finally stopped. The granite plates in front of Cologne Cathedral look like they were freshly glazed. And the first tourists begin peeking out from under their umbrellas. Hardly any know they're on the Domplatte. It's a sightseeing attraction - but only at second glance, always in the shadow of the mighty cathedral that draws millions of visitors a year.

But the 7000 square meter pedestrian zone surrounding the church is a popular place nonetheless. Even in wet weather, like on this Saturday, hordes of visitors gladly pose on the big open stairs that connect Cologne's main station with the more elevated Domplatte. Indonesian students, Japanese package tourists, Russian honeymooners - they all want a memento photo with the cathedral. The giant structure is best framed from below.

"What's that?" asks Shivani Monga, a travel blogger from India. She heads straight for a musician with a crocheted reggae cap: Even before he looks up, she's aready shot pictures of his steel pan - a musical instrument from Trinidad and Tobago. But the artist has no time for small talk, he's fully absorbed in the music. The Domplatte is his workplace, and he earns a decent living with his Caribbean feel-good sounds - even on rainy days. 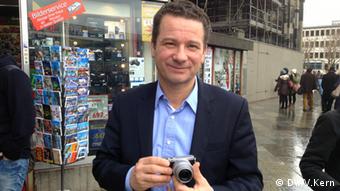 Frank Lambertin has a foto shop right on the square

"The Domplatte is the heart of Cologne," declares Frank Lambertin. For 25 years he's been running a foto shop right on the north side of the cathedral square, selling souvenirs and postcards along with cameras. Lambertin knows the Domplatte from the old days, when it was still associated with "bad-smelling dirty corners" and "harassing rose vendors."

The city of Cologne has been fighting this image for several years now. In 2005 it replaced the contorted construction of escalators and deep tunnels with a generous open staircase. "Now it's much more open and friendly," Frank Lambertin says approvingly. The complex concrete construction on the cathedral's east side is also marked for demolition to give way to a lighter structure. The project is still in progress.

That's although the Domplatte is relatively young. It was completed in 1971 according to plans by architect Fritz Schaller. Before that, seven lanes of traffic roared right in front of the cathedral. Today the cars drive through a tunnel underneath the Domplatte. It also forms a connection between the city center and the small hill on which the cathedral stands. Thanks to the Domplatte one can now reach Hohe Strasse, a popular shopping boulevard, barrier-free.

"Shabby but cute" is how Shivani Monga describes the Domplatte, despite the renovation work. Two sisters from the Philippines praise how clean and safe it is here, in spite of the crowds. 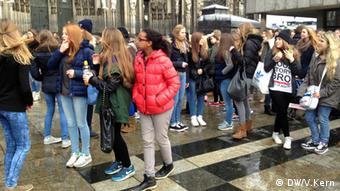 At noon the cathedral bells ring out, and the sun breaks through for a moment. On the huge space of the southern Domplatte, Cologne "immigrant" Susanne Brock pulls the zipper on her outdoor jacket higher. "No matter the season, it's always windy here," says Brock, who's lived in Cologne for the past 12 years. A love-hate relationship would be the best way to describe her feelings toward the Domplatte. For the first five years she didn't dare use the giant parking garage underneath the Domplatte either, because it was too spooky.

But she's come to appreciate this quirky space. "Where's the Wailing Wall now?" she asks, referring to the controversial Cologne initiative that sprang up in the 1980s, first casting a light on the city's lack of housing, then organized antiwar demonstrations and took sides in the Israeli-Palestinian conflict. But on this overcast afternoon we see neither banners nor demonstrating citizens.

Instead, hundreds of teenagers have been gathering, loudly, around the cathedral’s south tower. They're here for a fan meeting. Two beauty bloggers are expected to give autographs. Proud selfies are taken in memory of the big event. TV cameras are there too - because the Domplatte is nothing if not a stage, for stars and those who want to be them. 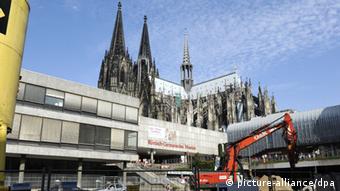 Construction work next to the cathedral

Only a few steps further east, toward the Rhine, the teeny-shrieking fades and only a few pigeons are around, searching for a snack. Those on the Domplatte's east side are not looking for excitement. This is where the Domplatte gives way to the Roman-Germanic Museum and the Museum Ludwig for modern and contemporary art.

In the early afternoon the drizzle returns. But that doesn't bother the Domplatte and its people. They don't need any sunshine for their microcosm. At once rough and charming, the Domplatte benefits from its location: Right at the cathedral and therefore amid everything. Frank Lambertin in his foto shop has long known that "the Domplatte is a place real Cologners love." And that love is unaffected by either wind or dirty corners.

Lovers of German history have new reason to rejoice: five of the country's top historic attractions in North Rhine Westphalia can now be visited online, thanks to a high resolution 360 degree imagery project. (24.02.2015)

For DW host Katty Salie, Carnival in Cologne means dressing up, dancing and singing for six days straight. She shares some hints for getting the most out of the festivities. Alaaf! (27.02.2014)

City on the Rhine: Follow our tour through Cologne, starting inside its famous cathedral

Three travel tips: Follow a local to his favorite spots in Cologne