A public prosecutor in France has said the co-pilot of the crashed Germanwings flight deliberately initiated the plane's descent. He was alone in the cockpit and ignored the pilot trying to get back in. 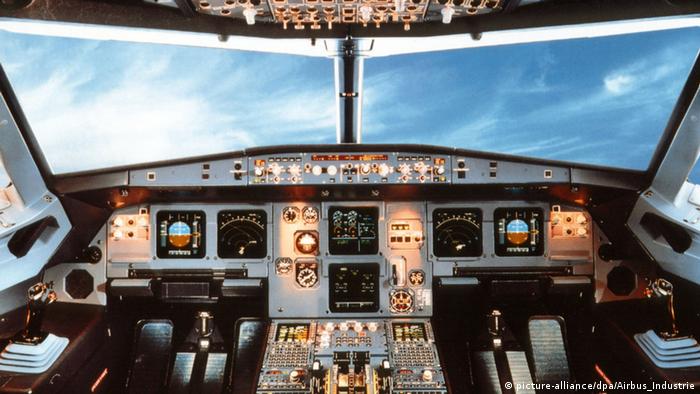 At a press conference in Marignane, France, on Thursday, Marseille's public prosecutor, Brice Robin, said investigators analyzing the audio recorded in the cockpit of the Germanwings plane that crashed on Tuesday have come to the conclusion that the co-pilot "deliberately initiated the destruction of the plane."

The 28-year-old co-pilot of flight 4U 9525, which left Barcelona on Tuesday headed for Düsseldorf, has been identified as Andreas Lubitz, a German national from Montabaur, Germany. He began flying with Germanwings in September, 2013 and had logged 630 hours as a co-pilot.

In describing the events that investigators had pieced together from the audio recording, Robin said the pilots conversed in a normal manner for the first 20 minutes of the flight. Upon reaching a normal cruising altitude, the pilot asked the co-pilot to take over the controls before getting up and leaving the cockpit, most likely to use the restroom.

At this point, Robin said, the co-pilot deliberately initiated a descent of the airplane.

Shortly after, the pilot repeatedly attempted to communicate via the plane's telephone system that he'd like to be let back in. The co-pilot did not respond. The pilot then tried knocking on the door, but there was no reaction from the cockpit.

Robin said the co-pilot did not utter a single word during the eight-minute descent before the crash, but could be heard breathing normally.

Flight controllers in Marseille attempted to contact the plane because of the unscheduled descent, but the co-pilot did not react.

Eventually, as the plane neared the ground, the automatic ground proximity alarm sounded, but there was no reaction by the co-pilot. The pilot's efforts to break through the door were audible. Prosecutor Robin said there was no indication the passengers knew what was happening until immediately before impact, when screams could be heard from the back of the plane.

In his press conference, Robin was asked about what options the pilot would have had to get back inside the cockpit when he received no response from the co-pilot. Robin responded that had any options been available to the pilot, he would have used them, as he would have realized at some point what was going on. It is believed at this stage that the co-pilot deliberately did not let the pilot back into the cockpit.

Prosecutor Robin said that there was currently no reason to treat the crash as an act of terrorism. Speaking shortly after Robin's press conference, German Interior Minister Thomas de Maiziere said there was no indication from German security and police databanks that the co-pilot had any kind of terrorist background.

On the subject of the co-pilot's possible motives, Robin only said that the 28-year-old's actions seemed to fit with "a desire to destroy" the plane, without speculating on why.

"The most plausible interpretation, the most credible for us is that the co-pilot, by a voluntary decision not to act, refused to open the door of the cockpit to the commander on board, and pressed the button to initiate a drop in altitude," Robin said.

The pilot was a 10-year veteran at that rank, flying for Germanwings since 2014 and previously flying for Condor and Lufthansa. He had over 6,000 recorded flight hours.

The crash claimed the lives of 144 passengers and six crew members. According to Germanwings, 72 of the victims were German citizens. The Spanish government has said 50 of its citizens were on board.

French authorities have begun removing human remains from the crash site. This is expected to take some time.

Family and friends of the victims had been flown by Lufthansa on Thursday morning to Marseille, where a visit to the crash site was arranged. Robin said the families had been informed about the investigators' findings prior to him releasing the information publicly.