Clothing brands agree to look into mass faintings in Cambodia | Asia | An in-depth look at news from across the continent | DW | 08.09.2011

Clothing brands agree to look into mass faintings in Cambodia

Some of the world's leading clothing brands have pledged to look into a series of mass faintings at garment factories in Cambodia, where the working conditions are notoriously bad. 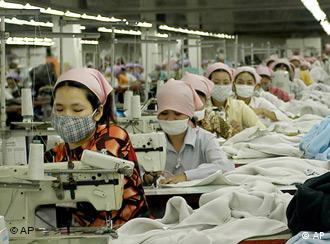 The average monthly wage in Cambodian garment factories is 61 dollars

Cambodia is home to some 300 factories where clothing for export is manufactured. They supply major global brands such as Gap, H&M, Wal-Mart and Puma.

The working conditions are notoriously bad for the country's 300,000 garment workers, who are mostly women. They often sit in their thousands at sewing machines in massive halls where the air is poor. They work for 10 to 12 hours a day, six days a week and there are very few breaks. Their job is to produce T-shirts, dresses or pants that end up on the racks of clothing stores all over the world. 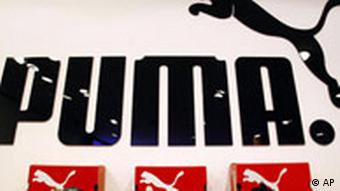 Puma's suppliers have also been criticized for poor conditions

Last month, there was a mass fainting episode at a Chinese-run factory that supplies knitwear to the Swedish retailer H&M. "My fingers and toes were suddenly very cold and it smelt very bad, of chemicals" a 19-year-old worker explains. She saw that people around her were unconscious and she herself could not move her fingers or toes at all. Nearly 300 of her colleagues wound up in hospital.

It was the latest in a series of mass faintings this year, which have been blamed on bad ventilation or exposure to dangerous chemicals, as well as the poor general health of the workers.

Considering many employees in such factories sleep on the ground in crowded bamboo huts, and rarely eat more than a portion of rice it is hardly surprising that their health suffers. Moreover, they often have to work overtime so that they can make the average monthly wage of 61 dollars. 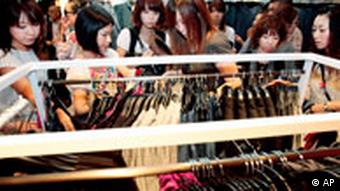 H&M's cheap clothes are popular all over Asia

A few hundred miles away in Singapore, the first H&M branch has just opened. There are long queues of excited shoppers, eager to get their hands on cheap fashion items. "We love H&M!" say two young girls. "The clothes are great and so cheap!"

Another shopper says he does not know why the clothes are so cheap but he has no problem buying them at a low cost if that’s the price on the tag.

The labels say clearly that the clothes were made in Cambodia but no explicit connection is made to the working conditions in the garment factories. Lex Keijser, H&M's country manager in Singapore, fends off criticism of the suppliers saying that "they follow the respective laws of their countries. If something goes wrong we look into the matter."

With so many mass fainting incidents this year, something has gone seriously wrong. This is perhaps why over two dozen brands have finally agreed to provide resources and international expertise "to look into the matter."

The Cambodian government has also set up an inter-ministerial task force to address the issue. The garment industry is a key source of foreign income in Cambodia.

Rising cotton prices have hit India's garment industry. In the textile hub of Tirupur, matters have been compounded by a recent court order shutting down fabric-dyeing units. (13.04.2011)

In Germany there are a whole variety of discount stores where cheap clothes can be bought. T-shirts or trousers might cost as little as two euros. This is great for low-income families. But there is a downside. (10.11.2010)