Clinton: We have to 'save capitalism from itself'

It was a substantive debate focusing on income inequality. Bernie Sanders has pushed the Democrats' presidential nomination debate to the left, but Hillary Clinton showed that she won't be relinquishing her lead soon. 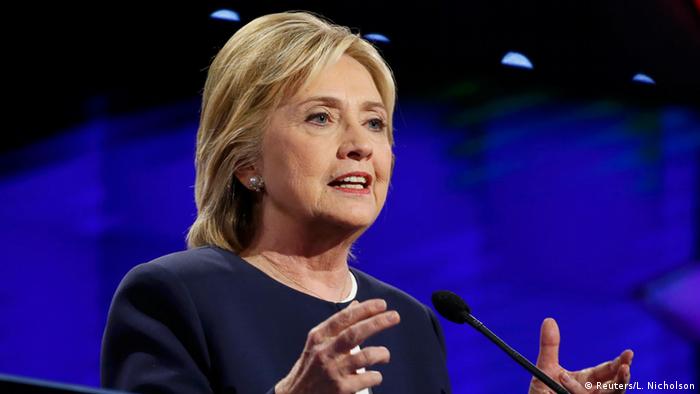 It was a strange moment in American politics. Five presidential candidates were asked during a nationally televised debate on Tuesday whether they were capitalists. The answer is normally taken for granted in the United States.

Bernie Sanders, an independent senator from Vermont, has shaken up the Democratic primary and rattled American political conventions. The self-declared democratic socialist has made significant gains against Hillary Clinton in early primary states and in the third quarter raised nearly as much money without the support big donors - $25 million (21.9 million euros) compared to Clinton's $28 million.

"There is a mood this year in the electorate of a rejection of standard political discourse and standard political candidates," Alan Schroeder, author of "Presidential Debates: 50 years of High Risk TV," told DW. "Bernie Sanders has this message that's resonating with a lot of people."

His message is about income inequality and the system that produces it. Sanders has railed against the "billionaire class" and calls the campaign finance system "corrupt." The senator points to Scandinavian countries, with their generous social welfare states, as role models for the United States.

While it might be the year of the political outsider, the establishment will only move so far: "We are not Denmark," Clinton said during an exchange with Sanders over the merits of capitalism. "We are the United States of America."

But Sanders has succeeded in pushing the debate to the left. Clinton agreed that something has gone wrong in America's economic system, that capitalism has "run amok" and created inequities. According to Clinton, the next president must "save capitalism from itself." 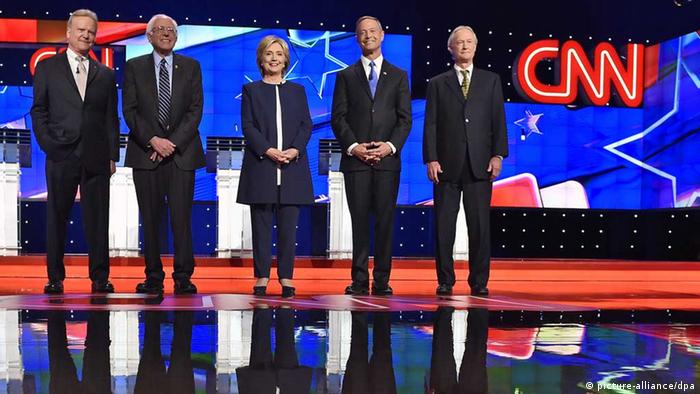 Clinton and Sanders are leading in the polls, with the remaining three - (L-R) Jim Webb, Martin O'Malley and Lincoln Chafee - barely reaching 1 percent

'Quagmire in a quagmire'

Though Sanders has become a political force, it's still Clinton's nomination to lose. According to Schroeder, she has all of the advantages of an establishment candidate - the support of well-heeled donors, name recognition, the experience of running for president and her service as secretary of state.

But Clinton has her share of weaknesses. A question about Russian President Vladimir Putin's intervention in Syria quickly turned into a debate about her support for the 2003 invasion of Iraq. It's the vote that cost Clinton the presidential nomination in 2008 to Barack Obama.

"Leading us into Iraq under false pretenses and telling us, as a people, that there were weapons of mass destruction there was one of the worst blunders in modern American history," said Democratic nominee candidate Martin O'Malley, the progressive former governor of Maryland.

Clinton has remained more hawkish on foreign policy than her primary opponents. She has supported establishing a no-fly zone over Syria. Sanders called the Syrian civil war "a quagmire in a quagmire" and vowed to keep the United States from becoming more deeply involved.

While Clinton was criticized for her voting record on Iraq, Sanders had to defend his mixed record on gun control. The issue has become increasingly important in the Democratic Party, particularly in the aftermath of the mass shooting in Oregon.

In the 1990s, Sanders voted five times against legislation that would have expanded the waiting period to buy a firearm. He also voted to give firearms companies immunity from lawsuits.

Calling the issue of gun control a complicated topic, the Vermont senator said he supports background checks and voted for a ban on assault weapons, but he comes from a rural state where there's little gun control.

"I was in the Senate at the same time," Clinton countered after Sanders explained his position. "It wasn't that complicated to me. It was pretty straightforward to me that he was going to give immunity to the only industry in America." 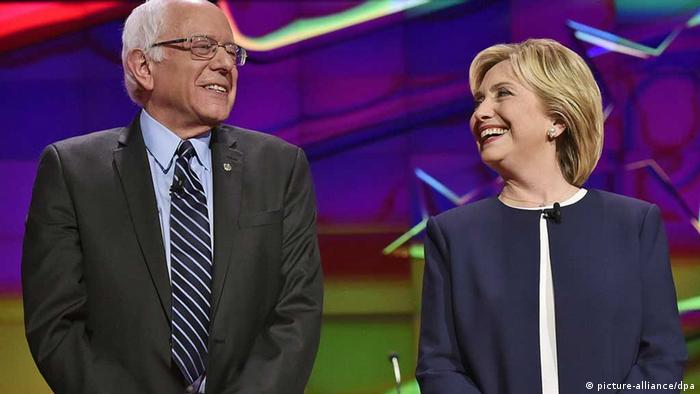 In a rare moment of unity, Sanders halted talk of the Clinton e-mail scandal, saying Americans were "sick" of hearing about it

The most important issue in presidential politics is voter trust, according to Bruce Newman, author of "The Marketing Revolution Politics."

Polling has indicated that a majority of Americans don't think Clinton is trustworthy amid a scandal over the use of her private email address to conduct official business as secretary of state. At the end of the day, her position on the issues will likely be more important.

"The voters are asking themselves 'do I really care if she's not completely honest if she can change my personal life and make my situation better,'" Newman told DW.

Throughout the debate, no candidate was substantially able to weaken Clinton, according to Newman. O'Malley performed well and he's respected in the Democratic Party for his progressive record in Maryland, but he barely registers in opinion polls.

Senator Jim Webb of Virginia, a Vietnam veteran, is a conservative Democrat who's done little campaigning. Lincoln Chafee, the former governor of Rhode Island, was once a Republican and has changed his political affiliation three times.

"Nobody even came close to touching or putting any kind of chink in the armor in Hillary Clinton's lead," Newman said. "She made it very clear tonight that she's the only serious viable candidate."