A Moroccan man who was cleared in a Hamburg court of helping the Sept. 11, 2001 suicide hijackers said he wants to sue German authorities for preventing him from finishing his studies. 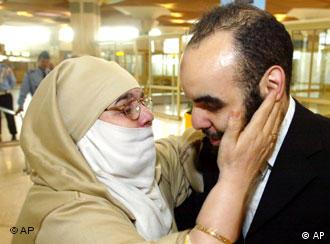 Mzoudi, back home in Morocco, says Germany robbed him of his future

Abdelghani Mzoudi's ordeal is behind him now, but the former electrical engineering student wants compensation from the German state as he was not able to finish his studies. A German federal court confirmed Mzoudi's acquittal this month, but city authorities maintained that he was a threat, and gave him two weeks to leave the country.

Mzoudi, who was a friend of Sept. 11 plot leader Mohamed Atta, is now back in his native country, Morocco.

"It was a tough experience," he told Reuters. "Instead of apologizing after they found out I was innocent, German authorities expelled me." 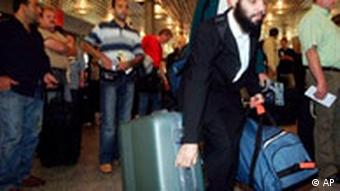 Moroccan Abdelghani Mzoudi, second right, stands with his suitcase in a row of unidentified passengers in front of a check-in counter at the airport Hanover-Langenhagen, Germany, on early Tuesday June 21, 2005.

"When my lawyer was here was talked about the possibility of suing German authorities and we will do it because they did not authoize me to finish my studies one year before graduation," Mzoudi said in an interview with the news agency.

The 32-year-old arrived in Germany in 1993 to study electrical engineering in Hamburg, but was arrested in October 2002 on suspicion that he and fellow Moroccan, Mounir El Motassadeq, provided logistical support to Atta and other members of the Hamburg al Qaeda cell.

On Sunday, a senator in the city state of Hamburg responded angrily to news of Mzoudi's plans to sue the German state.

It was not Germany which robbed Mzoudi of his future prospects, Senator Udo Nagel told Focus news magazine.

"He destroyed these himself through his activities in the Islamist scene," Nagel said.

Motassadeq is still in Germany for a retrial after his conviction for aiding the hijackers was overturned. He lost an appeal earlier in the week to stay in the country to finish his university studies. German authorities have said that he, too, will be expelled if he is acquitted.

The Trouble With Nailing Terror Suspects

Another terror trial without a hard conviction this week has illustrated once more the difficulties the German judiciary has in putting terror suspects behind bars. But some experts say prosecutors are learning. (April 8, 2005)

Germany’s Federal Appeals Court on Thursday upheld alower court's acquittal of Abdelghani Mzoudi, who was accused of involvement in the Sept. 11 attacks on the United States. (June 9, 2005)

Germany, US Call for Closer Cooperation on Terrorism

Germany and the US say better cooperation is needed to fight terrorism, but while Germany is advocating a "clearing house" to exchange information, the US says that idea won't work. (Sept. 17, 2004)