Despite claims from officials that the security situation has improved, explosions and gunfire were heard across Bujumbura before Burundi's presidential election. Observers have decried the poll as neither free nor fair. 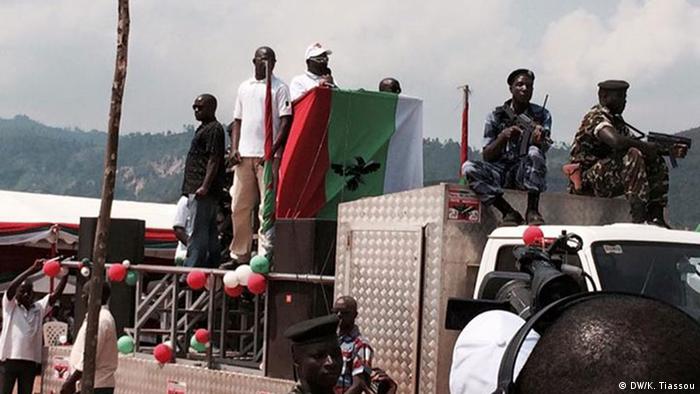 Gunfire and explosions could be heard late Monday in Burundi's capital, Bujumbura, on the eve of the country's presidential election.

The unrest comes amid tensions over incumbent President Pierre Nkurunziza's controversial bid for a third term over objections by protesters and opposition politicians, who say he is flouting a constitutional ban.

Witnesses in the capital's northern Ngagara suburb said assailants had shot at police officers, who returned fire, while journalists from French news agency AFP heard three loud explosions and regular bursts of gunfire, though they could not say where the sounds were coming from. Explosions and shots were also heard in Nyakabiga, northeast of Bujumbura, and Kanyosha to the south, according to local residents.

Earlier on Monday, an unknown attacker threw a grenade in the city's central Independence Square.

It remained unclear if there were any casualties.

Prosper Ntahorwamiye, spokesman for the Electoral Commission, said he expected high turnout among the country's 3.8 million eligible voters. He said improved safety, especially in the capital, has encouraged those who fled the violence of the past months to return.

The UN Refugee Agency, however, has announced that it has not seen any of the 170,000 Burundians who left their homes for fear of election-related turmoil return to the country.

The European Union suspended its election observer mission to the landlocked African nation in May, citing concerns over a clampdown on independent media, excessive use of force against protesters and the government's intimidation tactics against political and civic opponents.

During the country's recent parliamentary elections, in which Nkurunziza's ruling party won a majority of the seats, the United Nations observer mission to Burundi said that the polls were not free, credible or inclusive.

Sporadic street violence has erupted in Bujumbura since Nkurunziza announced his intentions to run for a third time in April. Protesters saw this as a violation of the constitution, which sets a two-term limit. Nkurunziza argued that he was appointed by the parliament, not elected, for his first time in 2005, and is thus eligible to be elected once more.

An attempted coup in mid-May was quickly quashed by forces loyal to the president. More than 100 people have died in clashes.

Of the original eight candidates for president, three, among them two former presidents, have withdrawn their candidacy amid growing concern that the poll will be neither free nor fair. Burundi's Electoral Commission has denied receiving their requests.

Government representatives have failed to meet with opposition leaders for talks on resolving the violent crisis in Burundi. With a highly disputed election fast approaching, President Nkurunziza seems set for victory. (19.07.2015)