Clashes in Burundi as African leaders meet in Tanzania

African leaders are hoping to broker a deal to end weeks of protest in Burundi over the president's bid for a third term. Protest organizers want African leaders to demand that Pierre Nkurunziza not run again. 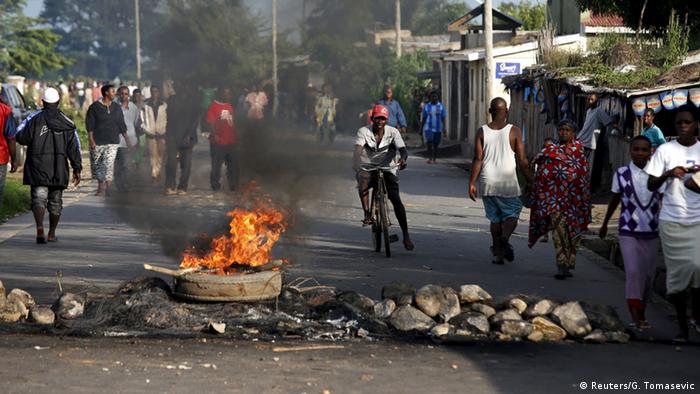 World leaders have pressured Nkurunziza, a former rebel from Burundi's Hutu majority, to withdraw from the election. Clashes between security forces and demonstrators have raised fears of a return to violence in Burundi, which has yet to fully recover from a brutal 13-year civil war that ended in 2006.

Protesters took to the streets again Wednesday in Burundi. Though the police - who have used water cannon, tear gas and brute force to disperse protesters - have ripped down barricades on main roads, side streets in key opposition areas remain blocked, guarded by resilient demonstrators. Protesters say the police have fired live rounds at them, though officials deny this.

The EU, US and African Union have all called on Burundi to delay the election. Opposition leaders say Nkurunziza's bid violates the two-term limit in the constitution and the deal that ended the civil war.

"We expect the East African heads of state to tell President Nkurunziza that the constitution of Burundi and the Arusha peace agreement do not allow him to run for a third term," Pacifique Nininahazwe, a civil society activist and protest leader, told the news agency Reuters on Wednesday.

A court ruled that Nkurunziza could run again because the legislature - not the electorate - installed him for his first term, in 2005. Protesters - and at least one justice - say that the ruling party had manipulated the court.

Fifty thousand people have fled, about half for Rwanda, many of them Tutsis who feel threatened by the youth wing of Nkurunziza's party, though the faction denies any threats against specific ethnic groups. According to the UN refugee agency, up to 300,000 people could flee, some to other parts of Burundi and others abroad. That would mean the displacement of about 3 percent of the 10 million-strong population in one of Africa's most crowded nations.