CIA interrogators to escape prosecution for alleged torture | World | Breaking news and perspectives from around the globe | DW | 17.04.2009

Intelligence officials who used harsh interrogation techniques against terrorism suspects during the Bush administration will not be prosecuted, US President Barack Obama said Thursday. 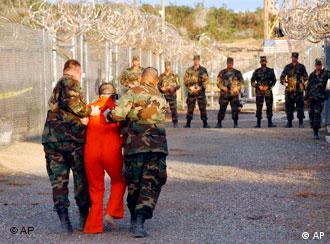 Many detainees at Guantanamo and elsewhere came in for rough treatment

CIA operatives were following the legal advice of the Justice Department and should not be held responsible, Obama said.

"We have been through a dark and painful chapter in our history," Obama said in a statement. "But at a time of great challenges and disturbing disunity, nothing will be gained by spending our time and energy laying blame for the past."

The White House also released several memos drafted under the Bush administration that provided legal justification for the harsh interrogation methods. Techniques outlined in the memos include sleep deprivation, slamming detainees into walls, stripping them naked, and submitting them to waterboarding, a technique used to simulate drowning that human rights groups say amounts to torture.

The CIA had previously acknowledged the waterboarding of three terrorism suspects, including Khalid Sheikh Mohammed, the alleged mastermind of the September 11, 2001, terrorist attacks.

Obama emphasized that, in one of his first acts as president, he had already prohibited the use of such techniques, saying they "undermine our moral authority, and do not make us safer."

But as he released these memos, Obama said he wished to "assure those who carried out their duties relying in good faith upon legal advice from the Department of Justice that they will not be subject to prosecution."

Civil rights group ACLU welcomed the release but said it still wanted an independent prosecutor to investigate allegations of torture during the Bush administration.

"We have to look back before we can move forward as a nation," said Anthony Romero, executive director of the ACLU. "When crimes have been committed, the American legal system demands accountability."