Chronology: The deadliest earthquakes worldwide | News and current affairs from Germany and around the world | DW | 12.05.2011

The massive earthquake in Japan is one of the worst in the last 30 years. DW-WORLD has compiled a list of devastating earthquakes worldwide since 1976. 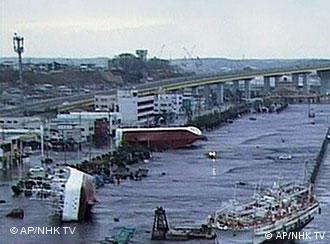 The tsunami was the biggest cause for concern in Japan

March 11, 2011 - eastern Japan: While Japan is relatively well-prepared when it comes to earthquakes, the tsunami that followed the magnitude 8.9 earthquake 130 kilometers (81 miles) east of Sendai caused extensive damage on the country's eastern seaboard. The 10-meter (33-foot) high waves that swept over Japan after the quake triggered tsunami warnings for much of the Pacific Rim.

February 27, 2010 - Concepcion, Chile: Just a few weeks after the major earthquake that devastated Haiti in January 2010, Chile was hit by a magnitude 8.8 earthquake. While the damage from the quake that struck in the early hours of a Saturday morning wasn't as extensive as in Haiti, hundreds of buildings were destroyed in the city of Concepcion and damage was also reported in the capital, Santiago. Over 700 people lost their lives.

January 12, 2010 - Haiti: The magnitude 7 earthquake that struck Haiti sparked an ongoing humanitarian crisis. Estimates placed the death toll at over 200,000, with well over a million people left homeless. In the days following the quake, the United Nations called it the worst disaster it had ever faced. 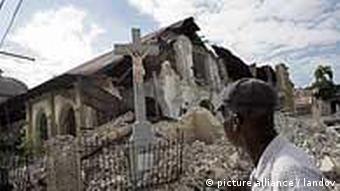 The damage in Haiti was extensive in January 2010

October 8, 2005 - northern Pakistan: Centered in the disputed province of Kashmir - about 100 kilometers north of Islamabad - a quake measuring at least magnitude 7.6 claimed at least 19,000 lives throughout south Asia. The impact of the quake was felt in parts of Pakistan, India and Afghanistan. Although earthquakes are nothing new to the country, it was one of the worst in the country's recent history. The last earthquake on such a massive scale struck in May 1935 and claimed 60,000 victims as the city of Quetta was nearly completely destroyed.

December 26, 2004 - southeast Asia: An earthquake measuring magnitude 8.9 struck the northern tip of the Sumatra island in Indonesia, triggering massive coastal floods and killing thousands of people in Indonesia, Malaysia, Thailand, India and Sri Lanka. Some 225,000 people were killed, including many Western tourists. The relief efforts and humanitarian aid were some of the most extensive in history.

December 26, 2003 - Bam, Iran: At least 31,884 people died and 18,000 were injured in an earthquake that flattened the ancient Iranian city of Bam. The quake registered a magnitude of 6.7. Despite political tensions with the Islamic Republic, Western world leaders rush supplies and financial aid to Tehran. 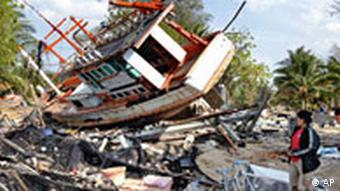 The coast in southern Thailand was devasted in December 2004

January 26, 2001 - Gujarat, western India: The state of Gujarat was hit by a magnitude 7.9 earthquake. Official reports claimed more than 20,000 people were killed and 160,000 injured, but aid organizations estimated the number of victims to be closer to 50,000.

August 17, 1999 - northwestern Turkey: In one of the worst earthquakes (magnitude 7.4) to ever strike the country, some 17,840 people died and nearly 25,000 were injured in the region around Izmit. Numerous high-rises, built quickly and cheaply, collapses in the city, launching a major investigation into country-wide construction practices.

January 17, 1995 - Kobe-Osaka region of central Japan: The island Honshu was hit by a magnitude 7.2 earthquake. Some 6,400 were reported dead, with the majority of the destruction in the city of Kobe. Damages hit an all-time high at up to $100 billion (72.5 billion euros). 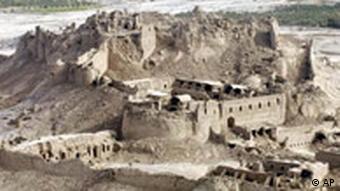 June 21, 1990 - northwestern Iran: In the country's worst earthquake in a century (magnitude 7.7), more than 50,000 people died in Ghilan and Zandjan provinces.

December 7, 1988 - northwest Armenia: Some 25,000 died in the then-Soviet controlled state after an earthquake of magnitude 7 struck the cities of Spitak and Leninakan, today's Gumairi.

September 19, 1985 - Mexico City: Despite the relatively far-removed epicenter, at least 10,000 were killed in the Mexican capital when a quake of magnitude 8.1 struck in the central Mexican provinces.

DW-WORLD looks at some of the stories that unfolded in the aftermath of the underwater earthquake in southeast Asia on December 26, 2004. (03.01.2005)

Training to deal with crisis

German rescue specialists reacted swiftly to Iran's earthquake and offered expertise on the ground, thanks in part to Germany’s "Academy for Crisis Management" that trains workers to deal with the worst. (29.12.2003)

Country of the dead

International relief efforts get underway after a series of earthquakes shook Afghanistan. Officials say well over 2,000 people have died, thousands are injured. But the numbers could be much higher. (27.13.2002)