Chronology of the Orange Revolution | Europe | News and current affairs from around the continent | DW | 01.10.2007

Nearly two years ago followers of Ukrainian opposition leader Yushchenko took to the streets in Kiev dressed in orange to protest results showing Prime Minister Yanukovich in the lead. The Orange Revolution was born. 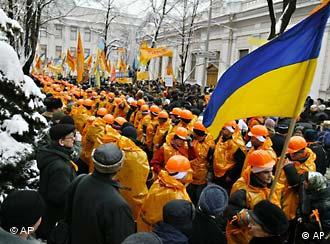 Yushchenko's supporters in orange helmets in front of the parliament in Kyiv in Dec. 2004

In the months following the first protests, the Ukrainian government was ousted and then reinstalled. New elections were called and a dispute broke out among the newly elected leaders. This chronology of the roller-coaster events since Nov. 22, 2004 puts the Orange Revolution in perspective.

Nov. 22, 2004 – Supporters of opposition leader Viktor Yushchenko demonstrate in the capital Kyiv dressed in orange. They protest results showing pro-Russian Prime Minister Viktor Yanukovych in the lead after a second round of a poll to decide who would succeed veteran President Leonid Kuchma. Cries of a rigged election go out from the protestors, and European leaders apply pressure on Kuchma to call for a new vote.

Dec. 3 – The Ukrainian Supreme Court rules the vote invalid and orders a second round re-run on Dec. 26 after the parliament votes to disband Yanukovich’s government.

Dec. 28 – Yushchenko wins the election with 51.99 percent. The Supreme Court rejects Yanukovych’s complaints or irregularities and he resigns as prime minister on New Year’s Eve.

Jan. 23, 2005 – Yushchenko is sworn in as president. Days later, Yulia Tymoshenko is approved by parliament as prime minister.

Sept. 8 – Yushchenko calls for Tymoshenko to step down after prolonged infighting and the resignation of two top officials. Yuri Yekhanurov, a loyal presidential ally, takes her place.

Jan. 10, 2006 – Parliament votes to sack the Yushchenko government over a gas deal with Russia which sharply raised the cost of imports.

March 26 – Yanukovych’s Regions Party, more sympathetic to Moscow, leads parliamentary elections with 186 of 450 seats, but is outnumbered by the combined “orange” tally of 243 seats. Tymoshenko’s bloc garnered the top number of seats among the “orange” group.

June 15 – Yushchenko’s allies begin exploring the chances of forming a coalition with the opposition after 80 days of talks fail to produce a government.

July 6 – Parliament, all but incapacitated since March, resumes its duties and elects socialist Oleksander Moroz, previously an “orange” supporter, as speaker. He is backed by the Yanukovych’s Regions Party. The move jeopardizes a possible “orange” coalition.

July 18 – A new ruling coalition, made up of the president’s opponents, proposes Yanukovych as premier.

July 27 – Yushchenko summons a round table of parliamentary leaders to find a compromise solution to political deadlock.

Aug. 3 – Yanukovych is set to be approved as prime minister after signing a pledge not to reverse his predecessor’s pro-Western policies.

Jan. 12, 2007 – Yushchenko’s rivals pass legislation to reduce the premier’s control over government. It is a heavy blow to Yushchenko’s authority. He vetoes the law twice, but it later comes into effect.

March 13 – The opposition storms out of parliament to back its demand that Ukraine stick to a pro-Western course.

April 2 – Yushchenko signs a decree dissolving the parliament and ordering elections for May. Yanukovich and his allies challenge the decree in the Constitutional Court.

May 27 – After weeks of negotiation, Yushchenko sets Sept. 30 as a date for early parliamentary elections.