Christianity becomes the religion of the Roman Empire - February 27, 380

The decree of the Eastern Roman Emperor Theodosius I had far-reaching consequences: It bound the Judeo-Christian roots of the European continent to Greco-Roman culture. 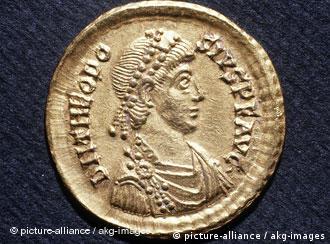 A coin showing Theodosius I

Until the Council of Nicaea in 325, Christians were persecuted, churches set ablaze and their wealth confiscated. The persecution of Christians peaked under the rule of Emperor Diocletian (ca. 245 - 316). He wanted to revive old pagan cults and make them into a kind of state religion. But his anti-Christian policies failed and were revoked under one of his successors, Emperor Constantine I (ca. 285 - 337).

In the Roman Empire, the military and administrative arms were functioning well. A common economic area had ensured prosperity. The civil rights granted to all the people living in Roman territory had laid the foundation for a growing sense of togetherness - except when it came to religious practices.

On June 19, 325, Constantine intervened in a religious conflict. In order to smooth things over, he invited all Christian bishops to attend a council in Nicaea, near present-day Istanbul. The goal of the council, which was attended by more than 300 representatives of the church, was not to enforce Christianity as the state religion, but rather to establish a religious peace that would stabilize the Roman Empire. After lengthy debates, Constantine agreed to a creed which stated that God and Jesus are one entity. The signing of this creed effectively ended the persecution of Christians. 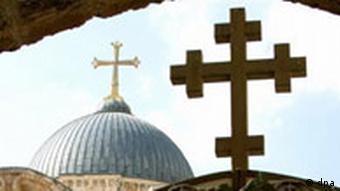 After the Council of Nicaea, Christians no longer feared persecution

But conditions were about to get even better for the followers of Christianity. On February 27, 380, in Thessaloniki, the Eastern Roman Emperor Theodosius I (347 - 395) signed a decree in the presence of the Western Roman Emperor Valentinian II (371 - 392) that made Christianity the religion of the state and punished the practice of pagan rituals.

But the exact text of this decree, gathered in the Codex Theodosianus XVI.1.2, didn't just outline Christianity's special status, it also permitted the persecution of non-believers:

"It is our desire that all the various nations which are subject to our clemency and moderation, should continue to profess that religion which was delivered to the Romans by the divine Apostle Peter… and which is now professed by the Pontiff Damasus and by Peter, Bishop of Alexandria."

"According to the apostolic teaching and the doctrine of the Gospel, let us believe in the one deity of the Father, the Son and the Holy Spirit, in equal majesty and in a holy Trinity."

"We authorize the followers of this law to assume the title of Catholic Christians; but as for the others, since, in our judgment they are foolish madmen, we decree that they shall be branded with the ignominious name of heretics, and shall not presume to give to their conventicles the name of churches."

They will suffer in the first place the chastisement of the divine condemnation and in the second the punishment of our authority which in accordance with the will of Heaven we shall decide to inflict."

Symbiosis of antiquity and Christianity

Thus, non-believers began to be persecuted with the same fervor that was once reserved for Christians and Jews. Pagan rituals were acts of high treason, temples and sanctuaries were destroyed as was the Oracle of Delphi, ancient Greece's legendary source of wisdom.

At the same time, February 27, 380 marks a milestone in European history, because on that day, Jewish-Christian roots were bound to those of Greek and Roman antiquity - a symbiosis that can still be felt today.

The early history of the Greeks and Romans and the Judeo-Christian tradition have made a decisive impact on Europe, for good and bad. Because during the coming centuries, it wasn't just the poor that were fed in the name of Christ; critics and dissidents were murdered in the name of the Lord as well.